Anyone who follows me on social media knows I love a good GIF.

When I first started covering the CFL I saw all these incredible, viral worthy moments in sports across your addictive platform of choice, then typed in ‘CFL’ on twitter and essentially got Chad Ochocinco hugging an official and Kerwin Bell attempting to curb his future child producing enthusiasm. That was it, but as a fan of the Canadian game I knew there was so much possibility.

So I started looking for the small moments in the stands, the jaw dropping plays and the sideline reactions that really tell the story and add personality to the X’s and O’s. 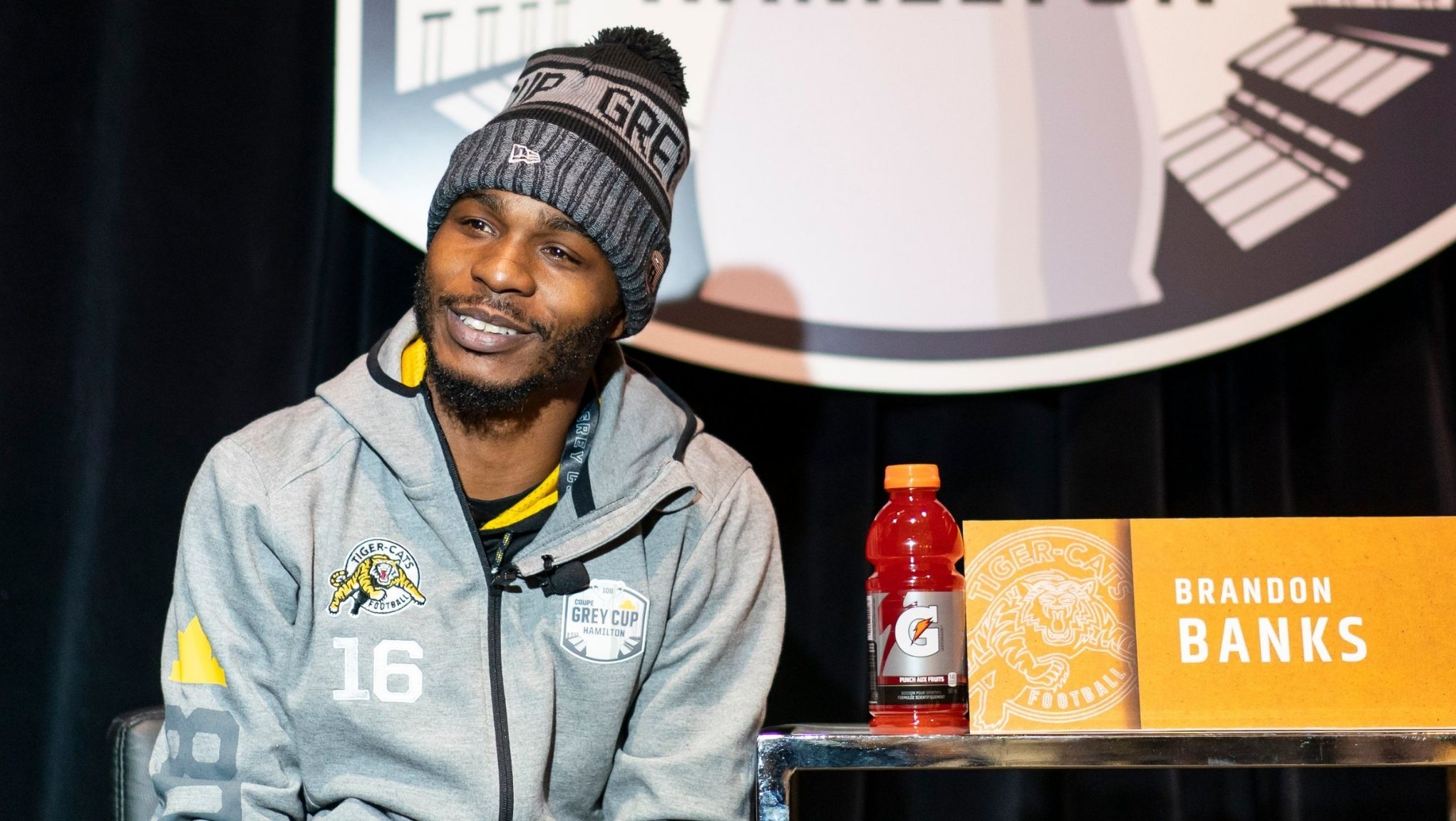 After spending his entire career with the Hamilton Tiger-Cats, Brandon Banks is now a member of the Toronto Argonauts (Thomas Skrlj/CFL.ca)

There has been no more GIF-able player in the CFL over my six years covering this league than former Ticat turned Argos receiver Brandon Banks.

There was the touchdown in Montreal where he found and handed the ball off to a Ticats fan wearing – what else – a No. 16 jersey before hugging the fan for his support.

The jaw dropping shin angles of the 2014 Eastern Final punt return touchdown where Banks shifts his lower legs back and forth so quickly you wonder how he’d ever get up to speed and outrun every cover man, which of course he did.

And there was the 2019 Labour Day Classic which saw Hamilton and Toronto meet at midfield while the clock struck zeroes in a friendly exchange of QEW commuter lane philosophies before the CFL on TSN Directors comedically cut at the perfect time to the diminutive Banks keeping out of the fray while holding the Harold Ballard Trophy above his head jubilantly signifying a season series victory over the Argos.

In Hamilton Banks has been electric. A burst of energy would permeate around Tim Hortons Field anytime he would jog off the sideline to potentially return a long field goal attempt. A buzz would grow if he caught a reverse or quick slant at top speed. He’s the kind of entertainment value that makes spending your hard earned dollar well worth the parking, transportation, and seat.

While Hamilton announced the parting with Banks was mutual, some reports since have called into question the family friendly version of events with Banks willing to take less to stay with the only CFL team he’s ever known. Hamilton let him go ahead of free agency, then things went eerily quiet for a player of his caliber, the league’s Most Outstanding Player just two seasons ago.

By landing down the road in Toronto, Banks becomes another in the long line of CFL players who distinctly identify with one fan base, but suit up in opposing colours when the fit is right.

I’ve worked on radio with Mike Morreale who has tremendous memories and success with both. I threw with Dave Stala the morning No. 88 learned he was signing in Toronto after growing up in and suiting up for Hamilton over five seasons. Steinauer, O’Shea, the list goes on and on with Banks becoming the new poster boy for a rivalry re-ignited that was already lit ablaze after Hamilton’s Eastern Final victory at BMO Field this past November.

Banks’ journey is unlike just about any other player to ‘controversially’ switch clubs in recent memory. From the best player in the league, to one season in an offence where everyone experienced regression and *SNIP* he’s gone.

It has all the ingredients for delicious storylines and stunning heartache at Tim Hortons Field if Banks returns to incite fear in the Hamilton faithful. Those are the same emotions that black & gold fans spent much of the past decade giggling at while watching their Argos friends and family biting their nails every time the football came within arms reach of Speedy.

All of this seems like a good time to remind you that between August 6 and September 5 this year the Hamilton-Toronto matchup of Banks vs. Tunde Adeleke, Dane Evans vs. MacBeth, Henoc Muamba vs. Simoni Lawrence and many more will play out four times.

With former Ticats QB Jeremiah Masoli assuming the leading role in Ottawa, Banks on a revenge tour in Toronto and Hamilton attempting to hold on to make a third-straight Grey Cup, the East Division has explosive potential in 2022 with former Ticats core players leading the charge in a variety of places not called Hamilton.

Get ready, because you know these guys will be from the first snap in June.