Ever sit back and just think about how long the pandemic has been, how much has happened since March of 2020 and — most significantly — how much has changed?

I know I do, almost daily as I log onto zoom calls, socially distance and recognize N95s. All of which qualified as a foreign language just a year ago

If you’re anything like me, the sense of a skewed, never ending timeline extends directly into your love for Canadian football with no more seismic evolution than what the Toronto Argonauts have done at quarterback.

In 2019 it was McLeod Bethel-Thompson leading the Argos, with Dakota Prukop and Canadian Michael O’Connor watching from the sideline.

Prukop and O’Connor are now Stampeders.

Bethel-Thompson was released to pursue NFL opportunities during the pandemic before landing in The Spring League and recently returning to Toronto in a move to solidify the Argos’ most important positional grouping.

Way back in ‘the before times’ I wrote an article here on CFL.ca setting the stage for Bethel-Thompson and Matt Nichols to battle in 2020 training camp.

Nichols would never play a snap in Toronto, before essentially being flipped to Ottawa for Nick Arbuckle in the most predictable — yet wildly entertaining — transaction of the pandemic.

Here we are, finally readying for a return to action with Arbuckle and Bethel-Thompson, the key components of a quarterback group five deep for training camp.

On the surface this is Nick Arbuckle’s job, an opportunity to shine in a system designed by his former Calgary coach Ryan Dinwiddie. The Double Blue party line is that Bethel-Thompson has been re-acquired to ‘add locker room leadership and make the team better.’

The reality is that no quarterback is signed solely on their ability to bring the team together and always find the right song to blast in the locker room after practice. Bethel-Thompson can — and will — put the ball anywhere on the field with above average accuracy and possesses a natural instinct for when to pull it down and make defences pay for reading his book by its cover.

In Arbuckle, Toronto targeted and acquired a sound decision maker with boundless potential, pinpoint progression reading and a fighting spirit between the lines unique to a player of his limited CFL experience.

Toronto has two very talented quarterbacks who play the game two very different ways; at least in 2019 as seen from their attempt and completion heat charts. 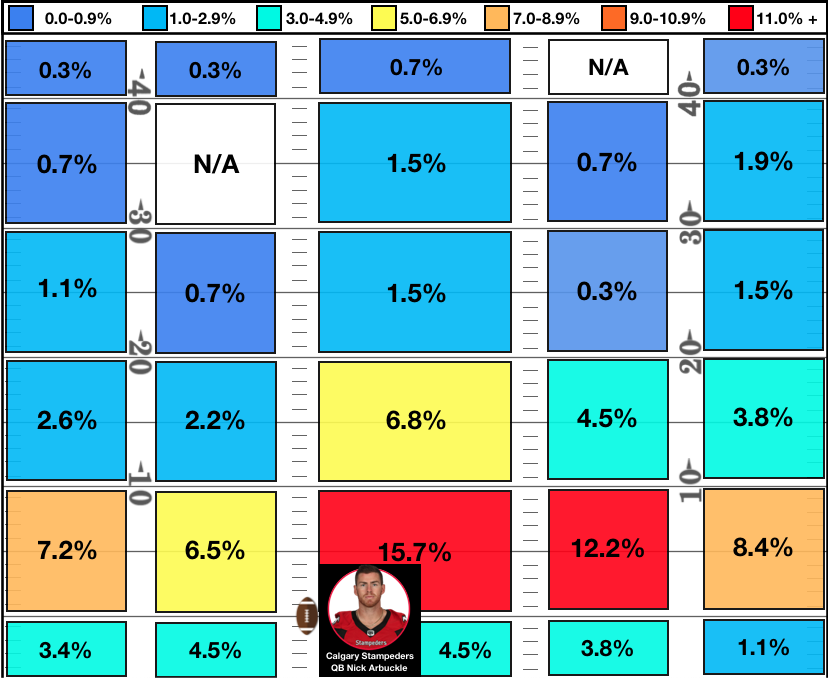 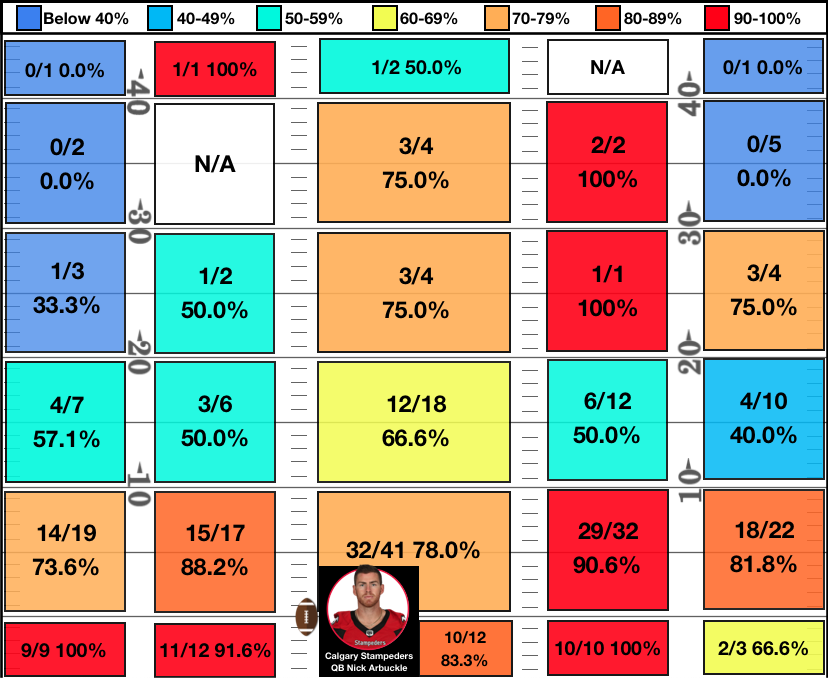 Arbuckle was a strong side seam ball thrower with a willingness to challenge the middle of the field more than Bethel-Thompson and threw a higher percentage of attempts behind the line of scrimmage than any 10-yard interval beyond 10 yards in the air. 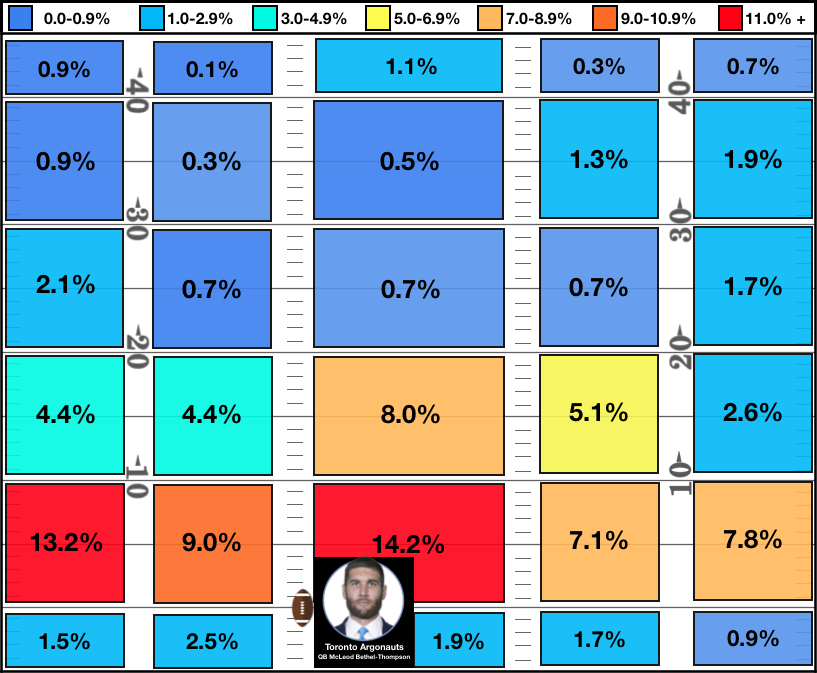 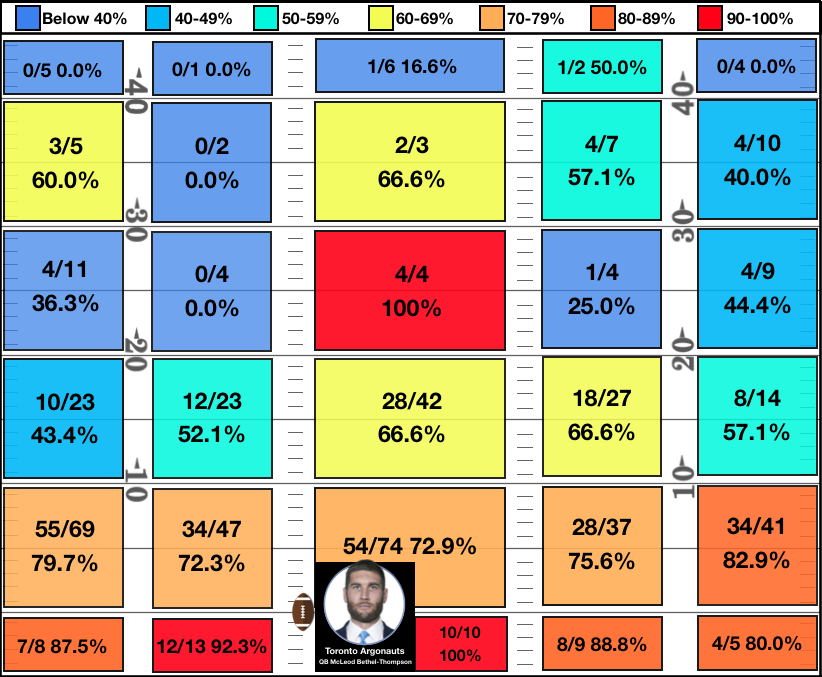 From this understanding numerous questions arise.

How much will Arbuckle’s game evolve beyond the white horse shadow of Bo Levi Mitchell? Can he push the ball more effectively down the field or continue to maintain a below average air yards average? Will Bethel-Thompson be able to prove 2019 late game yardage compiling can become consistently meaningful production? Will either quarterback separate themselves clearly in a unique 21-day training camp (based on reports of what camps may look like)?

All these questions, and many more behind closed Toronto doors will decide the direction the Argos’ offence takes in 2021 and largely how the team will fare with a vastly improved defence that’s sure to add support unseen for large chunks of 2019.

Arbuckle has spent what must feel like an eternity waiting for this opportunity, be it in Ottawa or Toronto and undoubtedly has been plying his craft in preparation for a pressure packed debut as ‘franchise man.’

Bethel-Thompson is never one to lay down without a fight, possessing the technical knowledge and in-game experience to make unique CFL-required throws on a consistent basis.

Both deserve a real shot to outplay the other in a training camp setting against a stout defence and give Toronto the best chance to win in a 14-game sprint where one or two woulda-coulda-shoulda losses could mean missing the playoffs.

Whether or not a real competition unfolds?

Your guess is as good as mine. Hell, 15 months ago I thought Nichols would sail to Argos stardom.