I’ve always been fascinated by method actors and actresses. Heath Ledger refusing to take off the Joker’s sweat-stained custom purple suit and face paint during taping of The Dark Knight; Christian Bale maintaining all of Dick Cheney’s vocal cadence and physical mannerisms between shots while creating Vice and of course Daniel Day Lewis in…everything.

I never thought I’d be able to relate, but here I am, 12 hours after getting four wisdom teeth ripped out of my head, drooling blood like the final scene of Sylvester Stallone in, well, anything.

It just so happens that I picked this date a while back to write about one of the first great Grey Cup rivalries, the Winnipeg Blue Bombers and Hamilton Tiger-Cats matchups of the 1950s and 1960s.

These two teams would meet six times over the span of nine championships, with only Joe Kapp’s BC Lions and a young Russ Jackson getting in the way of damn near a decade of final game showdowns, an unthinkable streak in any sport or time period.

Nevertheless, Winnipeg and Hamilton would meet in 1957, 1958, 1959, 1961, 1962 and 1965. After immersing myself in these matchups, a swollen jaw comforted with world class pain medication and a little blood suddenly seems insufficient to relate.

Hamilton’s ferocious defence and Winnipeg’s aggressive running game would surely leave most everyone involved feeling this swollen from head to toe after most games. That makes the fact that they somehow all climbed off the mat to finish the final 9:29 of 1962’s Fog Bowl that much more incredible.

The era was intensely physical, which makes it that much more unlikely that Hamilton and Winnipeg were able to reach the final game of the season so many times. They wouldn’t meet again in the Grey Cup until 1984 and the last time we watched Canada’s favourite national celebration it was the same two combatants facing off, with the Bombers advancing their head-to-head Grey Cup record to 6-2 over the Ticats. With that deep history in mind, let’s wipe the blood of our collective chins and take a closer look at the ’50s and ’60s matchups, beginning with passing proficiency. 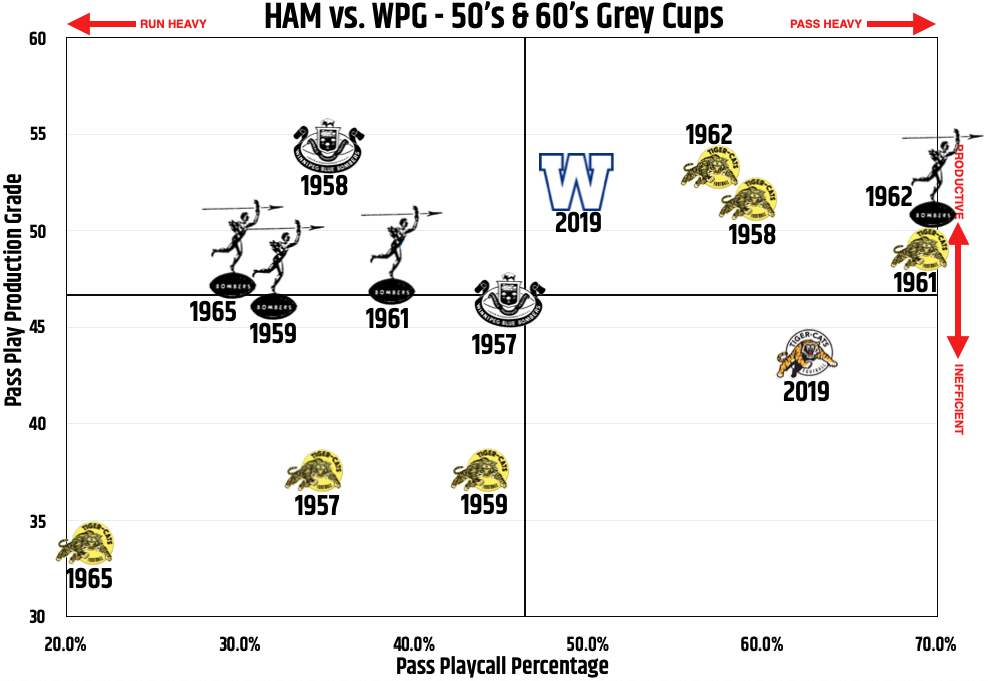 Right away you can see the clear style and preference of the Bombers appear. Less pass play calls, heavy on the run. Who can blame them, with the lines of Leo Lewis, Gerry James and Ken Ploen running the backfield show? When Ploen did take to the sky, his favourite target was six-foot-two receiver Ernie Pitts, who made big plays in nearly every one of the six Grey Cups examined.

Stunningly, BOTH teams attempted exactly 174 passes in the six championships combined. Winnipeg had 13 fumbles to Hamilton’s 14 and both teams’ quarterbacks scrambled on 5.3 per cent of called pass plays. All of this drives home just how closely matched Winnipeg and Hamilton played each other, despite differing approaches. Adding to the amazement of these games’ historical context, Hamilton’s pass attack in 1958, 1961 and 1962 would reach a higher production grade than Hamilton’s 2019 offering as shown above.

The one pass happy Winnipeg Grey Cup jumps off the page for two reasons. The first of course being that it was the Fog Bowl and Winnipeg decided to keep throwing through the mist. The second is that Hal Ledyard, not Ploen was the star of the Bombers show, completing 14-18 passes (77.8 per cent) for 223 yards in the iconic win, just 11 years before a tragic drowning accident would claim his life. 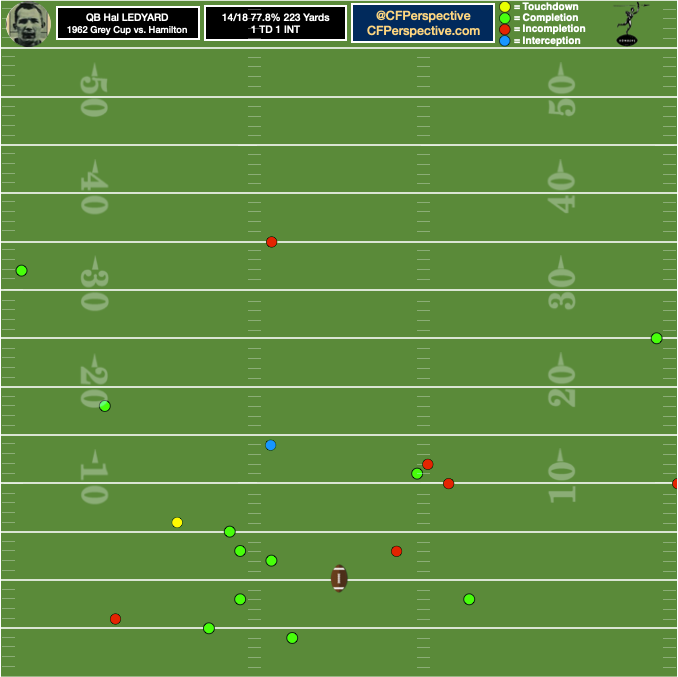 Here’s Ploen’s collective targets through those six games working amongst Ledyard, Jim Van Pelt, Barry Rosebrough and non-quarterbacks who had pass attempts, in Dennis Mendyk and Leo Lewis. Lewis is 4-5 for 57 yards and a touchdown in his Grey Cup career. 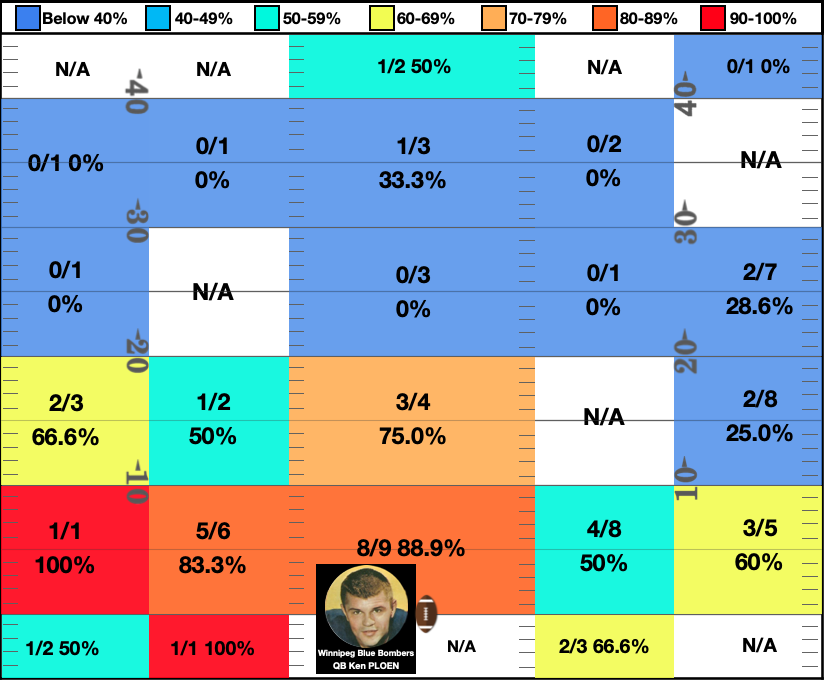 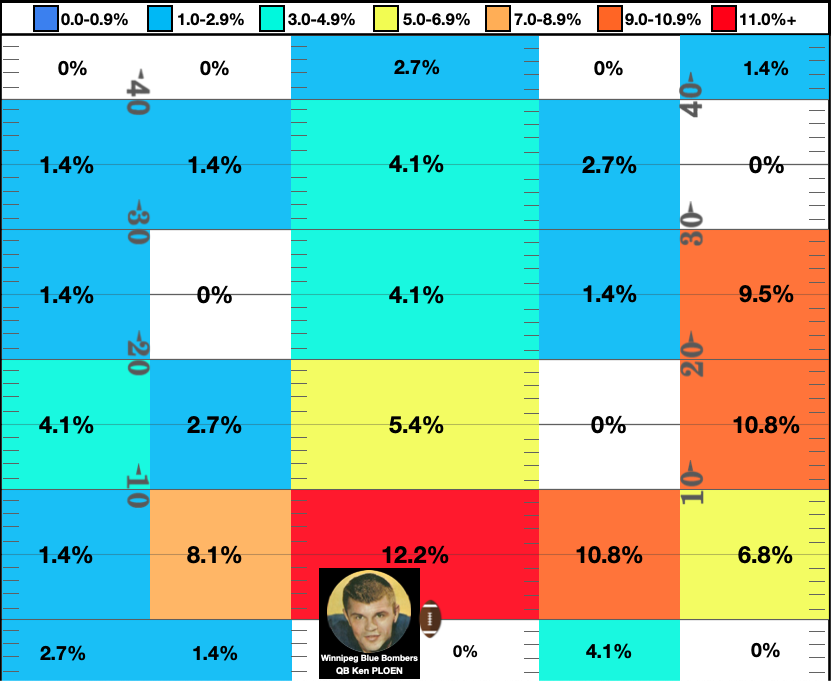 Compare that to the same metrics of Hamilton QB Bernie Faloney, who led the Black and Gold passing by a wide margin, despite Joe Zuger and Frank Cosentino taking their opportunity to lead Hamilton’s huddle. 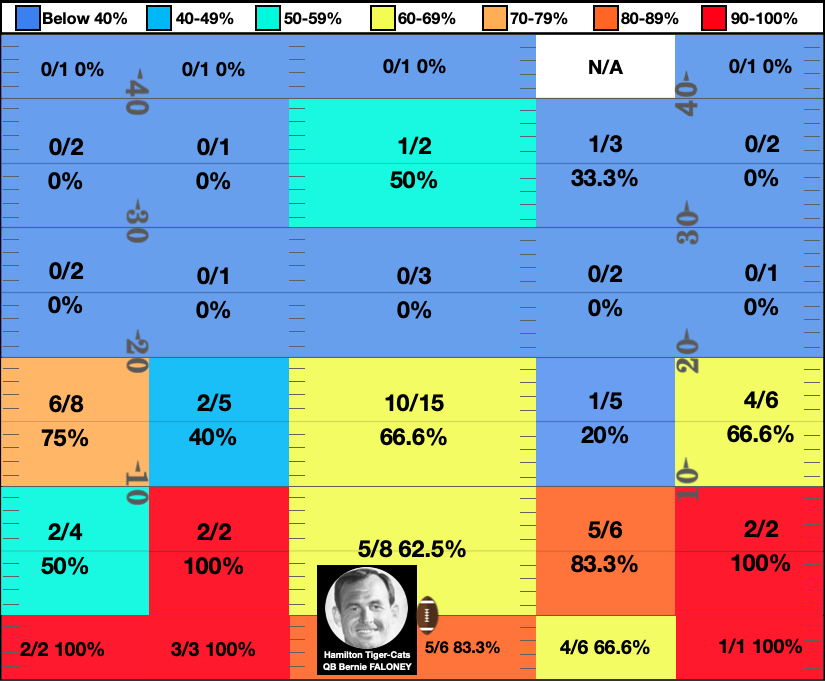 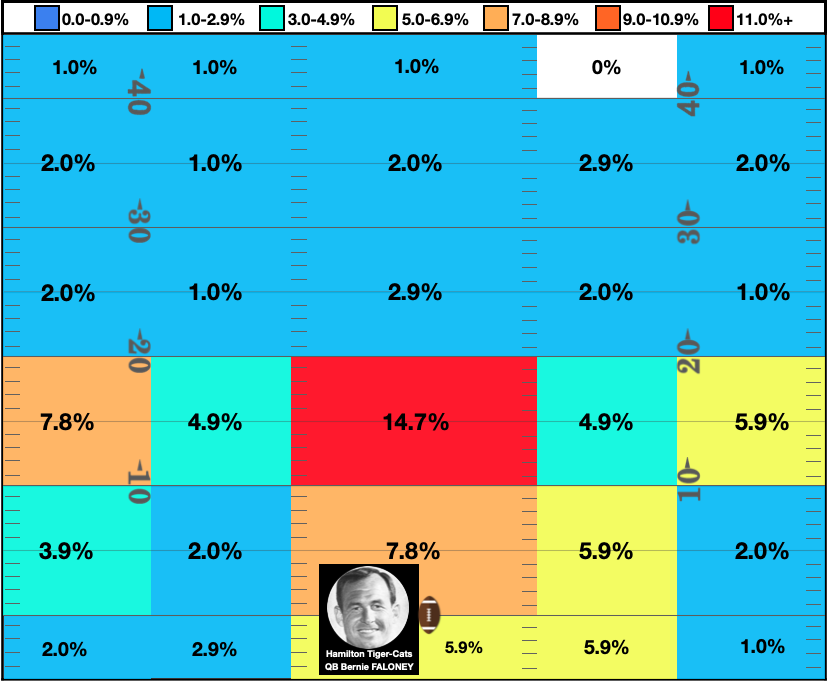 Faloney was one hot spot short of a full bingo card in his Grey Cup starts against Winnipeg, while challenging all areas of the field more vertically than Ploen. But it was the efficient running attack of the Bombers that would lead to a 4-2 record by the end of their last Grey Cup duel. 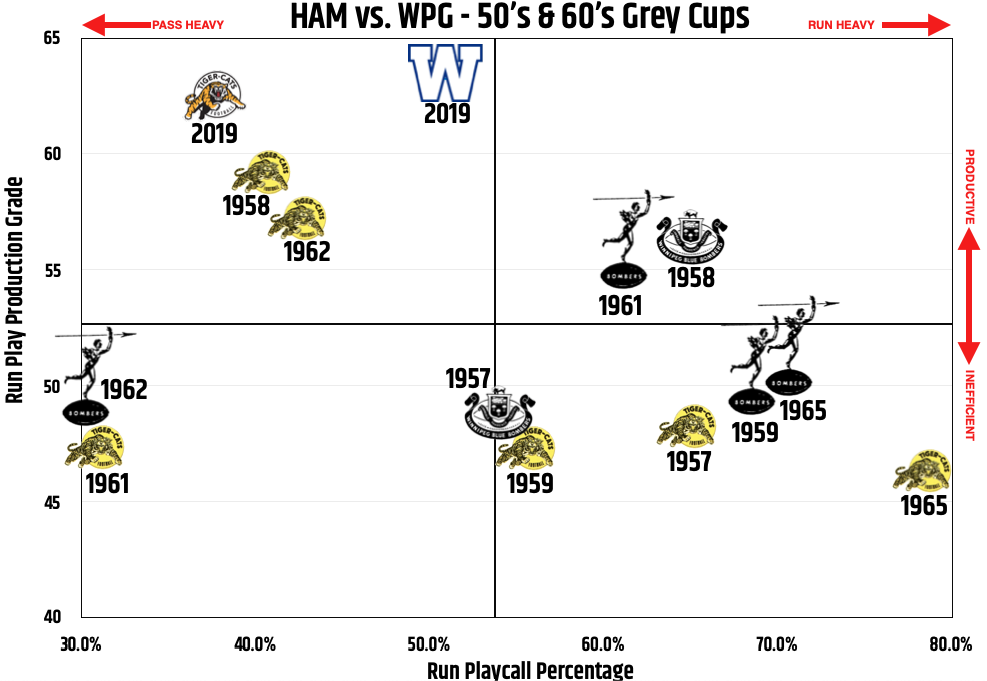 The Andrew Harris-led Bombers’ run game in 2019 did not reach the level of run-heavy play calling established in this bygone era, but they did set the production grade record through seven studied Bombers-Ticats Grey Cups. They likely would have challenged the Ploen, Lewis and James era had Chris Streveler stayed the starter through the playoffs without the Zach Collaros acquisition.

My final and favourite part of these Grey Cup revivals: The usage and productivity of receivers and running backs across all six games. 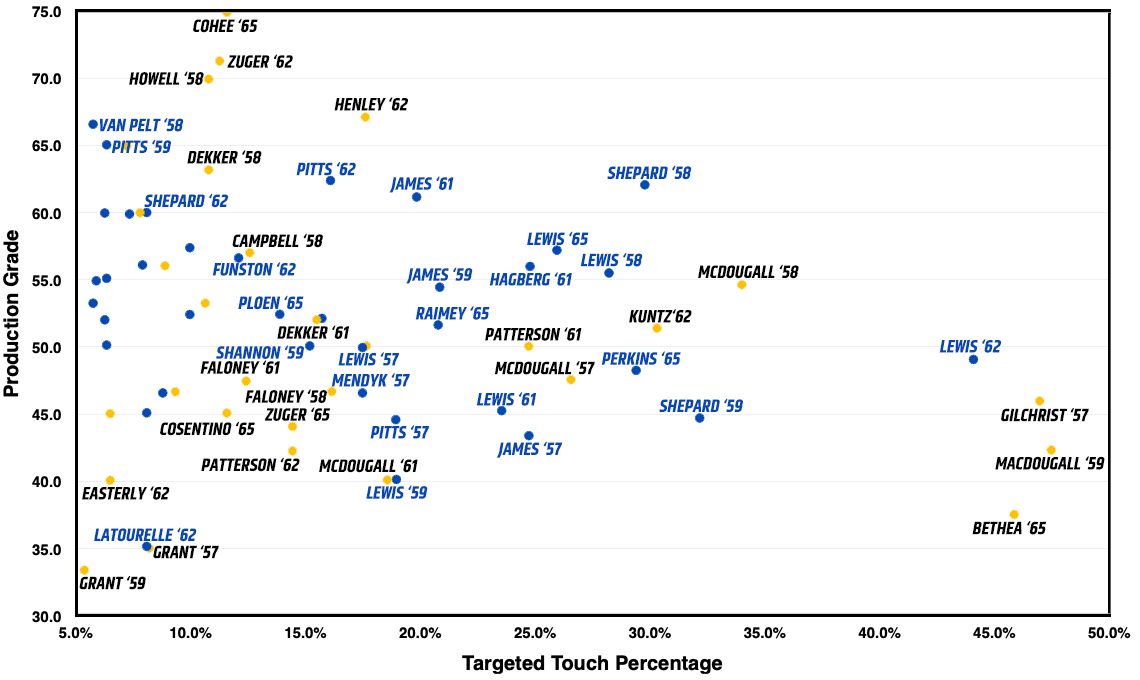 The Bombers’ run game was an unrelenting attack so deep with talent and names like Perkins, Lewis, James, Hagberg, Shepard and more, while Hamilton clearly attempted to rely on the power of a single man attack with Cookie Gilchrist in 1957, Gerry McDougall in 1959 and Willie Bethea in 1965. That’s not a bad plan considering they won their only two matchups of the six behind Gilchrist and Bethea while Garney Henley deserved more touches in the 1962 classic based on his ability to outproduce his contemporaries.

There are endless what-ifs that a revisionist could argue changed the path of CFL history. Would Hamilton have stormed back if the 1962 game was completed in the fog? Did a coin flip do in the Ticats for 1965’s Wind Bowl, as they called just 21 per cent passes in hopes of surviving to a close finish?

All of that is up for debate with Ticats’ and Bombers’ alumni now in their 70s and 80s, or to a fascinated 20-something like myself, who sees so much rich history in these iconic matchups that defined an era of Canadian Football.