I cringed hitting send on this.

Full disclosure, I’ve been trying to write this article for about a month, constantly pushing back the deadline to the annoyance of the always understanding CFL editorial staff Kristina Costabile and Chris O’Leary.

Why push back writing a true football article analyzing my favourite CFL story?

Was it the amount of draft coverage we tried to create this year? Maybe.

The weather? No chance, it’s been cool and cloudy all spring here.

The pandemic? Finally, something that can’t be blamed on COVID.

RELATED
» Watch every Grey Cup on the Grey Cup on Demand Portal
» Steinberg’s MMQB: Sophomores in for a stellar 2021 campaign
» The Wait Continues: Could ‘futures’ picks one day pay off?

The real reason for the delay is that there is nothing more difficult than writing about your heroes, of which Russ Jackson is certainly one of mine.

Last year I sat down with Russ for over three hours as he seamlessly swung from thoughtful re-telling of life events more than a half century old to drawing up game winning X’s and O’s from a career rarely seen before, and not close to being recreated since.

Woven through that cherished afternoon were tales of the four Grey Cups Russ starred in. Over a twelve year career, Jackson would play for the CFL’s ultimate prize, four times in 1960, 1966, 1968 and 1969 before retiring when he arguably had more on-field success stories to write with an arm that remained every bit as accurate and powerful as the day he entered the league.

Like most ‘younger’ people, I’ve known Russ’ name for a long time and have seen enough clips to have a basic understanding of his game, but I’ve always wanted to look deeper into the style, tendencies and the overall approach that pushed the name Russ Jackson to become synonymous with Canadian football greatness for generations.

To do so, I watched back all four of his Grey Cup appearances with a close eye and what I found only deepened my appreciation for the soon to be 85-year-old icon.

We begin with a look at every Jackson throw from his Grey Cup games. 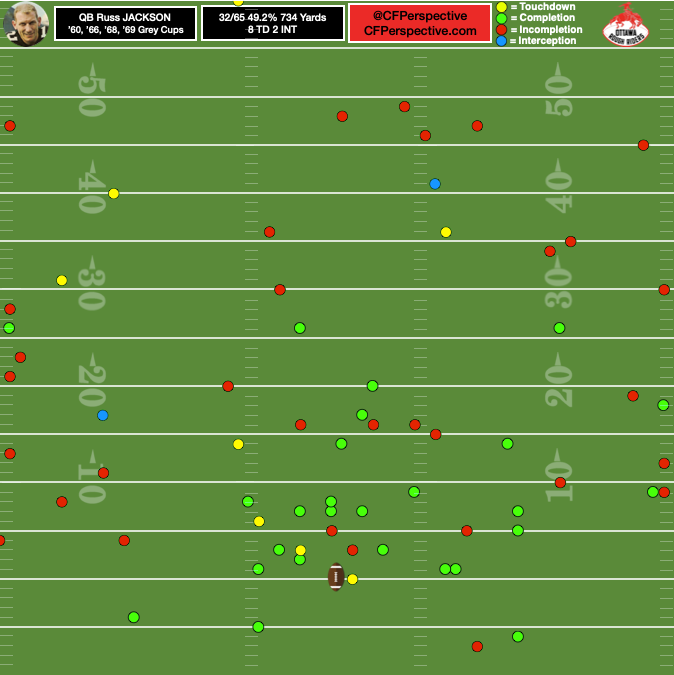 Watching these games in sequence is to watch the modern passing game come to life, but Russ wasn’t just throwing the ball, he was throwing it everywhere. The above target chart looks more like something you would see from Mike Reilly or Bo Levi Mitchell than a quarterback of the lava lamp, bell bottom era of CFL football.

To carve this style out at a time when a consistent full-field aerial attack was rare is one thing, but to do it after being an option quarterback drafted as a defensive back is an entirely different level of brash accomplishment. 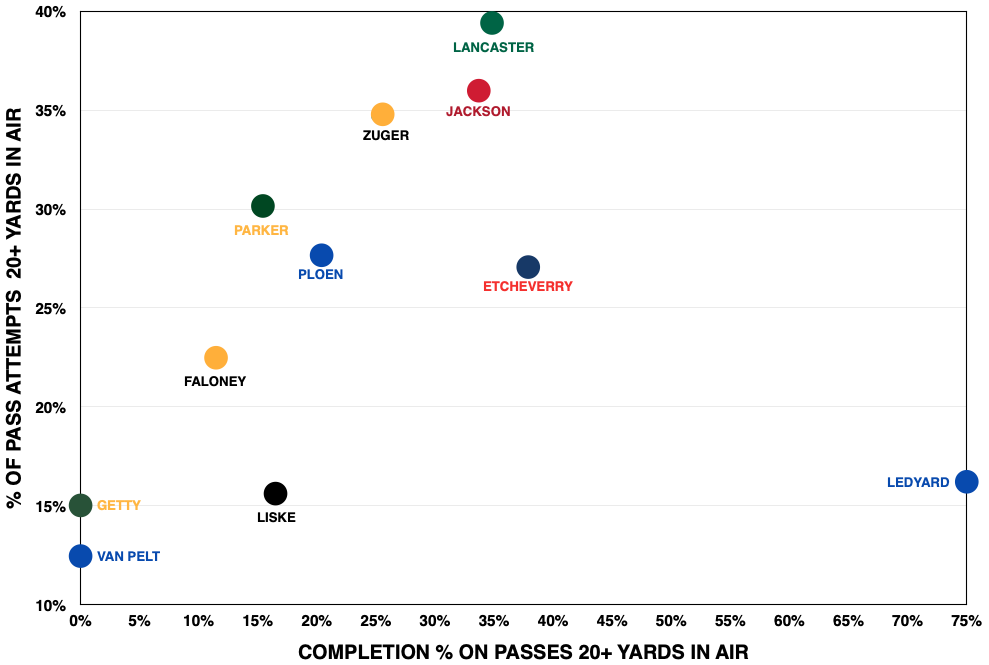 Ron Lancaster and Russ Jackson were in a league of their own at the time in downfield passing persistence and success. Fitting, since both took snaps for Ottawa in Jackson’s first Grey Cup appearance – Jackson took 54 while Lancaster subbed in for 12 and the two would go on to battle in two Grey Cups (1966, 1969) before Beatlemania gave way to disco.

These numbers don’t tell the full story that watching the games do though. While Lancaster has a higher percentage of pass attempts 20 or more yards in the air (39.2% to Jackson’s 35.8%), his air yard average (16.5) in their two head-to-head matchups is barely higher than Jackson’s (15.6) and was inflated chasing down 18 points in 1969 as Jackson dinked and dunked to control clock and the final valiant lead of his career.

My favourite stat though really separates Russ in the extreme deep ball category. From 1954 to 1969 there were thirteen quarterbacks who attempted at least ten passes in Grey Cups. Those thirteen qualified passers attempted 607 throws, of which only fifteen travelled forty-five yards in the air or more.

Russ Jackson has seven of those fifteen throws.

The other ten quarterbacks had one or zero.

Russ challenged the defence in bold – and sometimes chaotic – ways reminiscent of all the great passers to come since. A natural instinct of when to take the shot matched with an overpowering arm and a never-ending want to push the ball downfield combined to form his identity and much of Ottawa’s offensive success.

It would have been easy to rely on the deep ball, never looking for ways to innovate or improve, but forever a student of the game and an educator to many in the Ottawa area at the time, Jackson knew an evolution was required. 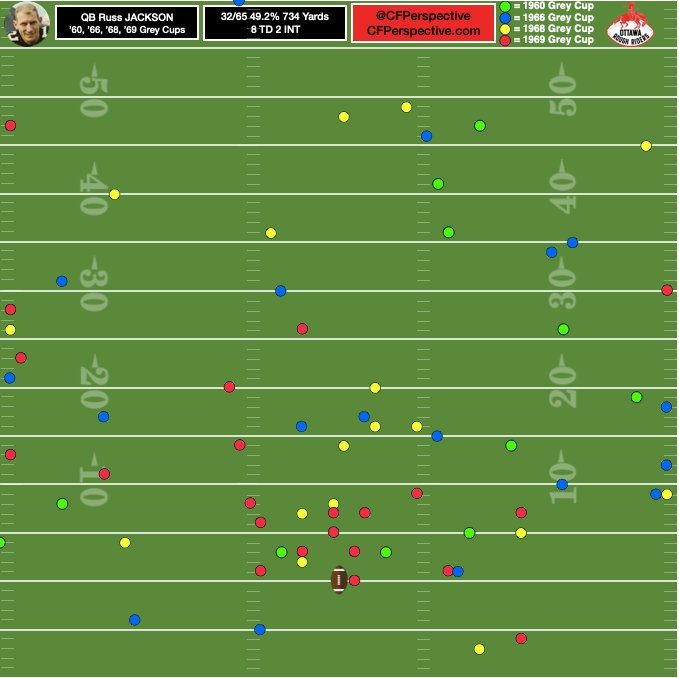 As he aged, the air yards per attempt dropped from 20.1 in 1966, to 19.8 in 1968 and finally a seismic drop off to 11.9 in the 1969 Grey Cup, but as is usually the case Jackson simply traded in the air yards for yards after the catch. The year-to-year comparison above shows the shift.

Only once in a Grey Cup did an opposing quarterback throw for more air yards than Russ Jackson. In 1969 Lancaster averaged 14.9 air yards to Jackson’s 11.9. Jackson held the trophy high overhead at the end of the day after posing with Prime Minister Pierre Trudeau for one of Canadian Football’s most memorable photos.

My final question – for now – was just which skill position players did Jackson target the most, and who did he get the most value out of? 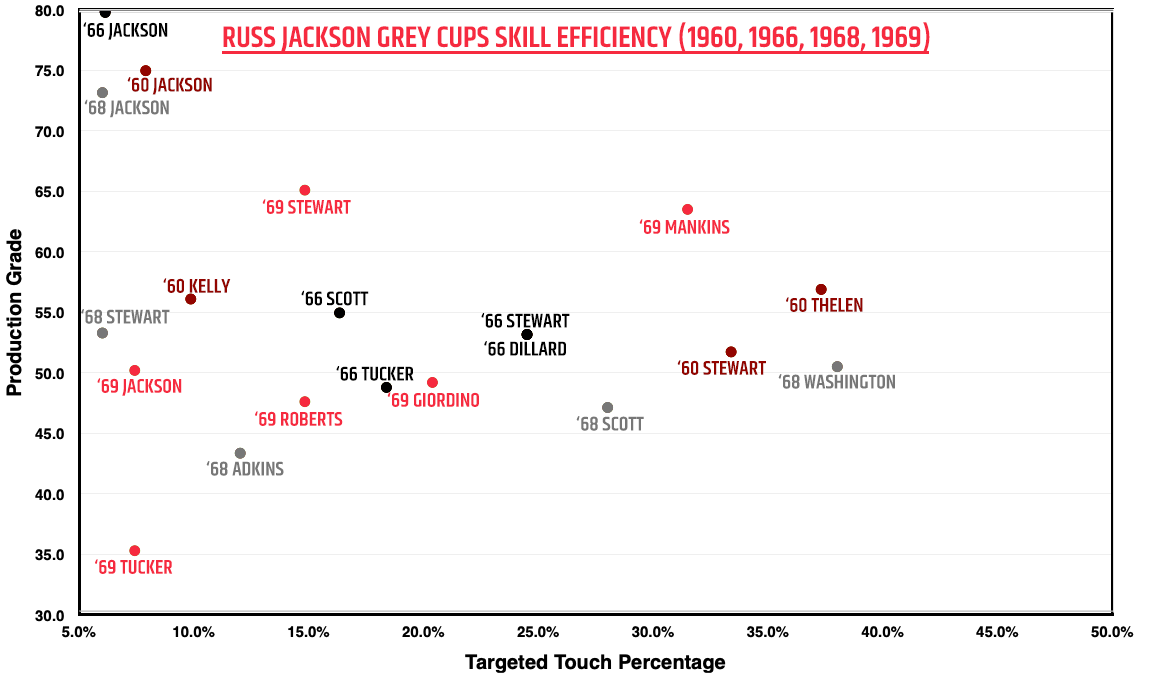 Based on longevity with the team, Western Mustangs grad Whit Tucker actually led the way in Jackson Grey Cup targets over Margene Adkins and Ron Stewart.

Tucker was thrown fifteen balls over Jackson’s four Grey Cup games only catching five balls for a lowly 33.3% completion rate, but two of his five catches resulted in touchdowns in the 1966 classic against Saskatchewan.

Whether you like the romance of a Canadian pivot raising the Grey Cup, the self awareness of an athlete at their peak willing to evolve, or just a strong armed quarterback, the Russ Jackson story and style has a bit of something for everyone.