What is the true value of a running back in the modern CFL?

Yes, they can pound the rock for you on second and short and occasionally they’ll pop a screen pass for big yardage in a game-changing display of burst and vision but how do you know when YOUR running back is special and worth investing in?

My good friend and Saskatchewan Roughriders radio voice Derek Taylor has long believed that with each Johnny Augustine stepping in for Andrew Harris or Jackson Bennett replacing Don Jackson, we step closer and closer to a world where running backs are dime a dozen, all with a similar value and return on investment.

When I looked at the potentially available free agent running backs back in December, the bulk of names were in the good, usable but not special – at least so far – class. But when Calgary signed Ka’Deem Carey to an extension it felt like a marquee name had come off the board, and the fit returning to Red and White couldn’t be better.

Leading into 2021 after the pandemic cancelled our 2020 season, Dave Dickenson spoke about the running back position with great confidence for the first time since Jerome Messam or even Jon Cornish. Dickenson explained how Calgary had tried to piece together multiple names due to injury in 2019, but when healthy Carey was the guy he wanted in there the most saying, “when he’s in the game, we’re better.”

The most important ability in football is availability and Carey proved he could take the full season workload in Calgary this past year while the quarterback position was riding it’s own injury wave and receivers were trying to find their fit in an offence that felt less potent relative to years past.

Carey didn’t just exist though, he consistently produced and at times excelled. Any consistent viewer of the CFL on TSN knows that once a game the camera was bound to land on Carey’s smiling sideline grill following a big gain or score as he smiled and delivered shoutouts to those who care about him back home.

Just HOW good was Carey in 2021? In simple terms according to his agent, good enough to earn the biggest American running back contract since Ricky Williams signed in Toronto.

Analytically his value can be proven in several metrics as well, with my favourite being a look at the percentage of called rushing attempts he carried for his team vs. production grade on those carries. 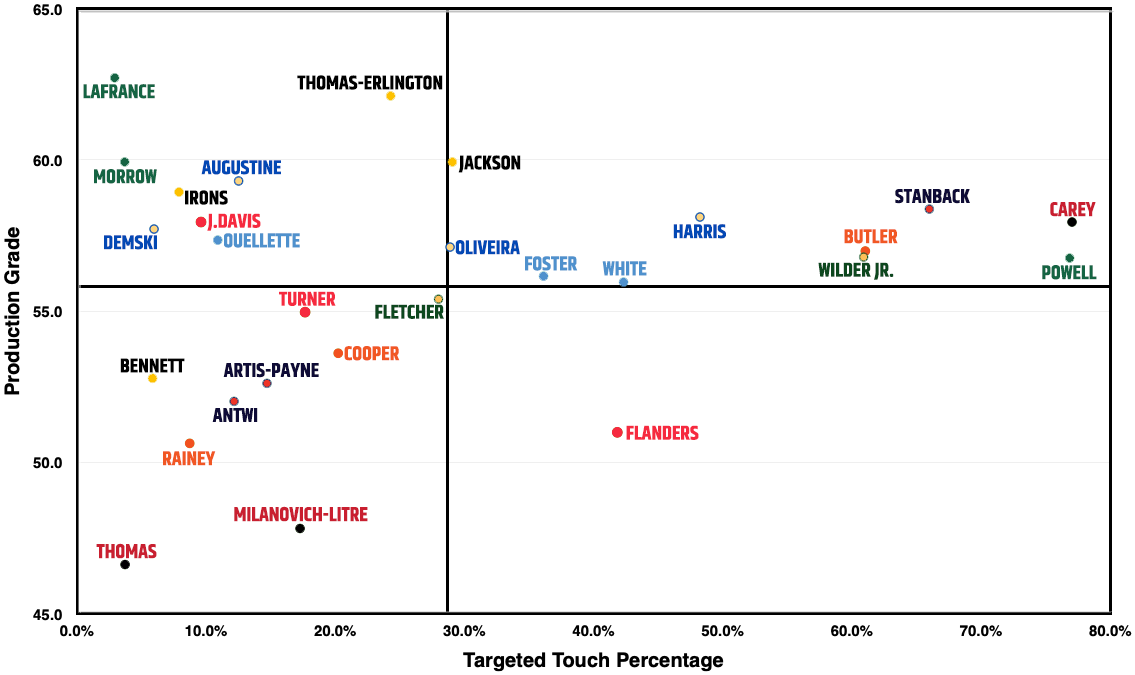 In 2021, no backfield ball carrier possessed a higher combination of workload and success than Calgary’s Ka’Deem Carey. He was more effective per touch than William Powell, who got slightly more work, and carried the ball for a higher percentage of team rushing attempts than Edmonton’s James Wilder Jr. or even Montreal’s William Stanback.

With Bo Levi Mitchell’s contract re-structured, a re-built offensive line a year wiser with veteran leader Sean McEwen already putting pen to paper and a pair of game changing receivers happily returning for 2022 in Kamar Jorden and Reggie Begelton, Calgary has the makings of a high-powered attack once again.

Make no mistake how important Carey is to solidifying that understanding across the league. When Dave Dickenson is at his best as a play caller, he is equal parts route diagramming wizard and brute running game believer. Carey gives Calgary the ability to go off tendency and trust that success will follow.

The question now becomes what does the chart above tell us about the rest of the 2022 pending free agent running back class? While we’ll have extensive coverage before, during and after February 8 when free agents officially become available, it boils down to this for me.

Andrew Harris and William Powell are the biggest names left based on pedigree, but there are plenty of diamonds hidden just under the surface ready to explode from a three man rotation and earn their starring role as Carey has.

Namely, Sean Thomas-Erlington who – for the third year in a row – owned the CFL’s highest production grade per carry for a player below CFL average workload for the position. Could STE jump ship from Hamilton to BC, Toronto or as a game changing pace breaker elsewhere?

If he does and results follow, Carey could have some competition in 2022 for best running back in the CFL.