SURREY — You have to be good to be lucky. Or is it lucky to be good? However the saying goes, it doesn’t necessarily apply to Rodney Darnell Whitehead Jr. He was just born with that God-given talent. As the Lions’ new receiver explained on our latest episode of 1st and Now, the nickname ‘Lucky’ just stuck pretty much from the moment he was born. It came at the suggestion of his cousin, Ira Anderson.

“They were visiting me at the hospital and kind of asked the doctor what room number and where my mom was. They get to the delivery room and my cousin’s first question was, where’s Lucky?’ And my mom responded ‘who was that?’ My cousin made up the nickname Lucky and it’s been with me since.”

No other explanation than that, really. It became his calling card. Even from immediate family members.

“All the time, unless I’m in trouble, ” he chuckled.

RELATED
» CFL exploring opportunities for alignment with XFL ownership
» The Way Too Early Power Rankings are in
» Steinberg’s MMQB: Meet the woman behind CFL.ca
» O’Leary: Canadian Football loses a giant in Chris Schultz 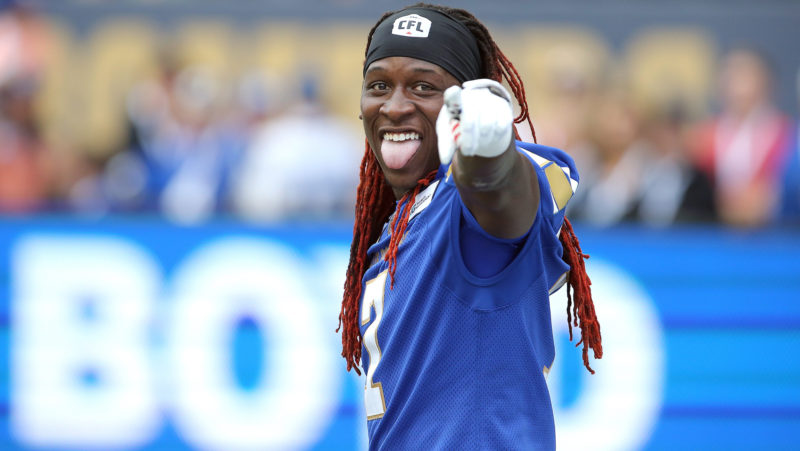 Lucky Whitehead signed a contract with the BC Lions on the opening day of 2021 free agency. (Jason Halstead/CFL.ca)

Say what you want in terms of this year’s free agent frenzy not actually being one. But you’d have a hard time believing Lions brass wasn’t doing a collective virtual fist pump when Lucky told them he was coming in the early hours of February 9th. A player that was on the radar of US Scouting Director Ryan Rigmaiden a few years back in his first stint in the Lions front office, Rigmaiden ended up getting him to sign with the Blue Bombers ahead of the 2019 season.

The native of Manassas, Virginia stood out from the start of camp. In 15 games before an injury ended his season prematurely, Whitehead would go on to record 1,355 combined yards (746 coming on returns) and three touchdowns while quickly establishing himself as one of the league’s most dynamic playmakers. It was Rigmaiden, former teammate Marcus Sayles and quarterback Mike Reilly who all played a big role in recruiting Lucky to the west coast.

“He (Mike) actually called me one day and we talked for about 45 minutes,” said Whitehead on the recruiting process.

“He was kind of breaking down the offence but he was like ‘I can’t really dive in the way I want to dive in because if you don’t sign here, now you know our offence’ type of deal. We had a great conversation. It was kind of just going over the expectations, what my expectations were, where he sees me playing fit, so I was just like ‘okay, this is all making sense.’ I definitely want to be a part of that, I definitely think we’ll have a great connection and it will be fun.”

The Lions are also getting a guy with experience on both sides of the border. The dynamic Whitehead moved north following a stint in the NFL that included two seasons with the Dallas Cowboys where he recorded 1,404 combined yards and listed a kickoff return touchdown against the Los Angeles Rams in the first pre-season game back at LA Coliseum as his best memory with the squad.

The Story Of Lucky And Blitz

Not many folks can say their dog was held for ransom. It was while he was still playing for Dallas and visiting a friend in Miami where Lucky’s nickname for sure held meaning in getting out of a potentially tragic situation. He had left Blitz, an English Bulldog who was less than a year old at the time, with a friend who left the house unlocked and unattended one night. Then it got bonkers.

“Someone pretty much came in, took the dog, a couple of shoes and some other small things. I got a call asking if I sent someone to pick up Blitz and I was like, ‘no.’ And he was like, ‘well he’s not here,’” recounts Whitehead.

Somehow, Blitz ended up in the possession of Fort Worth rapper Boogoti Kasino. Upon arriving back in Dallas, it became an even scarier situation.

“I had gotten a call at the airport asking how much the dog means to me and would I be willing to pay to get it back. My nerves were just all over the place at the time. My flight was probably like three hours and it felt forever. Once I got to my house the cops were already there checking the crime scene, doing everything. I was just trying to gather information at that point.”

Once the dust settled and Lucky got Blitz back, it quickly became clear what the motivation for the rapper was. He received an Instagram message from someone saying Blitz was dropped off at their studio by a person offering to sell him to them.

“He had posted that video (on social media) and he had messaged me back saying ‘I didn’t think the video was going to get out there like that. I was just trying to promote my music. ‘ That’s what that came down to. I got my boy back and he’s kicking it,” said the happy dog owner.

Lucky was excited to know that under normal health guidelines, the team’s facility is very friendly to both staff and player pets. Now he looks forward to reporting to camp and fitting in the best he can with fellow playmakers Bryan Burnham, Lemar Durant, Shaq Johnson, Dominique Rhymes and the rest of the cast of exciting characters being put together in this offence.

“I want to win another championship. I feel we can do that in BC.”