TORONTO — As we inch closer to the opening of the free agent market on Feb. 8, we’re in position to see a number of high profile players become available.

Near the top of that list should be Hamilton Tiger-Cats’ defensive lineman Ja’Gared Davis.

The 31-year-old had six sacks in 2021, along with 39 tackles through 13 games. Davis sits at No. 4 on CFL.ca’s top-30 pending free agents list and is the top-ranked defensive player in the list.

“He’s in the top-five of CFL sackers over the past five years due in large part to the variety in his pass rush moves,” CFL.ca’s Marshall Ferguson said of Davis.

“He’s adaptable to any scheme and simply finds a way to create mayhem in the back field, all with his trademark low key smile and laid back personality, which endears him to everyone in the locker room.” 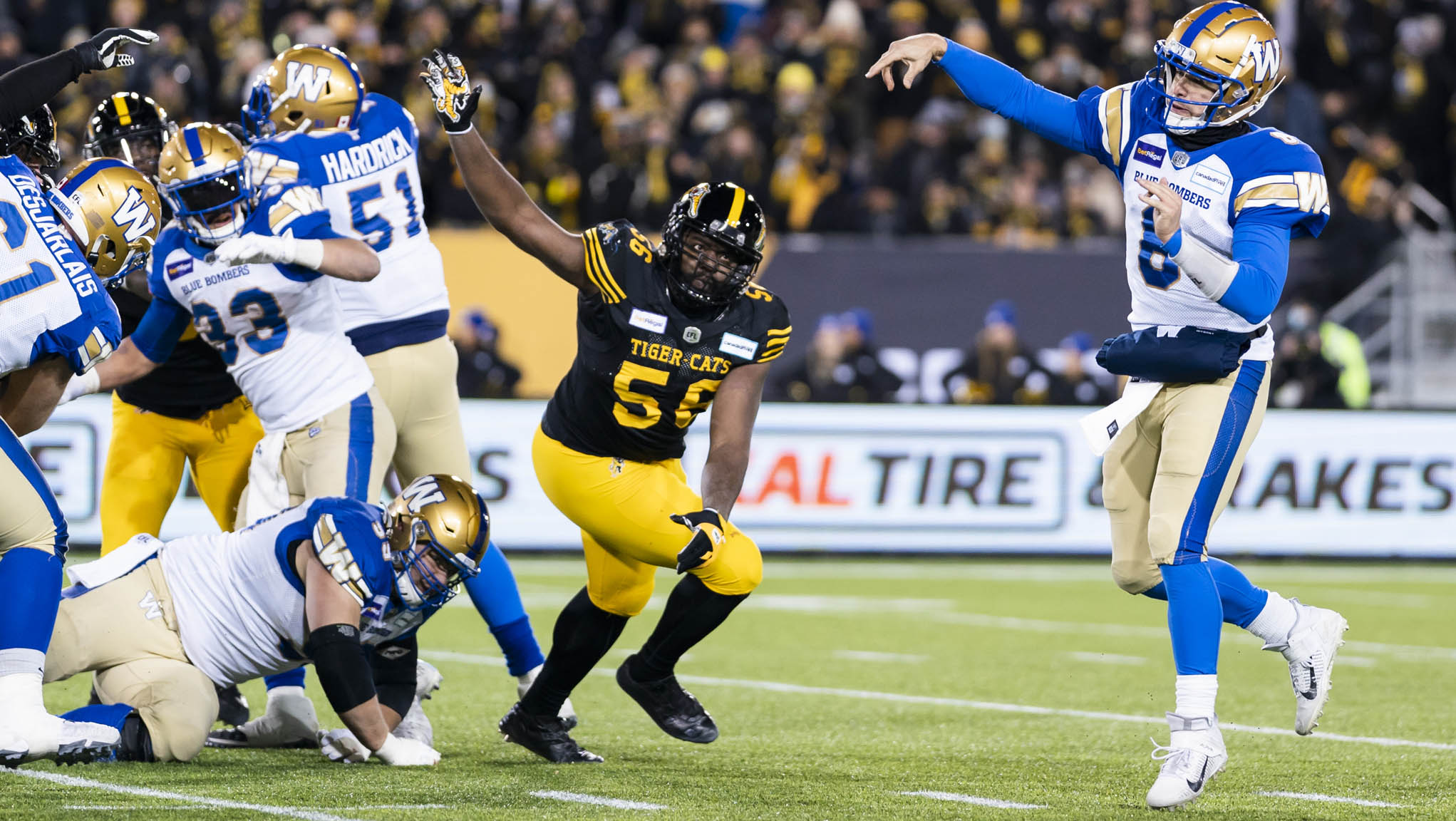 Ja’Gared Davis saved some of his biggest plays for the postseason, where he had five sacks and a forced fumble in the Ticats’ playoff run in 2021 (Kevin Sousa/CFL.ca)

That adaptability was on full display in the Eastern Final. Davis had three tackles and two sacks in that game, but his most impressive moment came from a situation where he initially looked to be exposed.

With the Toronto Argonauts deep in the red zone and looking to add to their early lead, Davis ended up playing defensive back against Argos’ RB D.J. Foster. Davis covered his ground and broke up a would-be touchdown. It was one of those game-changing plays that haunted the Argos and allowed the Ticats to hang in through a difficult first-half that saw them trail 12-0.

Davis’ productivity spiked in the playoffs. Through three games, he had five sacks and a forced fumble. He was a disruptive threat that teams had to scheme against to try to limit. His staying in Hamilton would make sense, given his fit with the team and the success he’s had, but there’s no reason to think that Davis won’t bring that success with him wherever he suits up.

That brings us to Davis’ exceptional good fortune through his CFL career. He’s played in five consecutive Grey Cup games, having spent the first three years of his career in Calgary before joining the Ticats in 2019.

While it can be taken in a lighthearted way – signing him doesn’t guarantee you a Grey Cup appearance – Davis brings a wealth of experience to a team. He’s seen the highs and lows of five championship games and at this point, there won’t be much that rattles him. As he looks at his future in the CFL, he should be in control of where he plays next.