Voting has already begun for the CFL All-Decade Team presented by LeoVegas, and there are sure to be some tough decisions ahead.

Everyone has a different ballot, and that’s what makes voting like this so exciting. You’ll be hard-pressed to find many fans or pundits that have aligned opinions across the board for players.

On the latest episode of The Waggle presented by Sport Clips, Davis Sanchez and Donnovan Bennett were joined by CFL.ca’s Matt Cauz to chat about the best of the decade and some of the toughest decisions that lie ahead with voting.

EPISODE OVERVIEW: Davis and Donnovan are joined by CFL.ca columnist Matt Cauz to dissect and debate a few of their picks for The All-Decade team presented by LeoVegas.

“The process was sort of like taking the statistics, but then you also take their peak years and who were the ones that made the biggest difference,” Cauz said. “As an example, Shawn Lemon was incredible and could make a defence — he had 70 sacks. Willie Jefferson only has 43, but you tell me who had the bigger impact game in and game out.

“So I tried to include all of that. It was part eye test, part stats, and part of it was just who scared you the most. Those are the sort of things I put together when selecting my team.”

The first round of voting for the All-Decade Team started on Tuesday, with receivers and defensive backs taking centre stage.

The two positions have some of the largest groups to choose from, and with the quality on the board, it makes the decisions that much tougher.

At receiver, you have the likes of S.J. Green, Weston Dressler, Fred Stamps, Chad Owens and Nik Lewis, who all managed to display stellar play throughout the decade. There’s also the current crop of CFL stars, such as Brandon Banks, Derel Walker, Bryan Burnham, Darvin Adams and Greg Ellingson, who all have their respective cases to be in consideration for a vote.

Likewise, the DB position has a great mix of past and present stars. Brandon Smith, who retired following the 2019 campaign, headlines the nominees. There are 41 names to choose from in total, the highest amount of any position.

“The first thing I thought of is who scared me the most,” Bennett said. “But when I went through the exercise, there were some guys that, in their height, scared me but I wouldn’t put on the team. TJ Heath at his height scared me. Byron Parker scared me in his height. I don’t think Ryan Phillips really scared me, but if I was filling out a team, I think I’d take Ryan Phillips because he was so consistent.

“Delvin Breaux scares me, but nobody throws at him, so he doesn’t have the stats that some of those other guys have. So as I went through the process, I strayed from that and I filled out a team that would compliment each other, but also who the best football players were. Because as good as Byron Parker or TJ Heath were in their primes, Delvin Breaux is better than those guys were.”

The guys jumped around from position to position, offering up their respective takes on which guys they considered and picked, but the running back position might have been the only one where the majority of the trio were in agreeance.

While there are some incredibly skilled individuals to choose from, including Canadian Jon Cornish, there’s one rusher hailing from the north that stands out from the pack.

“For me, it’s Andrew Harris. It’s an open and shut case,” Bennett said. “I don’t care, the stats, bar none, he’s been the most productive. In terms of versatility, he can block for you, he can run inside the tackles, he can break to the outside with speed and long speed and he can catch outside of the backfield.

“He’s one of the smartest players on the field, he’s incredibly durable and he got himself a Grey Cup this year. I think the resume is full. All due resepct to Brandon Whittaker, C.J. Gable, Tyrell Sutton and William Powell. There’s no real conversation for me. It’s Andrew Harris.”

Unsurprisingly, the quarterback position will be one of the most talked-about among the votes. On the one side, you have three of the all-time greats in Ricky Ray, Anthony Calvillo and Henry Burris who will each get strong consideration when their voting window opens.

But then, you also have the likes of Bo Levi Mitchell, Trevor Harris and Mike Reilly, to name a few. Each of those individuals are still building their respective cases to be considered amongst the best to ever play in the CFL.

“This one was harder because if you’re just going by pure production, you go with Mike Reilly,” Cauz said. “But he was also in a system that was designed to throw. I think Mitchell didn’t throw as much, but man, they never lost games. But then you go to QB wins as a stat and it just creates a lot of bad narratives.

“Finally, I throw Ricky Ray in because of what he was able to do while winning those Grey Cups with Toronto. I think it was harder to win a Grey Cup there than it would’ve been with Calgary because the infastructure with the Stamps is far above the other teams. 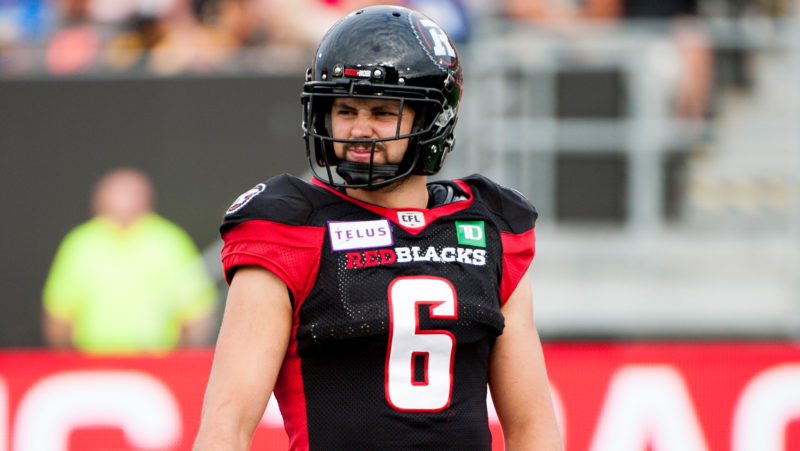 Ottawa REDBLACKS safety Antoine Pruneau is one of the Canadians up for a spot on the All-Decade Team presented by LeoVegas. (Adam Gagnon/CFL.ca)

But what about the ratio? Should one of the most important aspects of the CFL game be used when considering who to have on the All-Decade Team? Both Cauz and Sanchez picked the players they deemed to be the best, regardless of nationality. Bennett, on the other hand, added some Canadian flavour to his squad.

At receiver, Brad Sinopoli and Andy Fantuz are nominated. Safety is also a position of strength for the Canucks, as Taylor Loffler, Mike Edem, Antoine Pruneau and Marc-Olivier Brouillette are all available for picking.

“One name on the list that we need to give respect to is Antoine Pruneau,” Sanchez said. “He could very well be the safety for All-Decade Team. Ever since he’s come into the league, he’s been a baller and still is. So for me, he’s definitely in consideration for that spot.

There have already been some interesting conversations had when it comes to the All-Decade Team, and we’re only on the first set of voting. Get ready for a wild ride as we whittle down who the fans believe is most deserving of holding the title of best of the decade.