Their 13 regular season wins tied a then-club record. Seven members of the squad were named CFL All-Stars. In addition, Geroy Simon won the league’s Most Outstanding Player Award, Rob Murphy the Most Outstanding Lineman and Brent Johnson took both Most Outstanding Defensive Player and top Canadian honours. Yes, the 2006 Lions were a stacked group.

In the end, only one trophy would matter. And the man behind centre took it to heart as much as any of them. BCLions.com caught up with Dave Dickenson, the quarterback of that dominant 2006 Lions squad and current head coach of the Calgary Stampeders. He remembers how tense a mood it was going into that season.

“It’s kind of interesting because when I entered the league with Calgary in 1996, I came into a locker room that was talking about all of these missed opportunities, should have been winning more Grey Cups, and it kind of felt in BC like it was similar,” recalled Dickenson from his Calgary office last week.

“We had the best team in the regular season but it never materialized into a Grey Cup championship (prior to 2006).”

That’s the beauty of this league. If they remember your November for winning reasons, that’s all that matters. Entering that 2006 season- his fourth with the Lions-, Dickenson was closing in on 20,000 career passing yards, had thrown for 129 touchdowns and his resume also included CFL Most Outstanding Player and a league All-Star selection in 2000. But there was still something significant he needed on his resume.

After earning a Grey Cup ring as Jeff Garcia’s backup with Calgary in 1998, he lost his first two appearances in the big game as a starter. With the Stampeders a year later and then of course in 2004 when the Lions fell short against Toronto.

Overall, Dickenson’s quest for a Grey Cup win in 2006 kind of epitomized the Lions team as a whole. They would finish first in the West for a third consecutive season but knew it would all mean nothing without sipping from Lord Earl Grey’s mug. Along with talent and the right mix, teams that want to win it all must also have the will to overcome adversity.

Dickenson still claims the best team he ever played on was the 2005 Lions. No one needs to be reminded of what happened after an 11-0 start to that season. After the Western Final loss to Edmonton, he felt they needed to upgrade at a key position. That’s where Murphy came in. 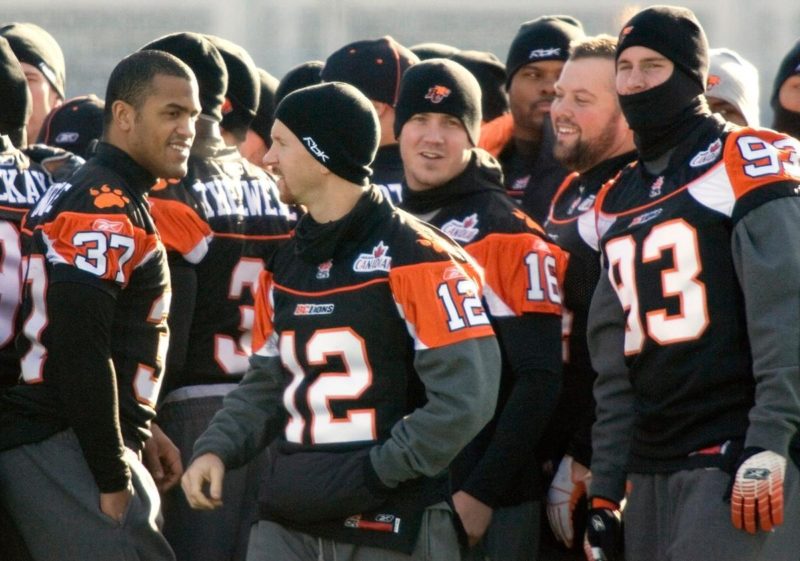 “He was coming off the edge and hitting me on every play it seemed. That was an area we needed to better and when Rob showed up in ’06 was when we started to dominate. That was the start of him being the best offensive lineman. As a quarterback, your left tackle is so important.”

Murphy was the final piece to an offensive line that already had Angus Reid, Kelly Bates, Jason Jimenez and Sherko Haji-Rasouli. That and a couple more key additions paid dividends as the squad once again earned home field advantage for the Division Final.

The departure of Casey Printers to the NFL’s Kansas City Chiefs also meant Dickenson was once again the undisputed starter and all of the quarterback controversy talk that hung over the organization like a dark cloud the previous two years had cleared up.

“I always thought chemistry is something most championship teams talk about,” said Dickenson.

“BUT HOW DO YOU MANUFACTURE IT, HOW DO YOU PUT IT TOGETHER? THAT TEAM WAS FOCUSED ON ONE GOAL. EVERYONE WAS ON THE SAME PAGE AND CREDIT TO WALLY AND THE STAFF FOR MAKING SURE OF THAT.”

As is the case today, the West was best. Whoever survived the division would be heavy favourites against Anthony Calvillo and the Montreal Alouettes. Dickenson and company rose to the occasion, thumping the arch-rival Saskatchewan Roughriders 45-18 in front of over 50,000 fans at BC Place. It was extra sweet when you consider the Lions had dropped three of four meetings to Saskatchewan in the regular season- 60 per cent of their losses for the year.

“2006 Western Final was as emotional as any win I was a part of,” he remembers.

“Saskatchewan was a hell of a team a bit of a thorn in my side. It seemed every time we played them I got hurt by someone coming off the edge. But that yeah, the West was a lot stronger and we felt if we could get out of the division we would have a great chance to win the Grey Cup. We took it too them early and didn’t have to do much in the second half.” 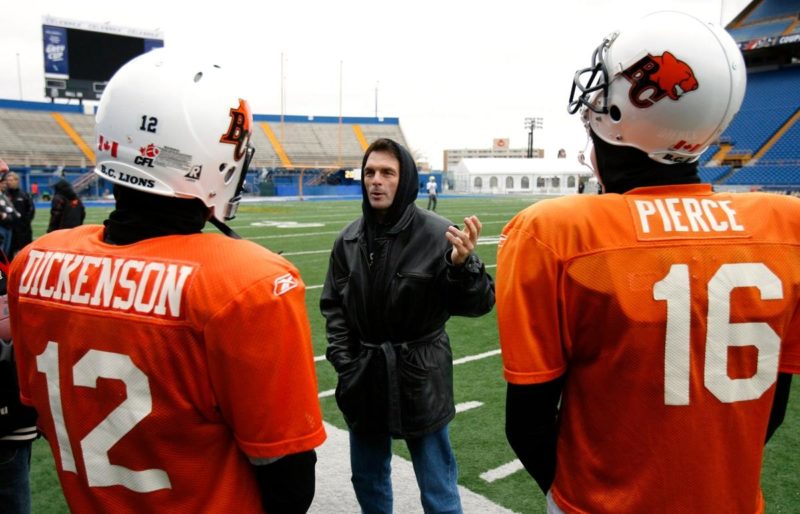 DICKENSON AND BUCK PIERCE GET A SPECIAL VISIT FROM DOUG FLUTIE DURING PRACTICE WEEK IN WINNIPEG FOR THE 94TH GREY CUP. PHOTO: FRANK GUNN/CP

It was so emotional that he now admits it was hard to hit the reset button and prepare to face a Montreal team that was also looking to exercise some November demons.

“I felt like as a team we did actually come down off that and I’m not sure we could have matched that emotion in the Grey Cup, which is crazy,” said the 2006 Grey Cup MVP.

“You think you would. But we had a bigger chip on our shoulder, more emotion against the Riders. In the Grey Cup, we were trying to stay on top of that but we also thought we were a better team than Montreal and we just had to go play our game and we’d win it.”

And perhaps that emotional drop off showed in the boxscore. Dickenson and company prevailed 25-14, but only managed one offensive touchdown. That was actually a pitch from Buck Pierce to Ian Smart that put them ahead 16-3 before halftime.

The way Dickenson recalled it, Montreal defensive coordinator Chris Jones was dropping a couple of guys into coverage and having one of them spy the quarterback. That’s what enabled him to be more of a runner on that day. His 53 rushing yards were his highest total that season. He also completed 18 of 29 passes for a modest 184 yards.

The rest of the scoring came on six field goals from Paul McCallum to tie a Grey Cup record. Dickenson also commended McCallum for overcoming some playoff demons of his own. Case in point the missed field goal from 18 yards out with Saskatchewan that would help preserve the 2004 Lions win in the Western Final.

Once Calvillo and the Alouettes got rolling, it was up to the defence to win it. Javier Glatt made the big play, leaping over the line to force a Robert Edwards fumble with Montreal looking to punch it in from the one and get within a touchdown with less than five minutes on the clock. Perfect complimentary football. Not always pretty, but most of the time effective.

“To be honest with you, there wasn’t much flash in it,” said Dickenson of the victory.

“It was more about getting out to an early lead and we just kind of methodically stayed in front by more than one possession. It didn’t feel like it was flashy or even fun to watch, it was more of those where we felt we were the better team. That showed on the field.” 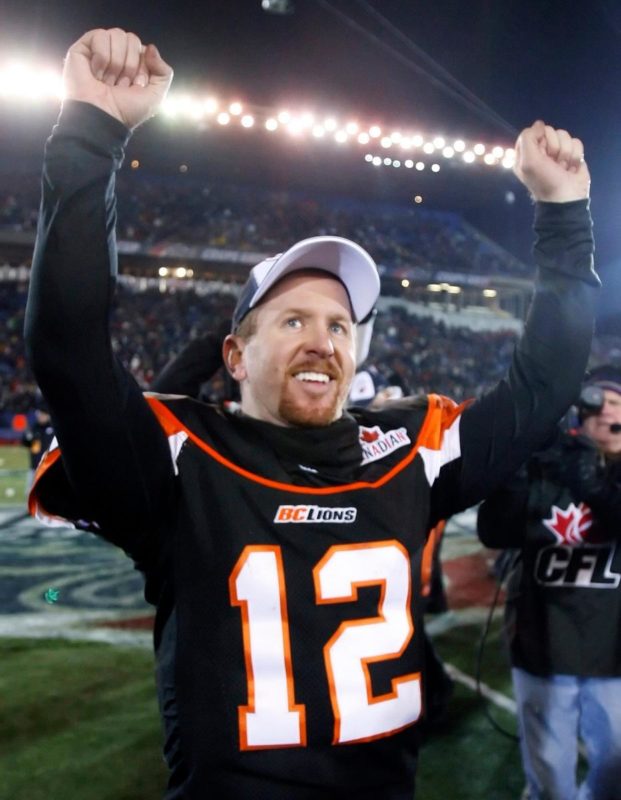 Once the final whistle sounded and the orange confetti was falling, Dickenson remembers the exact feeling. It wasn’t what you’d expect.

“It’s funny because a few years later I saw Peyton Manning win it all in Denver. I felt like he had the same look on his face. It was towards the back part of his career, he wanted to get a win with the team he didn’t start with. A lot of similarities there.”

But in the end, he was a Grey Cup champion starting quarterback. He admits finishing the job in 2006 enabled him to get the monkey off his back and silence some of those doubters.

“I talk to my players now a lot about legacy and I do want to be remembered a certain way. Unfortunately, if you don’t get a Grey Cup championship as a starter, you won’t be considered part of that upper echelon you want to be.”

And no matter what his stat line was, the only thing people remember is he was the guy hoisting the trophy at the end of the game.