As a football player, he’s always looking to get better and improve his game. That’s why he spends hours meticulously working on his technique, watching as much film as possible to learn and improve as he eyes the next step in his football career.

“The biggest part about my game is just my ability to grow,” Knight told CFL.ca at the CFL Combine presented by New Era last month. “I watch a lot of film, just watching technique, watching stance, and assignment and alignment stuff. I’m a huge film junky so I guess that’s the biggest part of my game, is that I’m always looking to improve. 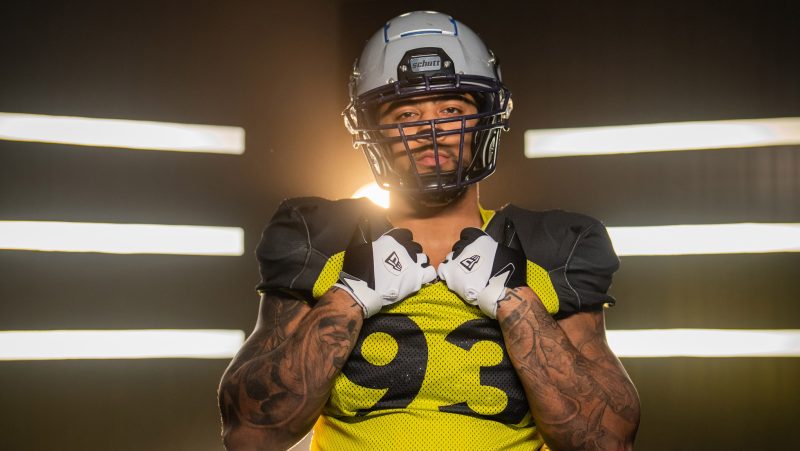 Deionte Knight is hoping to hear his name called on May 3 in the 2022 CFL Draft (Kevin Sousa/CFL.ca)

Knight attended the CFL Combine last month, participating in the drills and hoping to make an impression on the scouts and GMs in attendance. The six-foot-three, 278-pounder hit 10 reps on the bench and ran a 5.07 40-yard dash. He also jumped a 32 inch vertical and a 9′ 4 1/8″ broad jump while finishing the 3-cone drill in 7.50 seconds and the shuttle in 4.69.

The defensive lineman also strapped on his pads and competed in the one-on-one sessions, showing off his skills for the evaluators in attendance.

And for this 2022 CFL Draft hopeful, who was ranked No. 7 on the spring edition of the CFL’s Scouting Bureau Rankings, his commitment to the game extends both on and off the field.