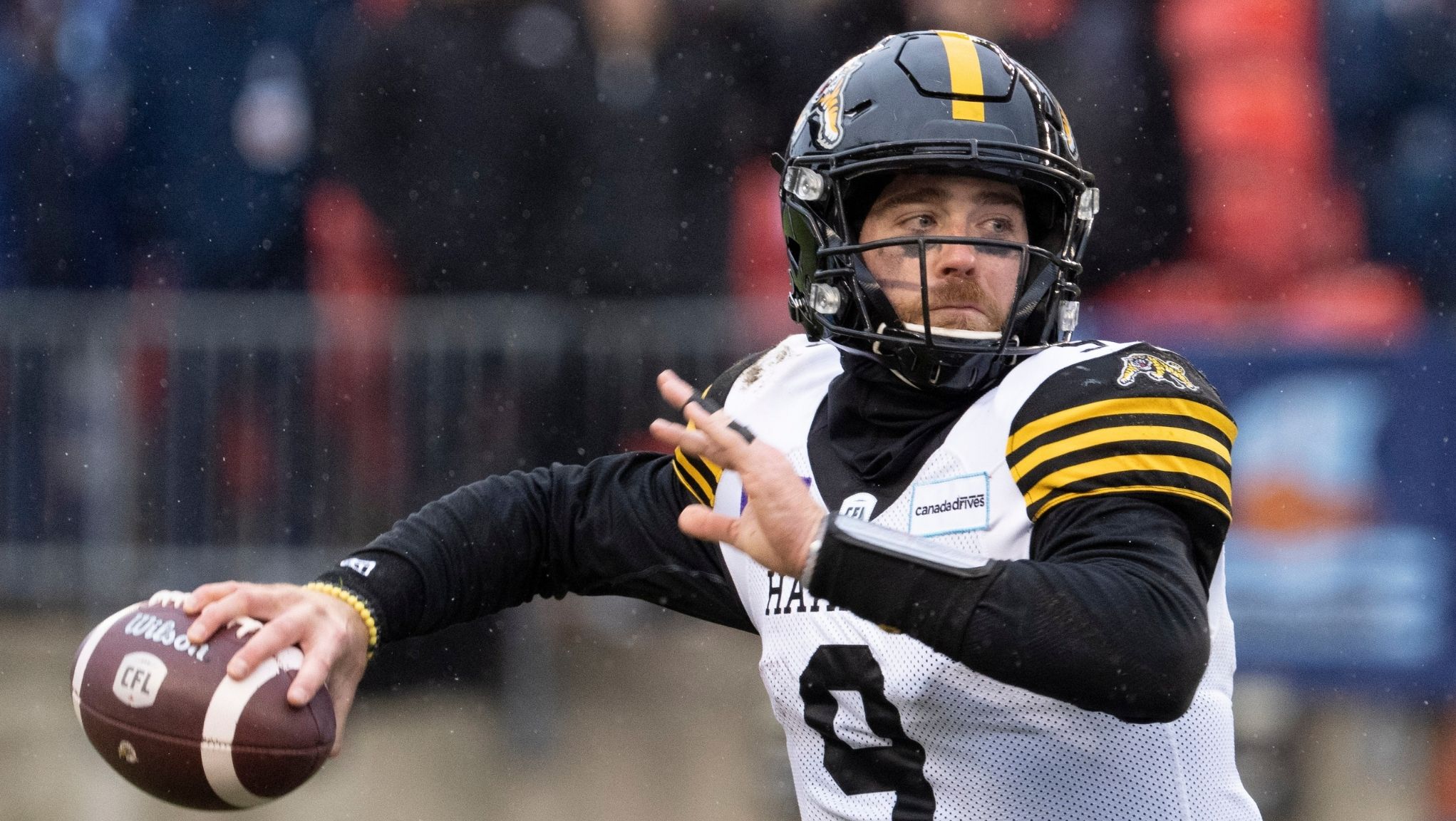 TORONTO —  Entering the game in the second half, Dane Evans led a come-from-behind charge to knock off the Toronto Argonauts in the Eastern Final to send the Hamilton Tiger-Cats to the 108th Grey Cup.

Trailing the Argos at the half, Orlondo Steinauer turned the offence over from Jeremiah Masoli to Dane Evans. Under centre, Evans and the Ticats’ offence found a new groove and seemed unstoppable after Papi White got them on the board with a punt-return touchdown.

Following the game, Evans was ecstatic about the win but was adamant that the team’s success is far more important than if he starts the next game.

“To me, it doesn’t matter,” said Evans post-game. “We just want to win this Grey Cup, we just want our names on the cup forever. That’s something you can show your kids, you can show your grandkids and to me, I don’t care if I have to serve water to everybody on the team; I want my name on the Grey Cup and I know that’s what the team wants too. Whatever they say, I’m going to be 100 per cent supportive, if I’m the guy of he’s (Masoli) the guy, I don’t care. I want to win.”

While Evans made his impact felt from the pocket, he also chipped in on special teams. Following White’s touchdown, Jeff Reinebold dove into his bag of tricks on the Ticats’ next offensive drive. On a third down, Evans converted a fake field goal which he followed up with a touchdown on the next play as he connected with Jaelon Acklin to tie the game at 12.

“When Jeff called it, I had no doubt. I mean, it could have been third-and-10 and we would have got it,” said Evans. “Everyone else is going to call them ‘trick plays’ and stuff, but to us when we had our O-line out there, it’s an offensive football play. I mean, we still have the ball so we may as well try and get the first. The following play when Acklin scored, we just took advantage of the busting; they didn’t even cover Acklin so that was a huge momentum changer.”

Holding down his phase of the game, Evans was certainly a large part of the Ticats’ win. With that, he recognized the effort the other phases the Ticats excelled in to come away with the win.

“We say every week, ‘They’re the best defence in the whole league,’” said Evans. “To see them go out there and hold them to field goals on big drives that we needed, to bow up in the second half, to make interceptions; just to see the ball like that, we feed off that as an offence. We know we have to hold up our end of the bargain and they played fantastic tonight and so did our special teams. It was a three-phase win.”

Finishing the game 16/16 for 249 yards and a touchdown, Evans was precise with his ball placement. Connecting on short, intermediate and deep routes, he appeared to have an abundance of confidence in the pocket but redirected all the credit that came along with a perfect completion percentage to his entire offence.

“The 16/16 thing, that’s just everybody doing their part,” said Evans. “I told them in the locker room, ‘I have the easiest job, y’all got to get open, I just have to throw it to you,’. The line has to block, everybody has to be at the right depths Don Jackson‘s got to make plays when he makes plays and it’s just a total team win.”

When asked about his thoughts of his quarterback’s performance, Simoni Lawrence gushed about Evans.

“That just shows what kind of man he is,” said Lawrence. “He’s going to do whatever he needs to do for the team and that kind of effort motivates the whole team and lets everybody know it’s time to go.”

“He’s (Evans) always prepared, he’s ready to go and it’s the same vice versa, Jeremiah is always prepared and ready to go,” said Steinauer. “When you come in off the bench, it does change the flow of the game a little bit and maybe how you call the game, but I just think the game was played a little different in the second half.”

With their win, the Ticats return back to Tim Hortons Field to clash with the Winnipeg Blue Bombers in the 108th Grey Cup in a rematch of the 2019 championship.