TORONTO — Prospects across the country are ready to strut their stuff in front of scouts, coaches and general managers in a process they have been training for months. With tests that showcase their agility, speed, power and quickness, the CFL Combine presented by New Era is one of the most critical moments in a player’s pro career before it has even began.

But what does each drill mean?  Why do the players do it?  What are the intricacies of each test? CFL.ca breaks them all down for you below: 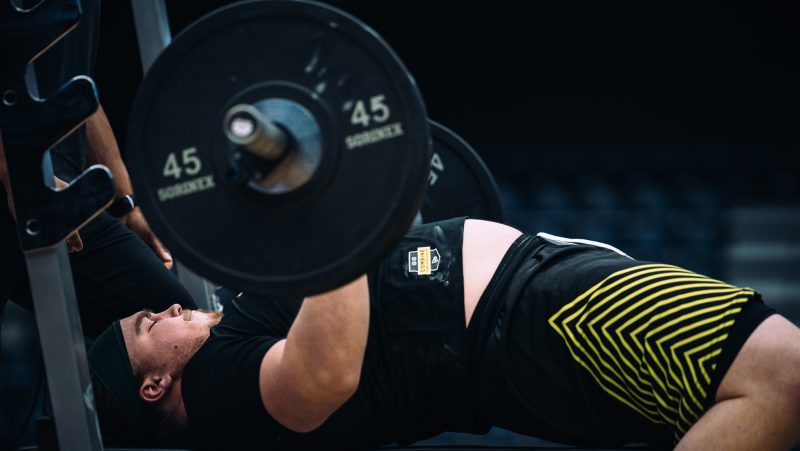 A test for: Upper Body Strength and balance
Attempts: One attempt at doing as many repetitions as possible using 225 lbs on the bar.
Equipment: Olympic style weights, bar and collars. Heavy duty bench and rack. Warm-up area
is provided.
Description: Test is done using Olympic style weights, bar and collars. A professional heavy
duty rack and spotter(s) is provided. (Anytime you are preparing for this test you should always
warm up and have a qualified spotter behind you, or two – one on either side in case you fail in
your last attempt. Also we suggest you use collars on the bar at all times).
1 – Take up your position with your back on the bench
2 – Feet flat on either side of the bench
3 – Once the bar is lifted from the rack, shoulders, mid-back and tail bone should remain in
contact with the bench at all times.
4 – Lower the bar to the chest and back to full arm extension
– Minimal bouncing of bar off chest is permitted
– Must have full extension of arms on each rep
– Resting with arms fully extended during test is permitted

A test for: Evaluates player’s change of direction, balance and ability to get up to speed quickly.
Equipment: 18 inch cones
Attempts: One (maximum two with one mulligan). Runner will be given one mulligan if he
falls, knocks over a cone, or improperly runs drill. He must run this attempt immediately after
mulligan is awarded.
Description: From the starting point, the player is in a 3 point stance (either hand down touching
the line). He will run to the first line 5 yards straight ahead and touch the line with his right hand
pivoting and coming back to the starting line touching the starting line with his right hand and
proceed back in the same direction. He will run around the 18” cone and head right 90 degrees
and to an 18” cone 5 yards away running around the cone, keeping the cone on his left hand side,
back to the 2nd cone, keeping the cone to his left hand side, and on through the finish line.

1 – Start in a 3 point stance with either hand down, hand must be behind the starting line
2 – Must be set prior to start at least one second.
3 – No rolling starts
4 – Time starts on runner’s first movement
5 – While rounding the 18” cones the player can never lean over and touch the ground with his
hands, he will be disqualified for that attempt.
6 – If, when rounding either cone, they are knocked over or displaced he will be disqualified for
that attempt.
7 – It is the responsibility of the player not to slip and adjust to the surface.
8 – Three cone director will inform runner, if he fails to complete drill on first attempt, that his
mulligan will be his final attempt. 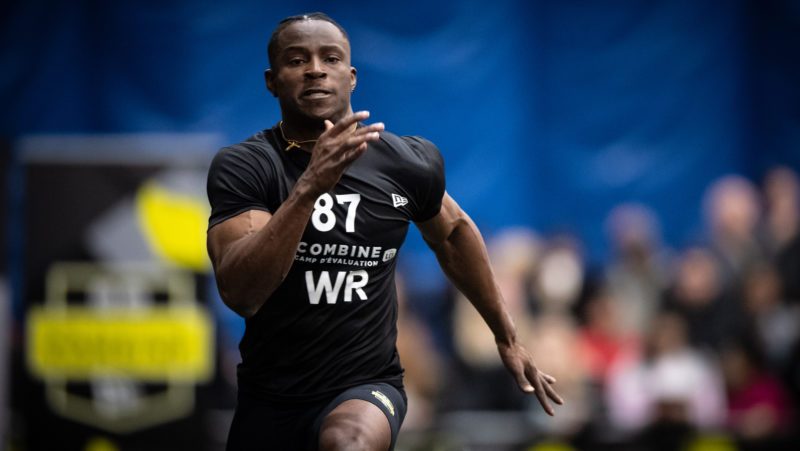 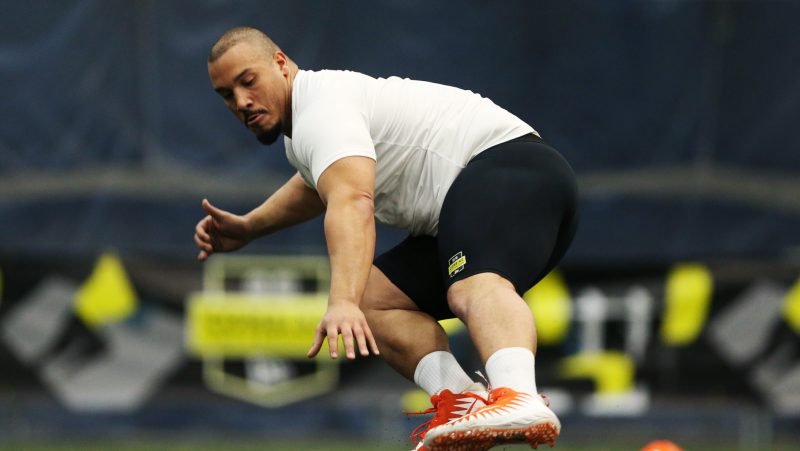 A test for: Lateral quickness, start/stop quickness and agility.
Attempts: Two (maximum three with one mulligan). Once going left and once going right.
Runner will be given one mulligan if he falls, does not touch or improperly touches a line, or
uses both hands to touch. He must run this attempt immediately after mulligan is awarded.
Description: Runner will start in the middle of the course starting in a 3 point stance with one
hand down (either hand). He will run 5 yards to his left touching the line with his left hand and
race 10 yards back across his starting point to another line touching the line with his right hand
and then race back to the starting point. Second time through, process is repeated in the opposite
direction.
1 – The runner will straddle the starting line, feet equal distance from the starting line
2 – Must start in a 3 point stance with either hand down on the middle of the line.
3 – Must be set prior to start at least one second.
4 – No rolling starts.
5 – Time starts on runner’s first movement.
6 – Only one can hand touch the ground at any given time.
7 – It is the responsibility of the player not to slip and adjust to the surface.
8 – Shuttle director will inform runner, if he has used his mulligan on a previous attempt, that
this is his final attempt.
Times: Taken to the nearest hundredth of a second. E.g. 4.05 sec. 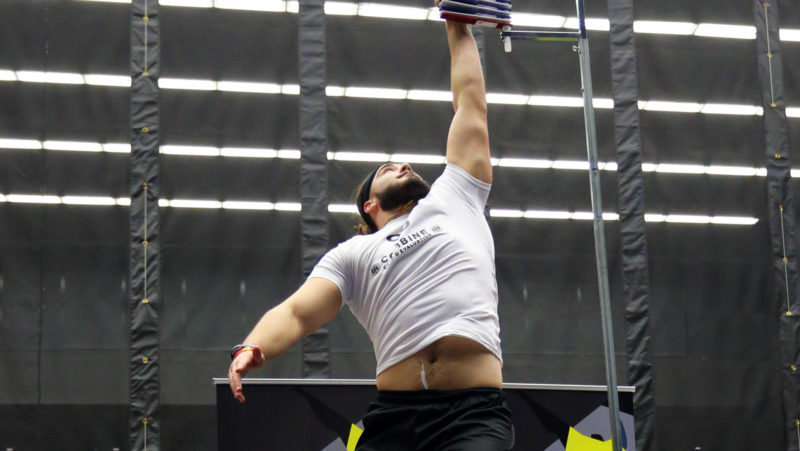 A test for: Explosiveness and vertical leaping ability
Equipment: Vertec or tape measure
Attempts: A player can jump as many times as he likes, as long as he improves each time he
jumps. Spotters will be in place to ensure this privilege is not abused.
Description: From a set position, players will perform a two footed jump and touch the highest
slat-marker possible. Each player prior to his jump will have his vertical reach tested. This will
be done using either your left or right hand (Players choice but if tested with right hand must
jump with right hand).
1 – VJ Director will measure 18 and/or 24 inches down from the bottom marker on the Vertec
and place a piece of tape at each mark.
2 – Player will stand w/ his right side (ankle, hip, shoulder; left side if left handed) against the
Vertec and extend his arm upward as far as possible.
3 – Director will extend the Vertec to the top of the players’ extended hand at the top edge of
tape and tighten in place. The bottom marker will represent 18 or 24 inches for that player.
4 – Player starts jump with both feet planted on the ground.
5 – Player may swing arms and dip knees.
6 – Players may not shuffle feet before take-off as this will result in a scratch and jump will not
count.
7 – Player attempts as many jumps as he would like (must improve each time), touching the
highest slat-marker on the Vertec from the floor.
8 – That mark represents the players’ vertical jump.
Measurements: Given in Inches and 1/4 of inches E.g. 34 and ¼ inches or 34 and ¾ inches.

A test for: Explosiveness, check for correlation to Vertical Jump, body control.
Equipment: Cones marking 3, 6, 9 and 12 feet. Tape measure. Measuring Stick
Attempts: Two
Description: A player stands behind a line and jumps forward as far as he can in a 3 foot lane
and the measurement will be from the starting line (same place his toes started from) to the back
of the foot (heal) that is closest to the starting line upon landing.
1 – When starting; Both feet are behind starting line, flat footed, no steps prior to jump
2 – Player can use arms for momentum and feet can be together or slightly apart
3 – Players feet must remain behind the starting line until he leaves on his jump
4 – Upon landing, as long as players foot closest to the starting line remains planted, the player
may fall forward.
– Disqualification occurs if the player skips his feet across the starting line on jump or when a
player falls back towards the starting line.
– Disqualification is at the discretion of the spotter.
Measurements: Taken to the nearest ¼ inch and given in Feet & Inches E.g. 9 ft and ¼ inch or 9
ft and ¾ inch.