The way Michael “Pinball” Clemons explains it, building a winning CFL team is a little like baking a cake.

You have ingredients like flour, eggs, butter, sugar, and milk. But the secret to success lays in knowing how much of each to use and the proper baking temperature.

“It’s our job to make sure the cake rises,” said the Toronto Argonauts’ general manager. “The ingredients are not pre-determined. We try to allow them to work that out on the field.

“Some people who you think are going to make the cake, make it flat. They maybe didn’t have the same expectations to make it rise.” 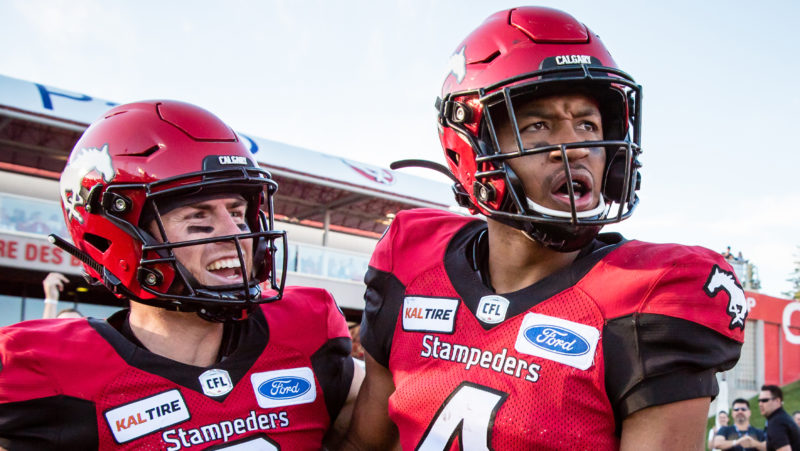 Quarterback Nick Arbuckle and receiver Eric Rogers were among the additions in what was a busy off-season for the Toronto Argonauts. (Stampeders.com)

They’ve also stocked up on former high NFL picks like defensive linemen Shane Ray (selected 23rd overall by Denver in 2015), Eli Harold (79th overall by San Francisco in 2015), and Kony Ealy (60th overall by Carolina in 2014), as well as receivers Kendall Wright  (20th overall by Tennessee in 2012) and Martavis Bryant (118th overall by Pittsburgh in 2014).

Clemons said the Argos weren’t swayed by the players’ NFL pedigrees. They were signed because they fill a need.

“We haven’t built the team saying these draft choices are going to win us the Grey Cup,” he said. “We built the team putting the building blocks in place. They happen to be first-rounders, but they are players that we think can augment our team, in one way or the other.”

No one comes to camp assured of a job.

“We blend some young guys who may prove to be better than those older NFL guys and then we let them compete,” said Clemons. “That’s what training camp is for.

“In football, because of the variety, the number of players, the number of injuries, guys are more likely to get an opportunity, guys who you don’t know about. That makes it interesting and it makes for some great stories.”

Clemons has some history dealing with first-round NFL picks. In 2004, he was head coach of a Toronto team that featured players like wide receiver Andre Rison, a first-round pick of the Indianapolis Colts in 1989, along with running back John Avery — picked 29thoverall by Miami in 1998 — and defensive back Kenny Wheaton, a third-round pick by Dallas in 1997.

The Argos finished second in the East with a 10-7-1 record that year. Toronto then beat Hamilton and Montreal in the playoffs before upsetting the BC Lions to win the Grey Cup.