TORONTO — The grind of training camp is winding down, but the news cycle is just getting going.

CFL.ca will take you through roster finalization on Friday, but for now get caught up on where teams stand as they end their training camps and get ready for Week 1 of the 2021 season. 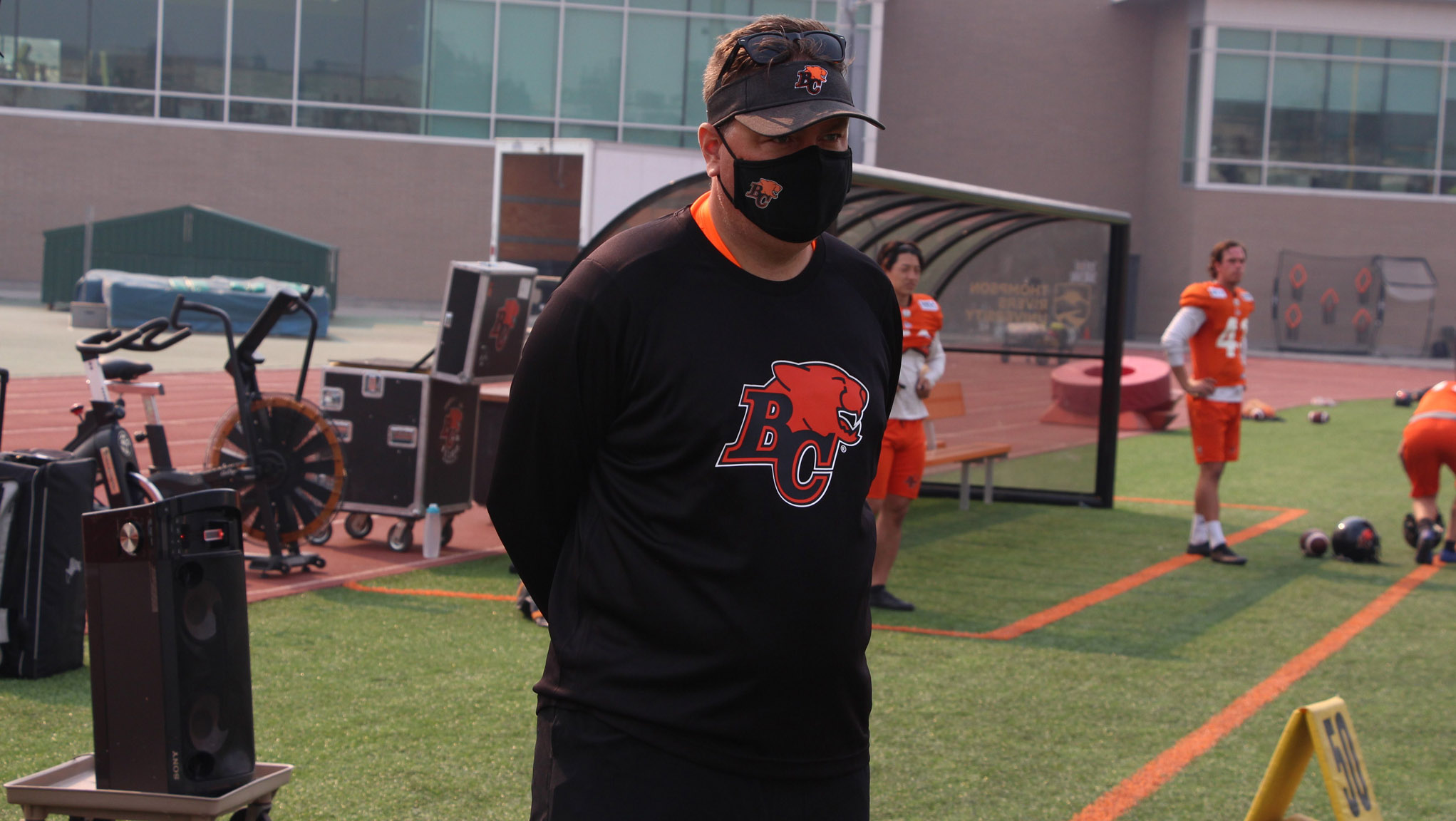 – Hampered by poor air quality from forest fires, the Lions wrapped up their camp in Kamloops on Wednesday. They’ll head back to Surrey and get ready for their Week 1 date in Saskatchewan with the Roughriders (CFL.ca).

– A good end-of-camp Q&A with Lions’ co-GM Neil McEvoy, who goes into getting some d-line answers, the emergence of Jordan Williams at LB, Nathan Rourke playing behind Michael Reilly and more (BCLions.com).

– That move was facilitated by the performance of a couple of new faces in camp: Nyles Morgan and Keishawn Bierria, who could factor in heavily to DC Noel Thorpe’s plans at linebacker this year (Gerry Moddejonge, Postmedia).

– Speaking of Thorpe, the Elks have extended their defensive guru through next season (CFL.ca). 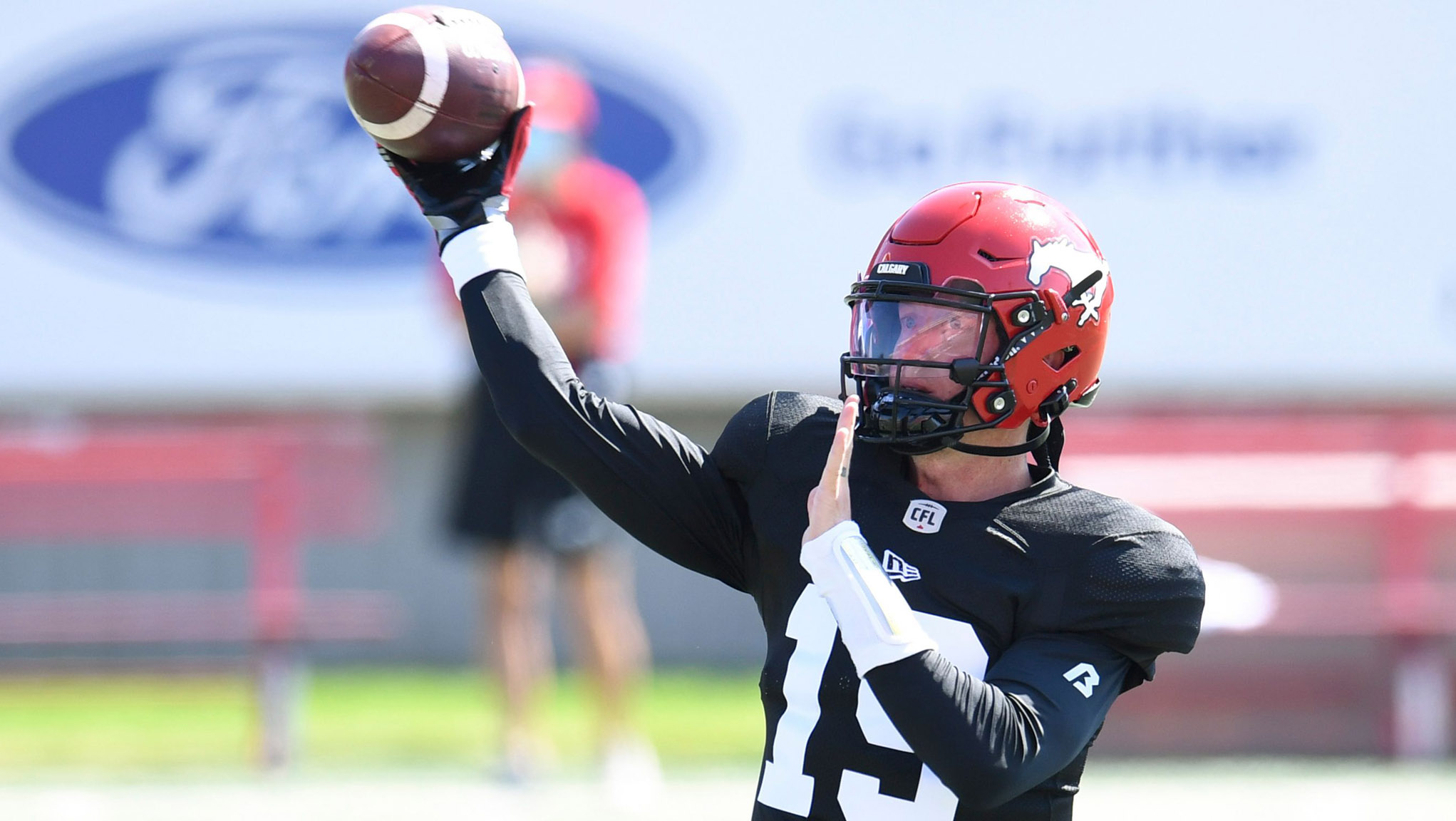 Bo Levi Mitchell has been held back in the final week of training camp, with coach Dave Dickenson thinking his QB will be ready for Week 1 (Photo: Stampeders.com)

– Bo Levi Mitchell“>Bo Levi Mitchell is dealing with a groin issue, but the team thinks their star QB will be ready for their Week 1 battle with the Argos (Farhan Lalji, TSN.ca).

– Calvin McCarty is a Calgary Stampeder. Keep saying it and we think it’ll get easier to comprehend (Chris O’Leary, CFL.ca).

– The reason McCarty is out of retirement? Stamps’ FB Charlie Power is out with a torn Achilles. The team is still assessing the severity of the injury (Danny Austin, Postmedia).

– Ucambre Williams is back on the field and will be sliding over from centre to left tackle this season (Danny Austin, Postmedia). 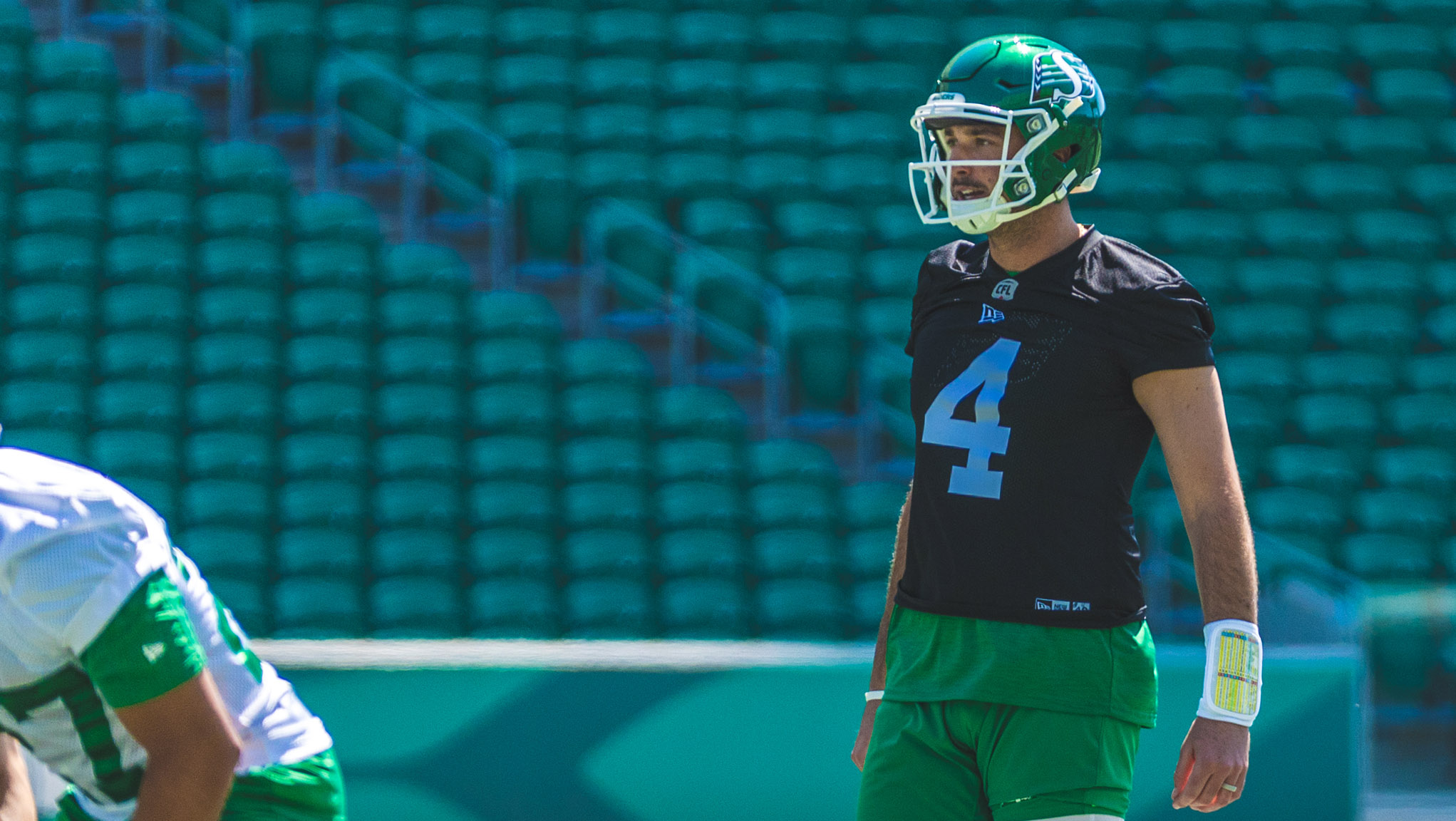 Roughriders head coach Craig Dickenson will have some tough choices to make for his backup QB, after working with a string of talented players in camp, including Paxton Lynch (Photo: Riderville.com)

– We know Cody Fajardo gets the start at QB. Who’s behind him? The Riders have some big decisions to make at backup (Rob Vanstone, Regina Leader-Post).

– The injuries continue to pile up in Saskatchewan. Tim Williams tore his Achilles and Sterling Shippy broke his foot in the Riders’ Green and White game (CFL.ca).

– Receiver Jordan Williams-Lambert isn’t having much luck with injuries, either. After returning from a hand injury, he tweaked something stretching this week (Murray McCormick, Regina Leader-Post). 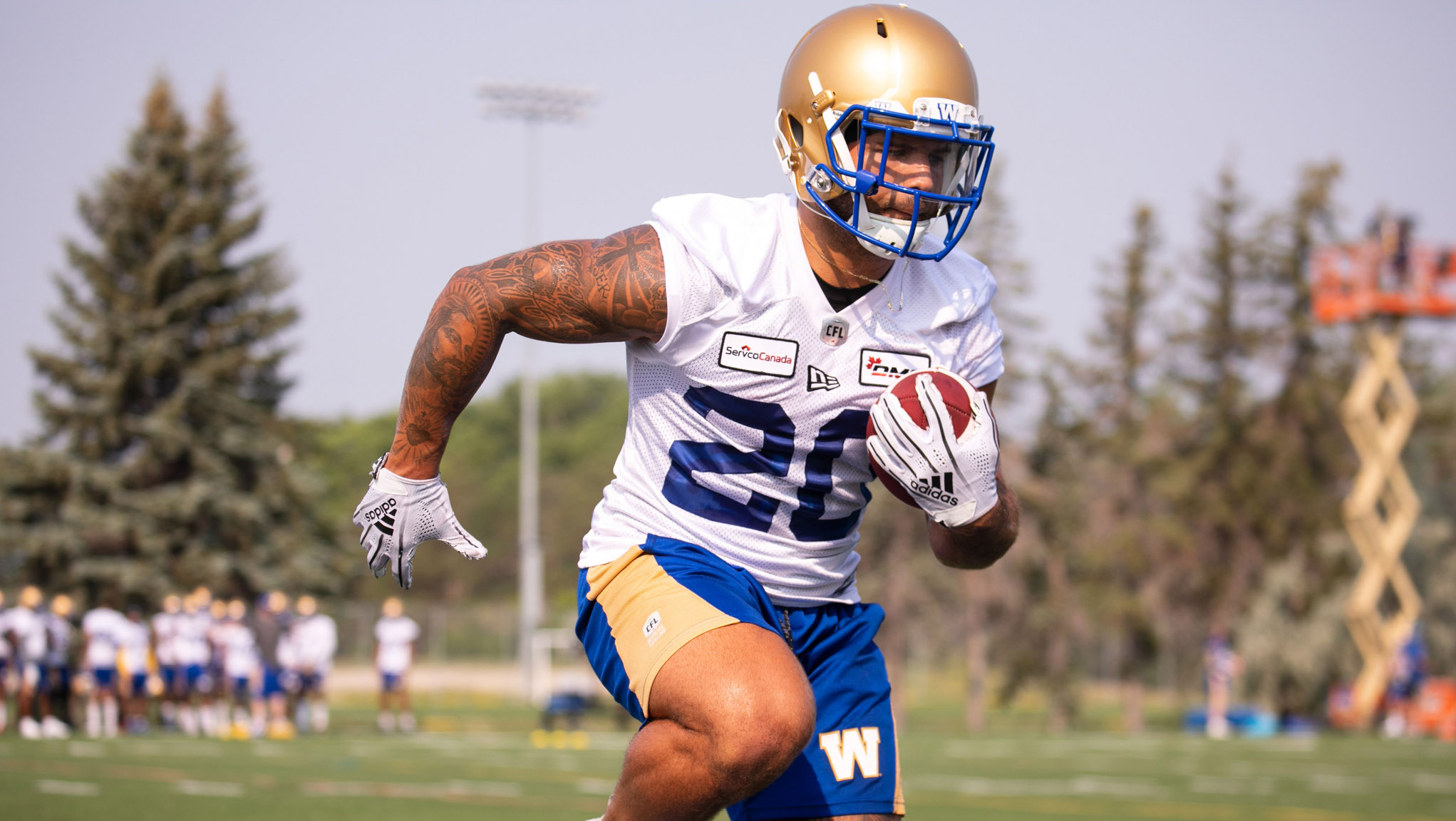 If Andrew Harris were unavailable for Week 1, Brady Oliveira could replace him in the lineup. The rookie carried the bulk of reps in training camp in Harris’ absence (Photo: BlueBombers.com)

– While Calgary is optimistic about Bo Levi Mitchell for Week 1, there’s a little more concern in Winnipeg for star running back Andrew Harris, who went from being rested to dealing with an injury in training camp (Farhan Lalji, TSN.ca).

– If Harris is unavailable for Week 1, it looks like Canadian Brady Oliveira would slide in. He’s taken the bulk of the workload in camp, with last year’s backup Johnny Augustine just making his way back into practice this week (Ed Tait, BlueBombers.com).

– Rookie receiver Blake Jackson is gone for the year with a torn Achilles (Ed Tait, Bluebombers.com).

– The Bombers will raise their 2019 Grey Cup banner on opening night against the Ticats on Aug. 5 (Ed Tait, Bluebombers.com). 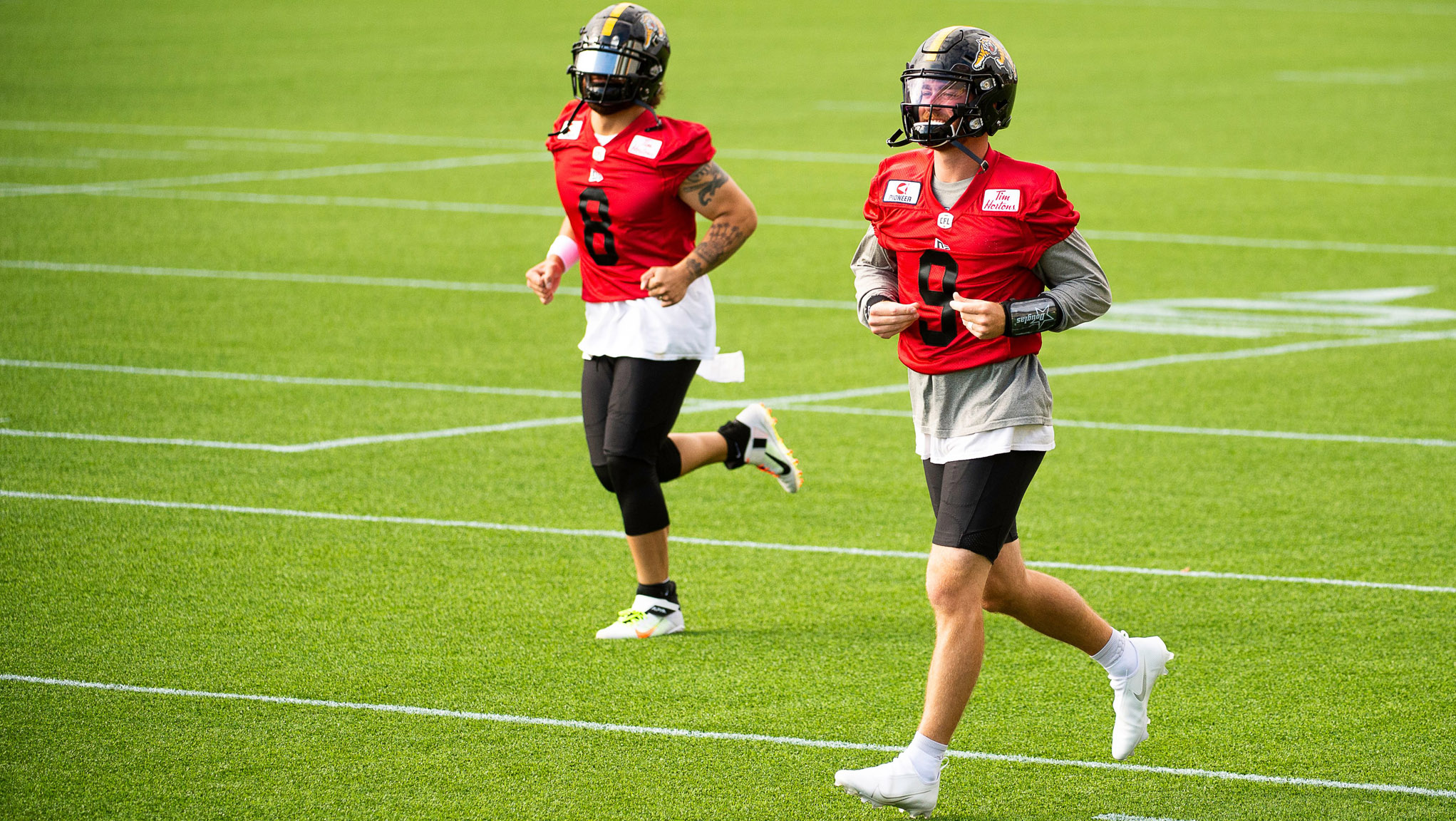 The Ticats have wrapped up their training camp and know who their starting QB is but they’re not ready to share the info yet (Photo: Ticats.ca)

– The Ticats wrapped up their training camp on Wednesday, with coach Orlondo Steinauer saying this would be the last time the training camp group would be together (Louie Butko, Ticats.ca).

– Steinauer said that he knows who his starting quarterback will be on Week 1, but will take Thursday and Friday to finalize plans with offensive coordinator Tommy Condell (Steve Milton, Hamilton Spectator).

– The Ticats released 11 players this week and signed kicker Jimmy Camacho, who crossed paths with Steinauer when they were at Fresno State (CFL.ca). 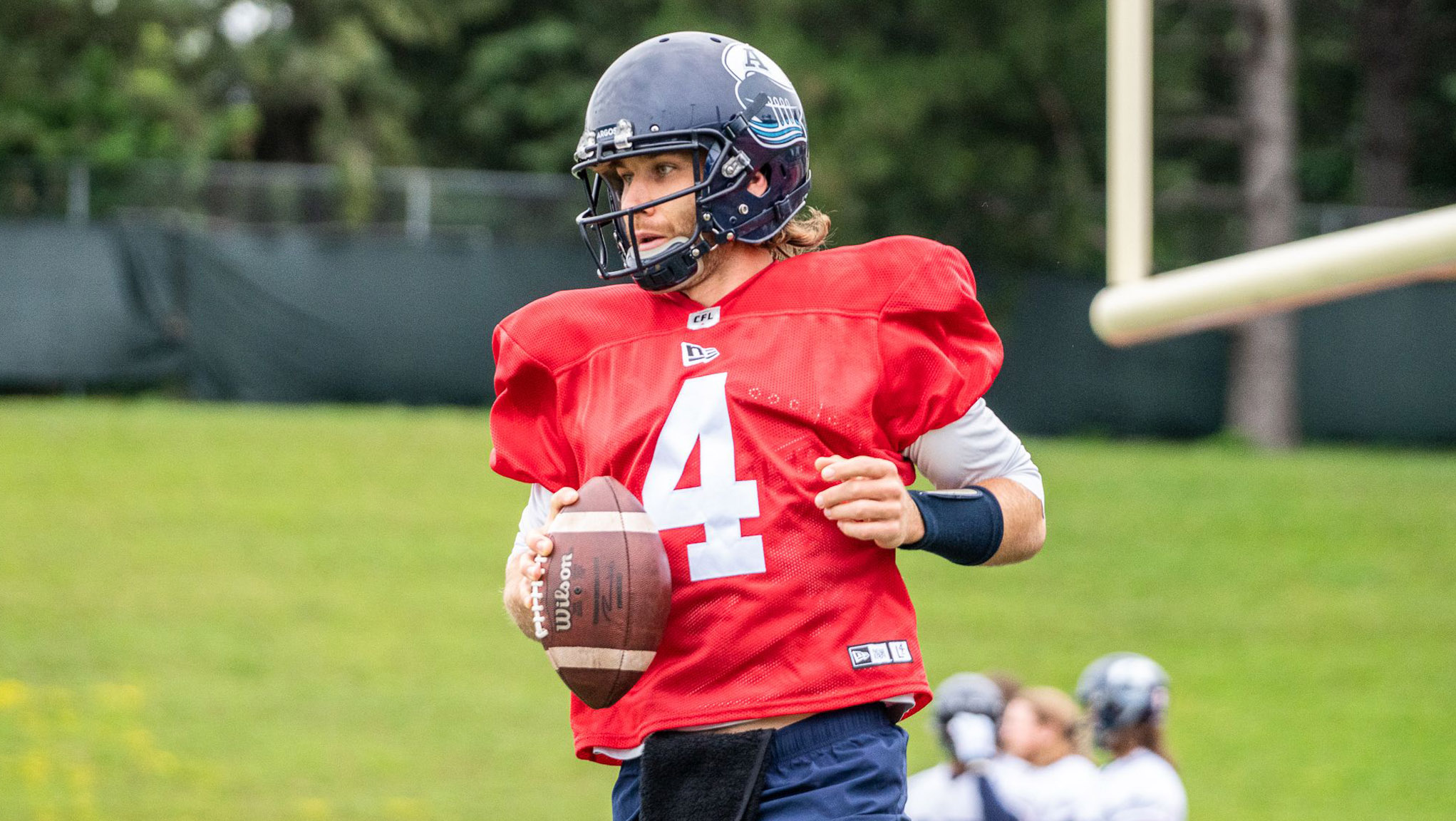 – Meanwhile, there’s thought that the Argos could have a QB battle that runs through this season (Davis Sanchez, friend of CFL.ca, TSN.ca).

The Argos released six players on Wednesday, including receiver Terrell Sinkfield and d-lineman Ronald Ollie. Ollie, who featured prominently in the Netflix series Last Chance U, later tweeted that his torn hip flexor was the reason for his release (CFL.ca). 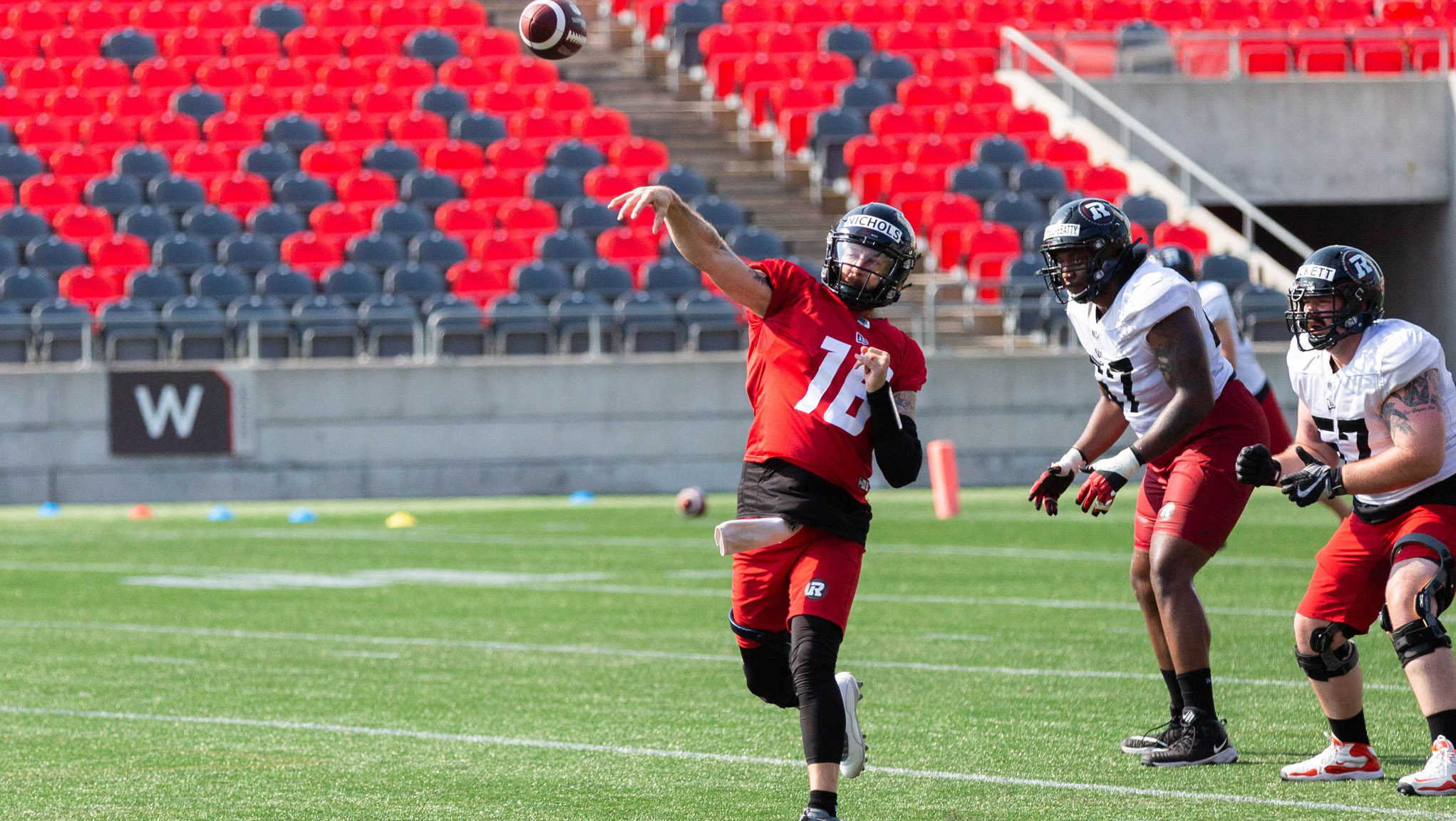 Matt Nichols will see his workload increase in the coming week, as the REDBLACKS prep for their season opener against Edmonton on Aug. 7 (John Halpenny/CFL.ca)

After more than a week off, REDBLACKS QB Matt Nichols joined his team on the field on Wednesday. He told reporters that the break was due to fatigue and a sore arm in his first training camp in two years. Nichols said he’d be available for the REDBLACKS’ Week 1 date with the Edmonton Elks (Tim Baines, Postmedia).

– With Ontario locked down the last year, REDBLACKS o-lineman Jakub Szott made an improvised gym that included pushing his father’s truck around a parking lot (Tim Baines, Postmedia). 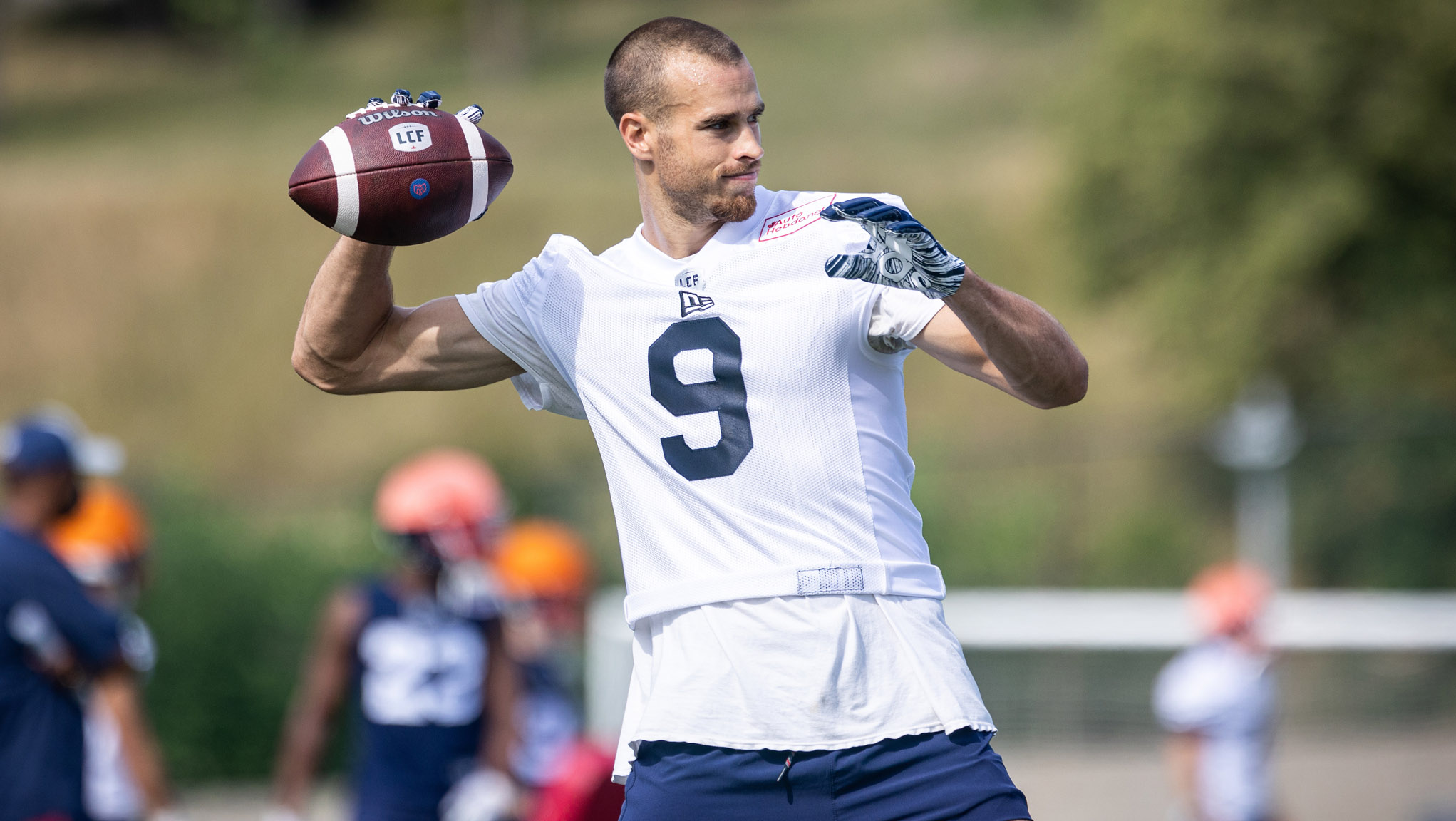 Taking a break from possibly punting his way onto the Alouettes’ roster, Joe Zema showed he might be capable of the odd trick play here and there too (Dominick Gravel/MontrealAlouettes.com)

– The Alouettes got the week rolling with a significant move when they included receiver Naaman Roosevelt as one of their 14 cuts (CFL.ca).

– One of those released players, d-lineman Michael Wakefield, was back on the Als active roster a day later (Herb Zurkowsky, Postmedia).

– The Alouettes will be able to welcome 15,000 fans to Molson Stadium for their home opener on Aug. 27 and they’re pretty psyched about it (Montrealalouettes.com).