One of the handy things about a football field is that it won’t melt in the sun. It’s true! You could have a CFL game with gorgeous Lake Tahoe as the backdrop and unlike in hockey you would not have to delay the game eight hours.

It is hilarious that the NHL seemingly did not take into account the impact of the giant glowing orb known as the sun, but at the same time I loved what the NHL was trying to do with their outdoor game series. The NHL is often rightfully accused of being far too conservative, so I loved them pushing the boundaries by trying new locations to present their game in such a different and vibrant way.

Naturally this leads to the obvious question: What Canadian settings would you like to see a game played from? The good news is football has more flexibility than hockey and because Randy Ambrosie won’t take any of my ideas seriously I can throw out some real doozies. 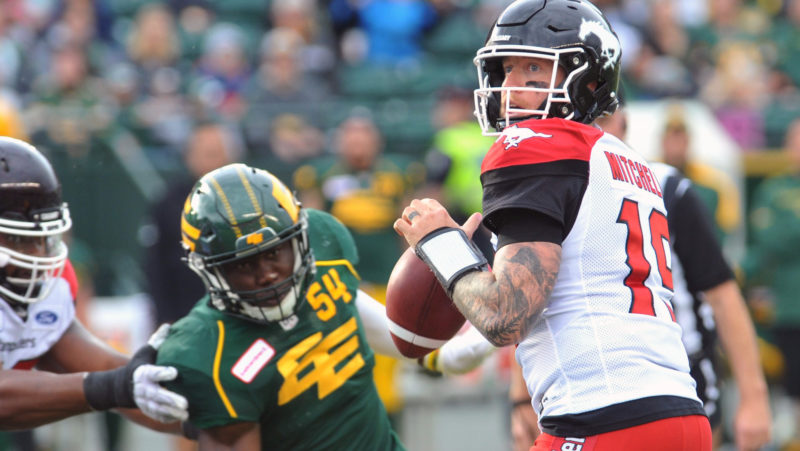 A Battle of Alberta game in Banff would be a must if we were looking at neutral site CFL games, Matt Cauz argues (Walter Tychnowicz/CFL.ca)

Banff National Park, Alberta
Canada’s answer to Lake Tahoe is gorgeous Lake Louise. Just imagine a Calgary vs. Edmonton clash at Alberta’s most famous tourist location? We’ll get some drones from the top of Sulphur Mountain for some pre-game scenery, shots of a deep Bo Levi Mitchell touchdown pass with the Rockies in the background and of course everyone can stay at Chateau Lake Louise.

Churchill, Manitoba
The polar bear capital of the world is where we’ll find the Banjo Bowl. The late fall is the best time to see Polar Bears migrate so we should be able to coincide this clash of football humanity with one of the most fearsome animals alive. Not sure what would be more intimidating: polar bears getting close to the spectators or Micah Johnson and Willie Jefferson getting close to the quarterbacks. As an added bonus there is a chance we’d get a beluga whale appearance. Can we have Chris Streveler in his fur coat for the opening coin toss?

Niagara Falls, Ontario
The Toronto Argonauts taking on the Hamilton Tiger-Cats at the honeymoon capital of Canada! We get players in the Maid of the Mist, Brandon Banks walking on the tight rope (if any player can do it it’s him) and maybe a wax replica of Charleston Hughes at one of the wax museums on Clifton Hill. The great thing is TSN can keep cutting to shots of the Falls and constantly remind the viewers that the Canadian side has the larger waterfall.

Added Bonus: Now more than ever we should all be buying and drinking local. Check out some of the local Niagara wineries. For the red wine drinker, I can assure you we do plenty of full-bodied reds.

The Sandbanks Provincial Park, Ontario
Did I throw this in because we’re in another well-known Ontario wine making region? Maybe. Trust me, you’ll love their pinot noir. The Sandbanks would be a perfect spot for a summer game as you’ll find no better beaches in all of Ontario. I want the shots of boaters and football fans on kayaks taking in the game. Also this location is perfect for a Toronto/Ottawa matchup as it lies nearly in between both these cities. So let’s see a little Nick Arbuckle vs. Matt Nichols awkward grudge match and then celebrate the game with a glass of County Chardonnay. All right, that’s the last of my wine talk.

Inner Harbour, Victoria, BC
Is there room for a regulation size football field? We have to find a way for Mike Reilly and his hipster beard to make his way from some artisanal coffee shop and onto Inner Harbour field with the well-lit oceanside promenade in the background. I think we can all agree that football needs more promenades. I was going to go with somewhere near Okanagan Lake in the Okanagan Valley but that would just devolve into me waxing poetic about the delicious merlots and syrahs that can be found all over the valley. I’ve spent 30 minutes on Google Images and the downtown core looks fantastic. Also, this area is just so walkable, which is an added bonus for any and all tailgating.

Great Slave Lake, NWT
You thought Churchill was going to be the coldest location? We’re heading to the Northwest Territories, where the backdrop is the 11th largest lake in the world and North America’s deepest lake. Not only is the view stunning but if the game is played at night we could catch the Northern Lights. I want a last-second field goal splitting the uprights with the aurora borealis lighting up the winning points.

Twillingate, Newfoundland
You want a super cool, truly Canadian experience? How about catching some three down football in this small Newfoundland and Labrador town with icebergs in the background! Think of all the lame Titanic references that can be made if one team is getting blown out. I imagine this game being played by the BC Lions, the franchise that is the furthest west in the CFL, taking on the Montreal Alouettes, the team closest to the Atlantic. Here’s hoping the “Turf War in Twillingate” will help accelerate Eastern expansion and we can finally have our 10th CFL town. We need the battle of the Pacific versus the Atlantic.

Quebec City
Have you ever seen the view from the Fairmont Le Château Frontenac? The hotel itself is stunning as is the view of the St. Lawrence River. Shots of CFL fans strolling through Old Quebec, going in shops in Quartier Petit-Champlain are a perfect transition from commercial breaks. Considering the football factory known as Laval Rouge et Or has produced so many CFL players Quebec City makes perfect sense.

The Athabasca Sand Dunes, Saskatchewan
You really thought I would have left out the great province of Saskatchewan? I left the best for last. Now, this one will be tricky, as the league will need a fleet of float planes as there is no road access. You’re not going to get to stay at some swanky famous hotel, but you could set up a makeshift football field with views of the lake and giant sand dunes that are nearly 100-feet high. The marketing for this one would be tremendous.

(In a menacing baritone voice): In a land where no one dares to tread alone, in the middle of the desert comes two football teams both looking to quench their thirst for victory.

All right, maybe I shouldn’t be in charge of marketing. I’ll stick to location scouting.