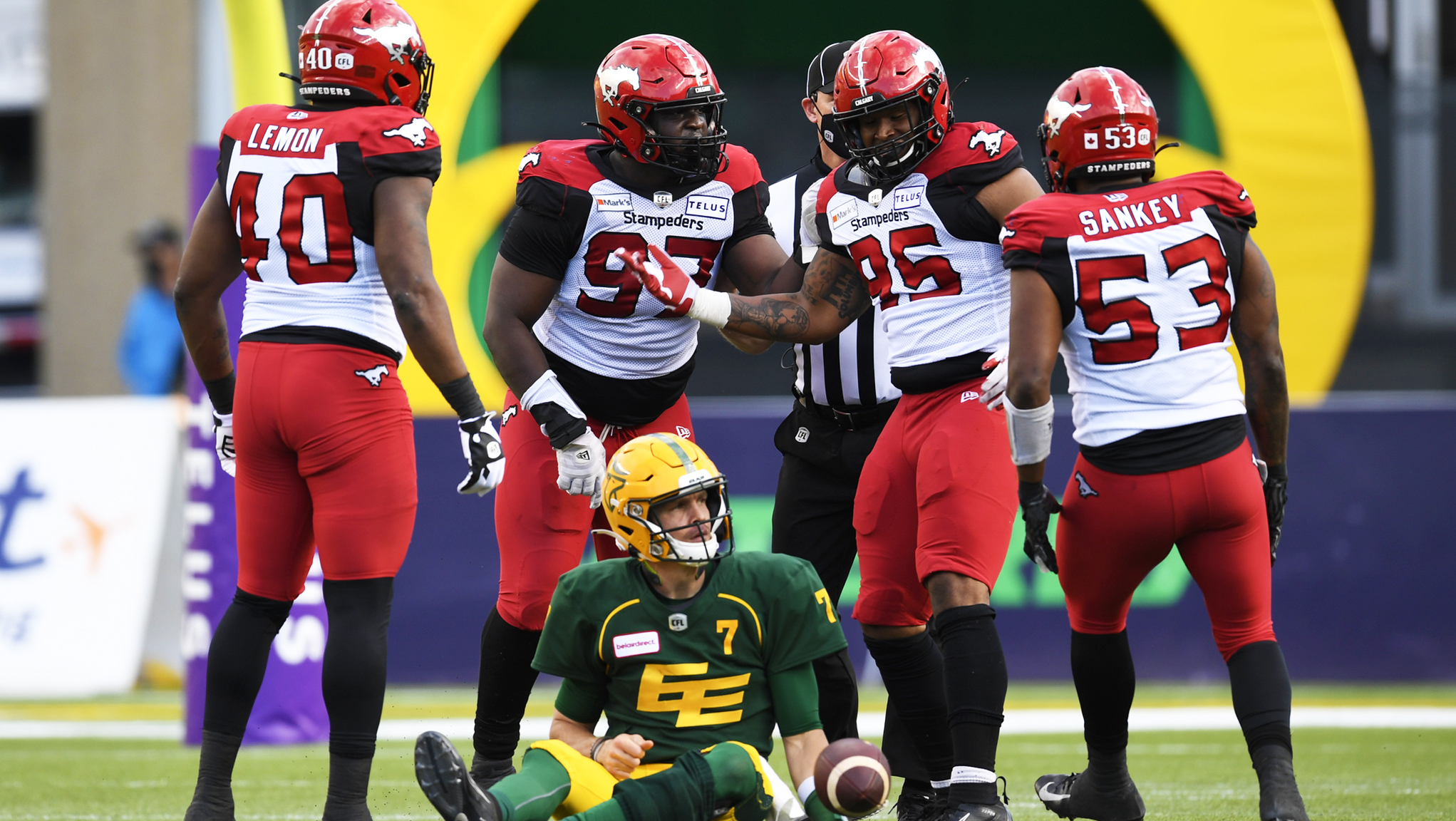 So, there I was on Saturday afternoon enjoying all that was going on in the CFL world.

I was the only CFL.ca writer to select Toronto to defeat Hamilton, my Bombers over the Roughriders pick had paid off and we were off to Commonwealth Stadium for the Stampeders and Elks rematch. My last column was nothing but effusive praise for Trevor Harris, his offensive line and how dominating the passing attack was in their 32-20 Mark’s Labour Day Weekend victory. I think I even slipped in the line that game was the best I had ever seen Harris play.

I was feeling pretty good that we could see a reasonably close facsimile, especially as Calgary was dead last in sacks generated coming into this contest. Oh boy did I jinx the entire Edmonton offensive unit as Calgary put up seven sacks and held Harris to 221 yards with zero touchdowns and turned the ball over twice. I almost feel like I should apologize for whatever part I played in the Elks losing 32-16.

So, what happened on Saturday night?

The most impressive aspect of the seven Harris takedowns was the fact that they all came with just a four-man rush. Calgary won the game because players like Stefen Banks, Shawn Lemon and Mike Rose were able to physically dominate the Elks offensive line, winning at the point of attack more times than not.

Dave Dickenson and defensive coordinator Brent Monson did not have to bring in extra defenders or dial up complex blitz packages to get to the heart of the Edmonton passing game. It is a cliché, but it is also an absolute truth, that the number one trait for all elite defences is the ability of their respective defensive lines to independently harass and hurry a quarterback without the assistance of anyone else. Four linemen making life difficult means there are eight other players who can focus strictly on coverage responsibilities.

I want to focus quickly on those other members of the Calgary defence. Yes, the headline needs to be all about rookie defensive linemen Stefen Banks collecting three sacks and Shawn Lemon also with a hat trick of quarterback takedowns. But when you go back and watch the seven sacks, you will see that Harris had at least three seconds to get rid of the ball before he was introduced to the turf on many of the instances I am about to examine.

On many of the sacks, Harris has time to go through his first read and move on to other options. It was fair to be critical of the Calgary secondary for numerous busted coverages and missed assignments on Labour Day and it is fair to say that the same secondary played a big part in the defensive line’s success by taking away Harris’ first read and forcing him to hold on to the ball. What a difference a week makes when on Labour Day, Harris had a clean pocket and his first read was consistently open to this past week, where he was feeling the heat from all directions.

Several plays by the Calgary Stampeders defence really stand out. Banks’ first career sack was the result of a brilliant outside/inside move to beat left tackle De’Ondre Wesley. I’m convinced on his second sack that Harris underrated the speed of this 260-pound lineman. Harris was rolling out to his left looking at multiple targets and collapsed at the last second as Banks’ closing speed got the job done. Harris could have got rid of the ball, but I suspect he thought he had an extra beat and he did not. There was a spin move on sack number three by Shawn Lemon who blew by poor Wesley. Way to go Shawn, at the age of 33, for putting on a move usually seen by players 10 years younger! That play happened so fast the announcers assumed there must have been an all-out blitz.

One constant on all seven sacks was none of the linemen ever quit on the play. They kept fighting through blocks and hustling to the quarterback even when Trevor had plenty of time to complete a pass. Also, any time you have this high number of quarterback hits there is bound to be at least one or two examples of miscommunication. In this case, it came on sack number four when the only blocker between Lemon and Harris was 175-pound Earnest Edwards. Spoiler alert … Lemon won that battle.

I understand that the adjective “delightful” is rarely used in a football piece but am I the only one who was delighted to see the mix of veteran and rookie getting it done on the weekend? When Shawn Lemon made his CFL debut (September 11th, 2011) Stefen Banks was 14 years old. That duo represents what the Calgary Stampeders infrastructure is all about, consistently developing young talent all the while identifying the best veteran talent.

My last thought is these last two games are a perfect example of just how chaotic this CFL season is going to be. We have no idea what to expect, don’t get too comfortable with any of your sure-fire predictions and just do your best to enjoy the ride.