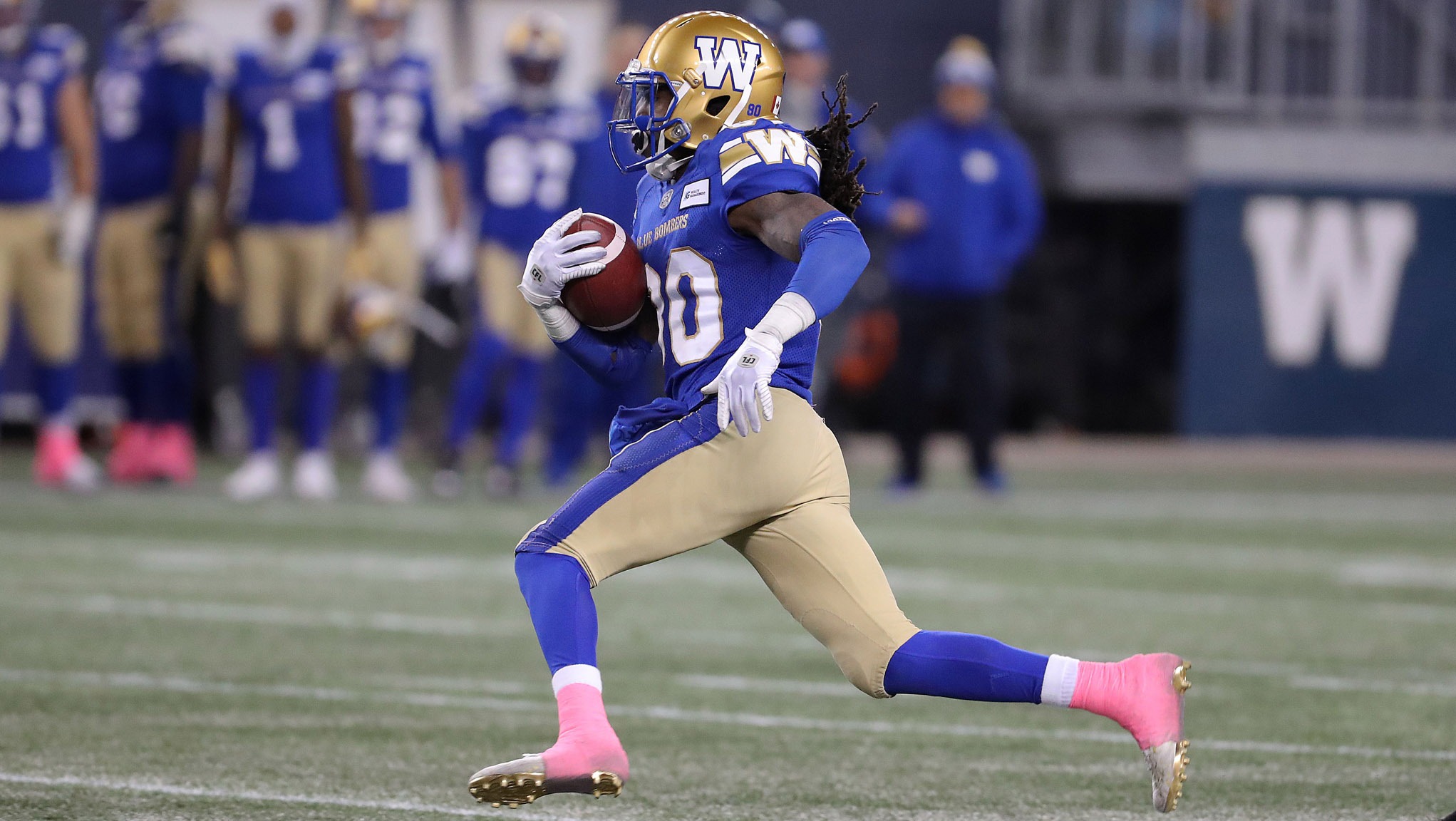 During the halftime of the Winnipeg Blue Bombers 45-0 win over the BC Lions, TSN reporter Sara Orlesky asked Darvin Adams how the team deals with complacency. That’s a legitimate question considering the team was up 16-0 and were 30 minutes away from clinching the Western Division.

His answer: “Every week we just (try to) go 1-0 and that’s our main goal.” Normally I don’t put too much stock in cliché answers but this one was different. If there was any team that could take its foot off the gas it is the Winnipeg Blue Bombers, who have run roughshod through the CFL this year. Coming into this game Winnipeg had won their past six games by double digits. No one would have faulted the Bombers if they weren’t at their best and sleepwalked through this contest.

I understand the bigger storylines from this past week surround the brother-on-brother war between Craig and Dave Dickenson with Saskatchewan beating Calgary 20-17 giving Cody Fajardo his first win against the Stampeders. Montreal’s victory over Toronto has so many divisional implications, especially with Hamilton winning. For myself, I was more fascinated with just how clinical Mike O’Shea’s team went about dispatching the Lions. There was something so primal about it that I had to go back and watch it over again.

Pat Steinberg wrote in his latest piece about the Bombers, “What else is there to say?” It is often difficult to write about such consistent excellence because at times you can be left with a loss of words, an inability to find new superlatives to hand out to this wrecking crew, but allow me to try.

RELATED
» Steinberg’s MMQB: Appreciating the Blue Bombers
» Watch: Jefferson gets in on the scoring with pick-six
» All three phases contribute in Bombers win over Lions

What stands out on the four touchdown drives was just how easy it all looked for Zach Collaros and his assortment of high-end weapons. The team was without Andrew Harris and you wouldn’t know it with how efficient they were. You can look at so many different statistics to measure offensive excellence but for me the one that stands out is how many second and longs your team faced.

I went back and watched the four scoring drives and only once did they need to convert more than six yards on a second-down play. Just once! If you’re wondering, it was a second-and-eight and spoiler alert, Collaros easily found Adams for a first down. The Lions had no answer. On the first touchdown to Kenny Lawler, Collaros put the ball where there were only two outcomes, incomplete pass or touchdown. Lawler climbed up for the 14-yard score and we were off and running in the first quarter.

The next scoring drive needed just six plays and under four minutes to go 95 yards and a 15-0 lead. The best part of this drive was how smart Collaros was beating the Lions’ blitz on a 52-yard gain to Adams. Darvin was so wide open I initially wondered how many defensive backs fell down. Upon a second glance you see Collaros faking a short pass to Nic Demski in the flat, which sucked in the defence, leaving Adams feeling awfully lonely in the middle of the field. It was such a decisive and smart play by the Bombers’ signal caller in the face of a six-man blitz. Rasheed Bailey would score soon after and this game had all the markings of a blowout.

The final touchdown drive was pure catnip for those of us who love to watch dominant offensive line play. Third-string running back Johnny Augustine was not touched for the first 24 yards of his 53-yard run at the end of the third quarter. Augustine made one cut and suddenly there was nothing but glorious daylight in front of him. Lawler would collect his second score of the day and that was the last we would see of Collaros.

On the other side of the ball, it was the Bombers’ defensive line setting the tone with Steven Richardson, Jackson Jeffcoat, Willie Jefferson and Jake Thomas often finding themselves all collectively meeting in the Lions’ backfield with the result often being a Michael Reilly sack. Willie Jefferson again showed why he is the most athletic player in the league on his leaping interception return touchdown, aided by Brendan Alexander’s perfectly timed blitz. He looked like the living embodiment of being shot out of a cannon. I felt bad for Reilly on that play; he was doomed the moment the ball was snapped.

The most entertaining moment of the night came soon after backup QB Sean McGuire fumbled the ball on a failed third-and-short attempt in the second quarter. On the next play, Jeffcoat literally pushed the left tackle into Reilly while fighting off the Lions’ left guard. This act of brute force caused a rushed incompletion. BC would punt soon after.

I could go on and rave about a number of other highlight-worthy plays, such as Janarion Grant’s punt return touchdown or Marc Liegghio’s perfectly placed punt, but you get the idea. On a night where the Bombers easily could have gone into relax mode they choose to leave no doubt with their 45-0 shutout win.

This may be the final time we see this level of dominance by Winnipeg until the playoffs. I wouldn’t be surprised if O’Shea takes out many of his key starters in the second halves of games. Let younger players like Sean McGuire and Johnny Augustine get more live reps. You never know when you will need a backup to step up in a key moment of a big game. The Bombers won the 2019 Grey Cup with the inferior record so I’m sure management is not as concerned with what the final regular season tally looks like. I imagine O’Shea and company are crafting the right strategy that balances keeping players game ready with maintaining their stars’ health for a Grey Cup run.

So, if that was the final time in the regular season we see Winnipeg go full throttle for 60 minutes all I can say is I’m glad to have witnessed it for the near-perfect execution on the field. I wonder what all these stars will look like come the playoffs?