One of my favourite things to do during the CFL season is brag about my picks record.

The past three seasons I have defeated everyone who works around here at CFL.ca, which is a remarkable accomplishment considering how much smarter all the other writers are compared to me. Before you say it, I know I can be insufferable when it comes to me waving my record around. I have no doubt that some of my fellow writers must find me obnoxious (Ferguson, Marshall) and if I may pull back the curtain for a moment a wee bit cowardly with my choices all these years.

You see, the key to my “success” is that I rarely take a chance; I always take the safe bet. If Toronto is travelling out West, you can be sure I am going to put my fandom aside and choose the Argonauts’ opponent while avoiding the gaze of my bedside framed photo of Pinball Clemons. If Bo Levi Mitchell is starting, there is a 99 per cent chance I’m taking the Stampeders no matter who the opposition is or whether or not they are at McMahon Stadium. I avoid the sexy upset picks like cauliflower on my dinner plate and the result is I need to need lose 20 pounds but I rarely lose when it comes to my prognostications. 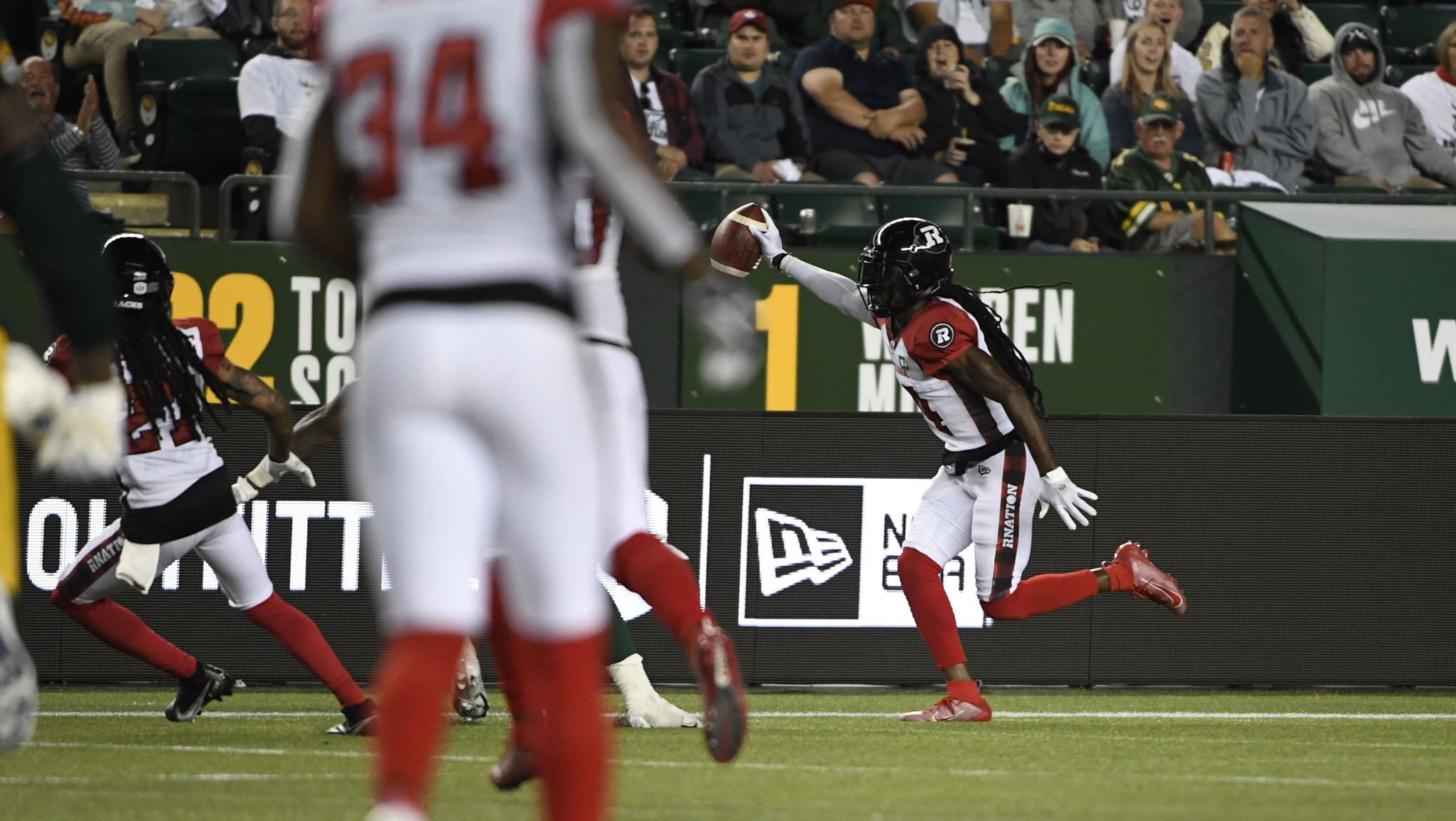 Abdul Kanneh took a win from the Edmonton Elks on Saturday, running a 102-yard interception back for a touchdown (Photo: Edmonton Elks)

You would think I would be fairly upset to wake up on Sunday morning and see I went 0-4 for the week.

Yes, my pride is hurt and damn do I have some catching up to do in a race that I care far more about than I should but I’ll be honest: I’m kind of thrilled I was so dead wrong. Predictable is the enemy of the sports fan.

It’s why so many basketball fans get upset about the formation of super teams; we can correctly predict months ahead of time exactly what is going to happen in the playoffs if the newest NBA juggernaut is healthy. It’s like being a Leafs fan; we know what’s going to happen once the playoffs start.
Same goes for the CFL.

I have always admired the supreme organizational excellence of Calgary, the high-end quarterback play across the Western provinces and the overall general level of elite talent dotted all over Vancouver, Calgary, Edmonton, Regina and Winnipeg over the past two decades. The only downside to this talent imbalance is that it tends to lead to predictable regular-season results especially when those Eastern Time Zone teams travel west. This development is fantastic for my picks record but not so much for the pure sports fan in me. Enter Week 1 of the season.

The Ottawa REDBLACKS and Toronto Argonauts went 7-29 in 2019 and both earned road wins against Edmonton and Calgary, who finished a collective 20-16. I would be thrilled to have the worst record among all my esteemed peers if it meant we got games like we did on Saturday night. Ottawa went full “REDBLACK” in their win over the Elks relying on defence and special teams. Lewis Ward made all of his field goals, including two from over 50 yards; Devonte Dedmon had 160 return yards and Richie Leone’s punts kept pushing back Trevor Harris and the Edmonton offence.

Abdul Kanneh almost had as many points as the entire Ottawa team with his interception return touchdown, the only major on the night for either squad. On most nights you’re going to lose when you’re outgained 443 to 127 yards and you average only 2.2 yards per play, but on this night Ottawa executed the perfect rope-a-dope, capitalizing on three Trevor Harris interceptions.

I’m not even mad that fullback Justin Tuck was tackled at the one-yard line by Kanneh and Don Unamba as he desperately lunged toward the goal line for what would have been the game winning touchdown for Edmonton. Yes, I was a yard away from 1-3 but I’d rather live in a world where upsets happen, especially for a team coming off that disastrous 3-15 season. Maybe we all should have known an upset would happen. Remember in 2019, Ottawa started the year with victories over Calgary and Saskatchewan. They would win just one more game the entire season.

You think I’m upset that Calgary lost 23-20 to Toronto? Just listen to this spicy quote from Bo Levi Mitchell: “I’ve been a part of 19 losses in this league and that definitely felt like one of the worst ones because I didn’t feel like they did anything to beat us.”

Not only is he taking a shot at the Boatmen but I also enjoy the sneaky humble brag as he slips in he’s only lost 19 games in his career. Well done by the Stampeders’ quarterback.

This was a super fun game, with Toronto outscoring Calgary 11-3 in the final frame helping to solidify the “Matt Cauz is an idiot” theme.

I love that this game turned because elder statesman Charleston Hughes recovered the fumble he forced on running back Ka’Deem Carey. Moments after McLeod Bethel-Thompson would find Kurleigh Gittens Jr. and soon a game that Calgary was in control of was suddenly tied at 20. The best part of that touchdown pass was Thompson gushing about Eric Rodgers block on linebacker Darnell Sankey that gave MBT the time he needed.

How can you not love a quarterback who has this to say about a receiver block?

“It was the best play of the game, hands down. For a receiver to make a play like that, at that time, to see the blitz, it was absolutely phenomenal. It was one of the best plays I’ve ever seen.”

OK, yes it was an impressive block, as Sankey has about 30 pounds on Rogers but I’m not so sure about it being one of the best plays ever. There’s a reason so many people are rooting for Thompson to finally have a permanent starting position.

The moment Jaelon Acklin collected that beautifully arched 37-yard pass from Jeremiah Masoli, I was feeling great about my Hamilton pick. Nine Hamilton punts, a conceded safety, two Masoli interceptions and a lost fumble later and my Week One had gotten off to a lousy start.

At the very least the home crowd got a win and I just learned that Bombers back-up running back turned star-in-the-making Brady Oliveira spends his off time rescuing puppies. Seriously I dare you to take a look at this video and not root for Oliveira. It’s impossible. So, if I’m going to lose, I’d rather it be to this hero.

Finally, I think I’m allowed a mulligan in my BC Lions’ pick over the Saskatchewan Roughriders.

I thought Nathan Rourke played pretty well after a dreadful start and there is plenty for him to build on. At the very least, the Lions look to have a very capable backup behind Michael Reilly. Just like in the Winnipeg game, I am more than happy to sacrifice a win so that the deliriously delighted crowd at Mosaic Stadium gets to leave happy.

I would like to say this is because I’m such a magnanimous fella but I imagine many of my cfl co-workers (O’Leary, Chris) would disagree with that self-assessment. Here’s hoping for another “lousy” result next week.