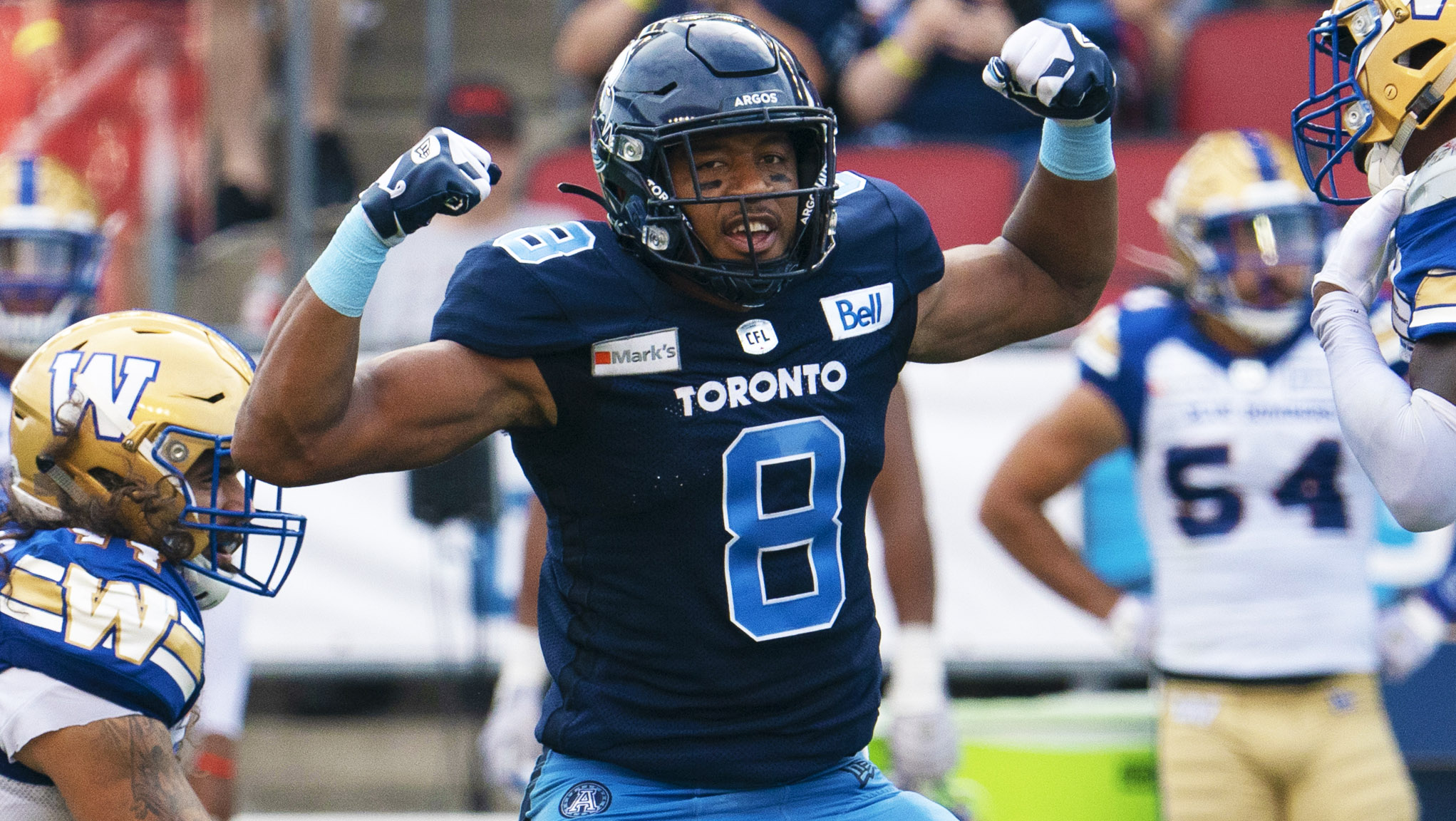 I want to apologize to all the fans sitting in section 111 at BMO Field on Saturday afternoon.

I imagine most of them were just excited to finally take in a live CFL game and root for their hometown Toronto Argonauts who defeated the Winnipeg Blue Bombers 30-23. They didn’t know what was coming their way, how could they?

Two hours earlier I was with a group of eight guys seated around a large table at the Brazen Head Irish Pub in Liberty Village led by TSN 1050 Producer and the Host of ‘TSN Edge’ Aaron Korolnek. TSN Football Insider Dave Naylor refers to him as the “pied piper of the Toronto Argonauts’ and it is hard to argue.

There is this stereotype that the majority of Argonaut games are filled with men and women even older than I am, well on this date that could not be further from the truth. Of this group of men, I was the oldest at 46. The best joke made at my expense was wondering what it was like to watch ‘Citizen Kane’ in theatres. This barb was the result of my mistake of referencing Han Solo. The rest of the parade of degenerates are all in their early 30’s. For this column instead of reviewing the game, Toronto was clearly the better team led by Nick Arbuckle, I wanted to give as full account of that day that I am allowed to do without breaking the rules around here regarding what is considered “good taste.”

Great day! Gonna do a column about this day for @CFL
So many people we need to apologize to. @TorontoArgos https://t.co/rKxQsF3pE1

Back to the bar. I need to stress that everyone took public transportation to the game as on a hot day like this, beer was being consumed at a far quicker rate. One gentleman sitting in front of me downed the final third of his beer in seconds before we had to leave; an impressive feat considering it was one of those giant novelty sized German beer steins.

The important part of this story, and the source of much of our noise during the game, was we were placing an array of single-game player prop bets. If you want to market the Toronto Argonauts game experience, our table at 2:45 p.m. ET would have been perfect. Names like John White, Darvin Adams and total Zach Collaros interceptions were being argued over giant chicken sandwiches and Caesars. The consensus bets were the Over for Eric Rogers receiving yards and the Under for receptions and receiving yards for Kenny Lawler. With our bets in order, we were off to BMO Field.

My favourite novelties about attending an Argo game are all the random jersey sightings. It’s the only time of year I get to see a Paul Masotti jersey. Huge shout out to the person wearing a Chris Schultz jersey. This was the one sad moment in a day filled with sun, cheap beer and big plays from DaVaris Daniels.

Back to the debauchery. You know when you go to a game and there is a group of people that are so obnoxious that everyone in the section absolutely hates? That had to be us. I legitimately felt bad for all the fans that had to listen to us yell and scream every time Rogers made a catch or curse the heavens and the Argonauts coaching staff when Rogers wasn’t targeted on every single passing play. The crowd around us had to be confused how a group of grown men would go nuts over a nine-yard reception but then be angry when our favourite team had a big play from a player not named Rogers.

Beyond the players, there were two clear MVPs on this sweltering Saturday: the clouds who tried their best to block that giant blast furnace glowing orb and the mini-Argo towels. Next to rooting for the home team, I can guarantee you the majority of the fans were cheering just as passionately for the clouds to beat out the sun. As for the double blue towels, they were used to wipe away the sweat as much as they were used to cheer on the Boatmen. On the opposite end the LVP had to be the tea and hot chocolate options at BMO. I asked the staff how many cups of hot chocolate they had sold, the official count by the late first quarter was “zero.”

The lowest moment of the day was not how bad I looked in all Instagram posts or when one of our group that wanted to try to get specific Instagram posts on the Jumbotron said, “I may have spelled together wrong.” Nope, the most embarrassing/hilarious moment occurred when several members of our group started getting in a playful verbal exchange with … wait for it … a nine-year-old child!

The kid was a Bombers fan and started shooting us a stink eye early on and started jawing at us. I fully expected that this is motley crew would take some justified heat for our behaviour, I just didn’t expect it from someone under 10 years old. Soon afterwards, he started chucking Skittles at us, which we rightfully deserved. This was not my proudest moment as a sports fan. Thankfully our tribe and this lone warrior became friends, we learned his name, and for much of the first half, Owen was trying to land the Skittles into the mouths of all these strange and loud adults. I would like to formally apologize to Owen’s father for having to experience all of this. Much to the relief of all the fans in Section 111 and nearby sections we decided to move to the shady section for the second half.

If the first half was all about rooting for Eric Rogers to produce, the second half was all about making sure Kenny Lawler did not. We were feeling great about ourselves for most of the first three quarters but as the game went on Zach Collaros started finding Lawler and just like that a game that Toronto was in control of became far more compelling than it should have been. Again, if you want to make any CFL game more interesting try dipping your toe in all the different player prop bets. Every Collaros incompletion was met with far too much enthusiasm.

Our new section was confused about why we got excited that it was Rasheed Bailey that caught a late touchdown pass to cut the lead to 30-23, it wasn’t because we had changed allegiances but rather it was because it wasn’t Lawler who hauled in the score. Once again, we had a section of football fans confused about who we were rooting for and I can only imagine a little miffed about who these hooligans were.

As for second half apologies, I have two to make. First to Tyler Crapigna, who made the critical error of waving to us when the rowdiest of our group called out his name. That was all he needed to heckle Tyler several times in the second half. Poor Crapigna was trying to be nice and instead he had to endure four to five slightly slurring nonsensical jokes thrown his way. The other apology is to the early 20-year-old woman who channeled her inner Owen and also sent the stink eye in our general direction. Once again, it was well deserved.

Now while I don’t recommend our decibel level or acting like a bunch of trained seals trying to catch Skittles being tossed at you by a child, I do suggest just about everything else. The staff at BMO were exceptional, we got in and out of the stadium easily and overall, it was a great day of football.

Some of the guys had never been to a CFL game before and they were hooked by the end. Yes, part of the reason was we hit on all our bets but it was such a joy to be back at a live sporting event, being a part of a crowd and take in a football game. Just remember to bring sunscreen.