Hey Toronto Argonauts, fans I hope you appreciated my reverse jinx by being the only CFL.ca writer to take Ottawa to win in last week’s picks.

The Argonauts needed every bit of my “luck” to ward off a feisty REDBLACKS team who led until early in the fourth quarter. The fact that this game was so close is a testament to Ottawa for not rolling over, for fighting hard in a losing season.

On the other side of the coin sits the question: Should this game have been so close? For the Boatmen the stakes were far higher, with the team eyeing an East Division title, yet this was a three-point game right until the conclusion.

I asked what seems like a ridiculous question to Marshall Ferguson on my radio show on Monday: Are the Argonauts a good team? On many levels I understand why fans would push back on this idea. The team is 8-4, they have talent all over the roster and they are the only team in Canada to have beaten the Winnipeg Blue Bombers. That was no fluke win, as Toronto led by two touchdowns at the three-minute warning. I was there that day and the Argonauts were the better team. 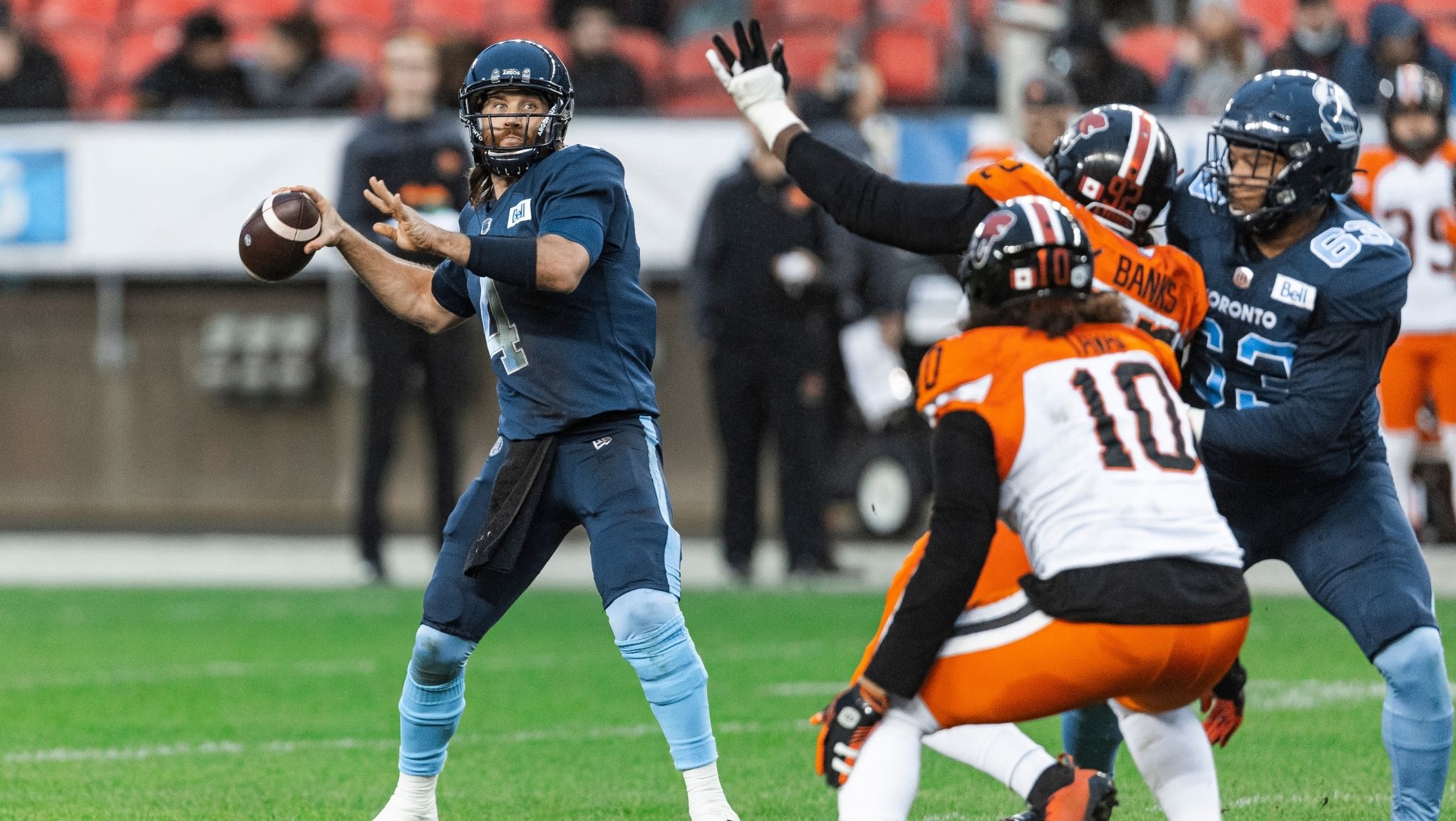 It hasn’t been the smoothest of sailing for McLeod Bethel-Thompson and the Argos in the last few weeks, but the team has managed to keep its hold on the top spot in the East Division (Photo: Argonauts.ca)

Marshall wasn’t sure if Toronto was “good” but they are a damn “fun” team to follow. I loved this answer and I wanted to explore it a bit more as we get set for the game of the year in the East on Friday night as Hamilton makes that hellish trek east on the QEW to face off against its bitter rival at BMO Field. First, let’s address just how to evaluate the Argonauts. For the sports fan whose sole focus is on the final result, I’m not going to lie to you. The next paragraph isn’t going to exactly thrill you.

The funny thing about the Argos is for the past month the analysis has been that eventually they would start losing these close games, that regression would hit them and that it is unsustainable to win week-in and week-out by a field goal or less. Well, that is exactly what has happened, as their 23-20 victory in Ottawa marked their sixth win by a margin of three points or less.

Both things can be true. Ryan Dinwiddie, Michael Clemons and all the players should be celebrated for their record after several down years. But you are also allowed to have a nagging feeling about a team that always wins by one score and when they lose, it’s by double digits. Even the most ardent Toronto booster has to be made a wee bit nervous by that fact.

I understand that sports fans have a dicey relationship with the concept of luck and the role it plays in the fortunes of their favourite team but as a general rule, when the majority of your games are won by the narrowest of margins, luck has to be considered. A couple weeks ago the Argonauts were victorious over a BC Lions team that missed three field goals in the last five-and-a-half minutes! There are plenty of players on that day that deserve praise for the win but let’s not pretend that fortune did not favour Toronto on those three Jimmy Camacho misses.

Continuing on the theme that both things can be true, I believe good teams know how to close out tight games and won’t get rattled, just as I know that at the end of the day a team’s overall record in one-score games will end up close to .500. 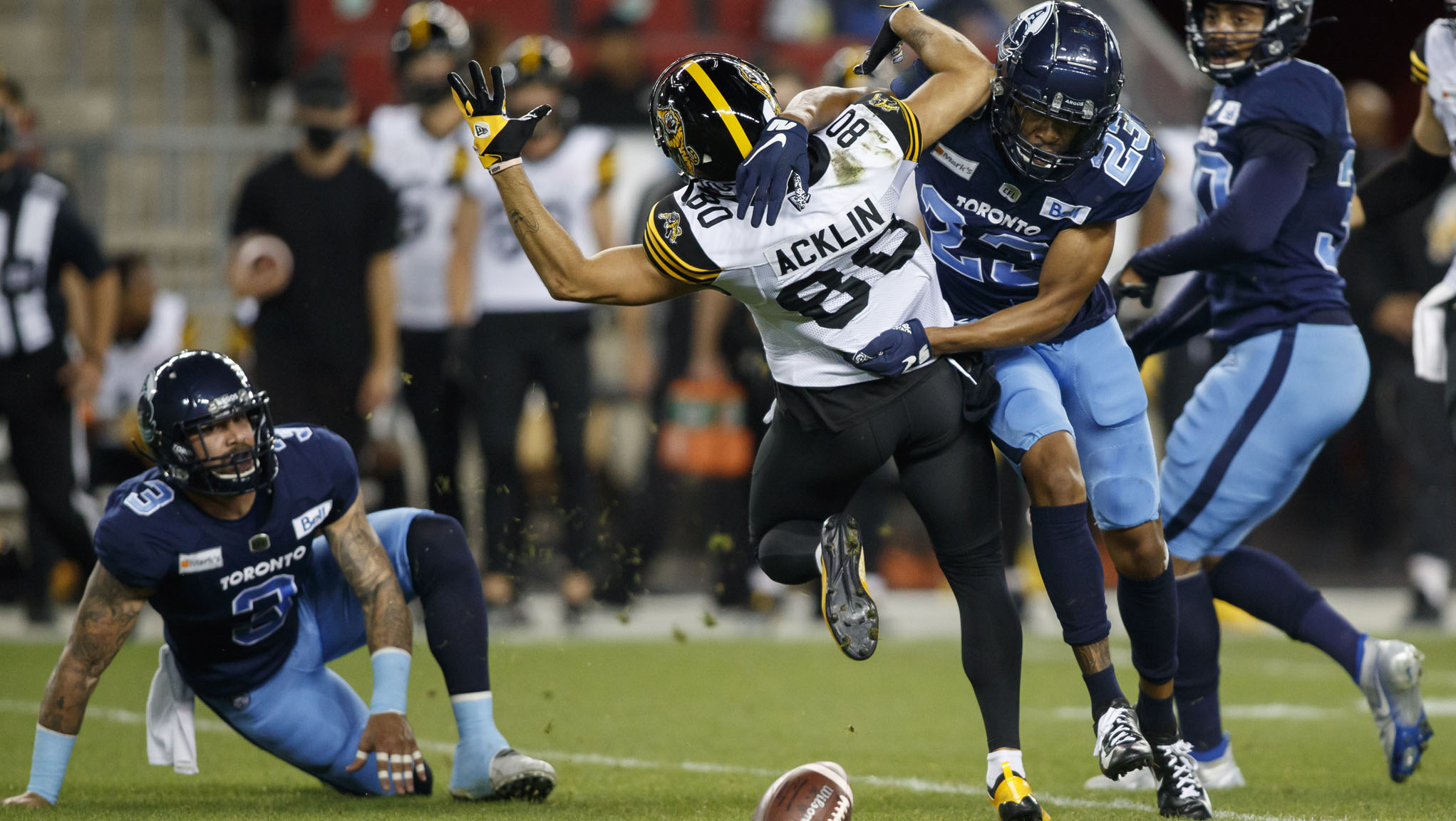 With the Ticats’ offence coming into form with the return of Jeremiah Masoli, Jeff Richards and the Argos’ defence will be tested on Friday (Photo: The Canadian Press)

Let’s go to the next adjective, “fun.” I guess I should have predicted just how unpredictable this year would be considering all the new faces but wow, has it been hard to keep up. John White will have 100 yards on the ground against the Blue Bombers, Kurleigh Gittens Jr. will put up back-to-back games with over 100 receiving yards and then in other weeks D.J. Foster will end up the team leader in both rushing and receiving. I’ve witnessed Ricky Collins Jr. tear up Calgary for 126 yards, then not hit the century total again. Toronto doesn’t beat the Bombers without DaVaris Daniels 7-catch, 100-yard day back in Week 3, but since then he has gone over 60 yards just once. Last week it was A.J. Ouellette stepping into the role of ‘Skill Player X’ who dominates with 107 tough ground yards over the REDBLACKS.

I haven’t even mentioned the quarterback chaos that saw McLeod Bethel-Thompson beat Calgary in Week 1, lose his job to Nick Arbuckle, who then beat the Bombers only to be replaced by MBT and was then eventually traded to Edmonton. Seriously, it’s hard to keep up with this weird team but that doesn’t mean it hasn’t been fun. Defensively we’ve seen some philosophical changes with the arrival of Chris Jones and as a team, 14 different players have recorded a sack.

So, what should we expect on Friday? I’m wildly curious to see if Brandon Banks can build off of his 75-yard, one touchdown game against the Lions. A healthy, fully utilized Banks could change the entire complexion of the East. The truth is, I have no idea what will happen at BMO but I feel confident if Toronto wins, it will be a hard fought, close game. Nothing has come easy for Dinwiddie’s squad to this point. Why would I expect that to change?