So the other day I’m cruising cfl.ca, trolling for free agent signings stories when I stumble upon a page where I can watch entire Grey Cups dating back to the 1950s. How did I not know this? Has this been around for ages and I just didn’t notice? I know this may seem like I’m just being a corporate citizen by highlighting “Grey Cup on Demand” but as a football nerd this is manna from heaven. I love watching old games. I’m fascinated with every aspect from how teams ran their offence to the suits that coaches used to wear and everything in between.

For people who don’t have over two hours to spend watching a game but still want the best parts, I am here to help. You reading this may be busy; I imagine many of you have kids. As a professional uncle I have more time on my hands so let me do the heavy lifting for you. I have gone through the 1954 Grey Cup and highlighted some of the most fascinating moments from the game for your entertainment. Lucky for you this is considered one of the first classic Grey Cups, with Edmonton triumphing over Montreal 26-25. Click on this link and follow along. 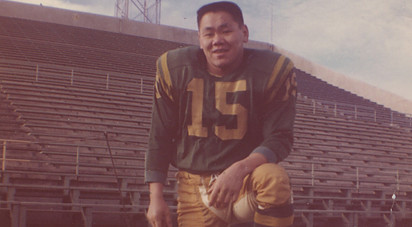 1:30 For everyone who complains about the pre-game being too long, you have no idea how good we’ve got it. The lead up is just the camera panning back and forth on the muddy field with the occasional crowd shot. This will go on until kickoff. Can I get a Norman Kwong feature or Matt Dunigan sitting down with the quarterbacks?

2:23 Wait, are you telling me there was actually a time where the East was the dominant division? I just heard the commentators talking about how this is the 27th time the West has challenged the East for the Grey Cup and only four of the 26 previous games has the West won.

7:35 We get our first shot of future Hall of Famer Norman Kwong! He is referred to him as “Normie.” Good to know obvious/lazy nicknames is not just for hockey.

8:31 Hey look, its Montreal’s Sam Etcheverry and his extra strong jaw line. One of my favourite parts of this is listening to the announcers who sound exactly what you would imagine an old-tyme broadcaster would sound like. “This fella named Sam Etcheverry. Throws that baseball-type of forward pass.”

15:15 Offence looked different back in 1954. I know that is a Captain Obvious point but watching it up close takes a little getting used to. But just when you’re getting bored of a run-centric offence, you have all sorts of madness on the field. On this specific play Edmonton quarterback Bernie Faloney is under centre and he has three backs behind him. Faloney starts to run left, pitches it back to running back Rollie Miles who then throws it to Jackie Parker!

Yes, quarterbacks back then were not the passers we are accustomed to now but wow are they magicians when it comes to ball handling. So many fake handoffs, pitchouts and rollouts. It’s like watching a game of three-card Monte, only replace the cards with a football.

19:05 Maybe because offences were more grounded the announcer’s energy level shoots up whenever there is a pass. On one completion to Earl Lindley: “Faloney’s still got that football…What a beautiful piece of fakery Mr. Faloney pulled that time.” 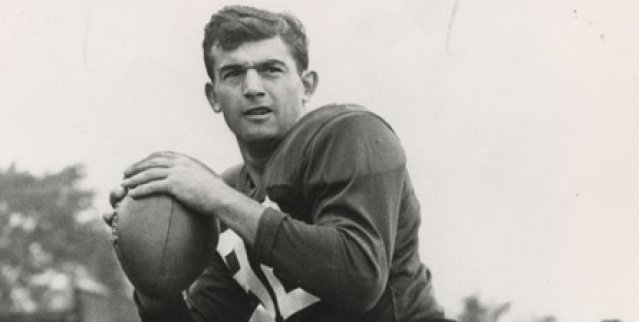 23:00 One of the most thrilling four-yard touchdown passes you’ll ever see as Miles runs for over 50 yards from his left to his right before finding Earl Lindley in the end zone. Your eyes are not deceiving you; Edmonton has gone up 5-0 before the extra point. I had no idea a touchdown was worth five points in 1954. It would move to the traditional six points two years later.

26:06 Maybe my favourite line. After a Sam Etcheverry completed pass to Red O’Quinn, the announcer says, “Gee I don’t know with that start this is going to be a loo loo.” I need to start working that expression into my everyday life. “I just ordered fish and chips and opened my favourite bottle of wine; tonight is going to be a real loo loo.”

30:10 I’ve been waiting for half an hour and it finally happened, the first jump pass! Aesthetically I’m a sucker for a good jump pass. Sure, modern quarterbacks are far more productive/accurate but none of them have the guts to attempt a throw while unnecessarily jumping in the air.

31:15 After a fumble by Edmonton we get a “How do you like them apples, eh?” Did Matt Damon and Ben Affleck rip off that line from this game?

32:00 Jump pass touchdown alert! Red O’Quinn snags a short Etcheverry pass and races 90 yards for the score. Red would finish with 13 receptions for a still-record 316 yards! I feel like this record doesn’t get the attention it deserves.

43:50 I just noticed how close the fans are to the sidelines. They are literally a couple yards from the action. How is this allowed?

53:25 Uh oh, the broadcast is having some technical difficulties. We are treated to a “Do not adjust your set” message. This is still a better production than the Golden Globes.

58:12 For the third time we have a successfully completed option pass from Miles to Parker. Just when you start getting lulled into a steady stream of runs up the middle, Edmonton pulls this off.

1:04:35 The moment where I am reminded that players used to play on both sides of the field. Nice open field tackle by fullback Earl Lindley. I wonder which running backs and receivers would make the best defenders in today’s game?

1:11:55 Red O’Quinn with his second touchdown on the day. I get the feeling that a player’s idea of celebrating is just running extra hard to the sideline after scoring.

Where is the half time show? We couldn’t find a 20-year-old Leonard Cohen and get him to belt out some tunes?

1:49:27 Lindley with another tackle for a loss. This guy is beasting.

2:08:55 This is the sneaky key play of the game. If Twitter was around in 1954 everyone would be freaking out at Montreal’s Douglas Walker for going for a touchdown on the Edmonton seven-yard line. The Alouettes are up 25-14 in the fourth quarter. A field goal makes it a three score game. Instead, for one of the few times Etcheverry is not able to hook up with O’Quinn and Edmonton takes over. Wait, are fans on the field grabbing the ball right now? No one is saying or doing anything about it. What the hell is going on??

2:14:19 Edmonton has cut the lead to 25-18 on a 14-yard touchdown by Glenn Lippman. I am now yelling again about why Montreal did not kick that field goal. This is the most normal I’ve felt as a CFL fan in ages. I just wish I had other people on Twitter to make fun of Montreal’s coaching staff with.

2:22:19 This is the first time I’ve seen a commercial. If you’ll excuse me, I have to get some Prestone anti-freeze.

2:24:12 Oh my god did you see that?? Montreal had this game won and then THAT happened. On a second-and-one at the Edmonton 10-yard line, the Alouettes are in complete control and about to go up 31-18 when Chuck Hunsinger is hit behind the line of scrimmage and fumbles the ball. Jackie Parker swoops in to recover and races 90 yards the other way for the eventual game-winning touchdown. This is such a gut punch moment for Montreal that I’m now OK with the Alouettes winning the 2009 Grey Cup with that 13 men on the field penalty.

2:35:18 The game is over, I think. It must be because here comes the politest storming of the field by fans you’ll ever see. Even the fans climbing on the goal posts doesn’t feel dangerous as they are wearing sensible slacks.

That was more fun than it should have been. If you’re interested in the history of this game, I cannot recommend highly enough carving out some time and watching these old Grey Cups. It’s such a fascinating exercise to get to witness all these football legends in their primes doing battle in classic Grey Cup games.