There are some column ideas I should avoid like the plague. It would be smarter if I bet Ja’Gared Davis that he couldn’t take me down than writing a piece about how the Eastern Division is going to hold serve and not allow a team west of Thunder Bay to travel into the Eastern Time Zone for a playoff game. I should tread carefully on this one, as I have written in the past one of those “Is the East better than the West?” columns early in a CFL season only to be laughed out of the room a month later.

I’m the guy who has praised the 2021 Edmonton downfield passing attack and has a losing picks record, so I know I should run away from this concept. Maybe it is an unwise mixture of hubris and optimism and a lack of wisdom but I’m calling it: The East will end this record four-year run of a Western team crossing over to my backyard for the postseason.

The current crossover format goes back to 1997 when the Damon Allen-led BC Lions punched their playoff ticket despite finishing with an 8-10 record. The Lions, though, were more than deserving to qualify for the playoffs considering the third-place Winnipeg Blue Bombers (yes, they were in the East then) ended that year with just four wins.

Since then, there have been 11 instances of a fourth-place Western squad finishing with a better record than the third-place Eastern team. For those of us that hail from Ontario or Quebec, we are waiting for the day that one of our teams is going in the other direction, but we will save that wistful column for another time. Hey, at least no team from the West has run roughshod through the East to make the Grey Cup!

RELATED
» Landry’s 5 takeaways from Week 10
» Ferguson: How to beat the Blue Bombers
» Power Rankings: Argos on a wave 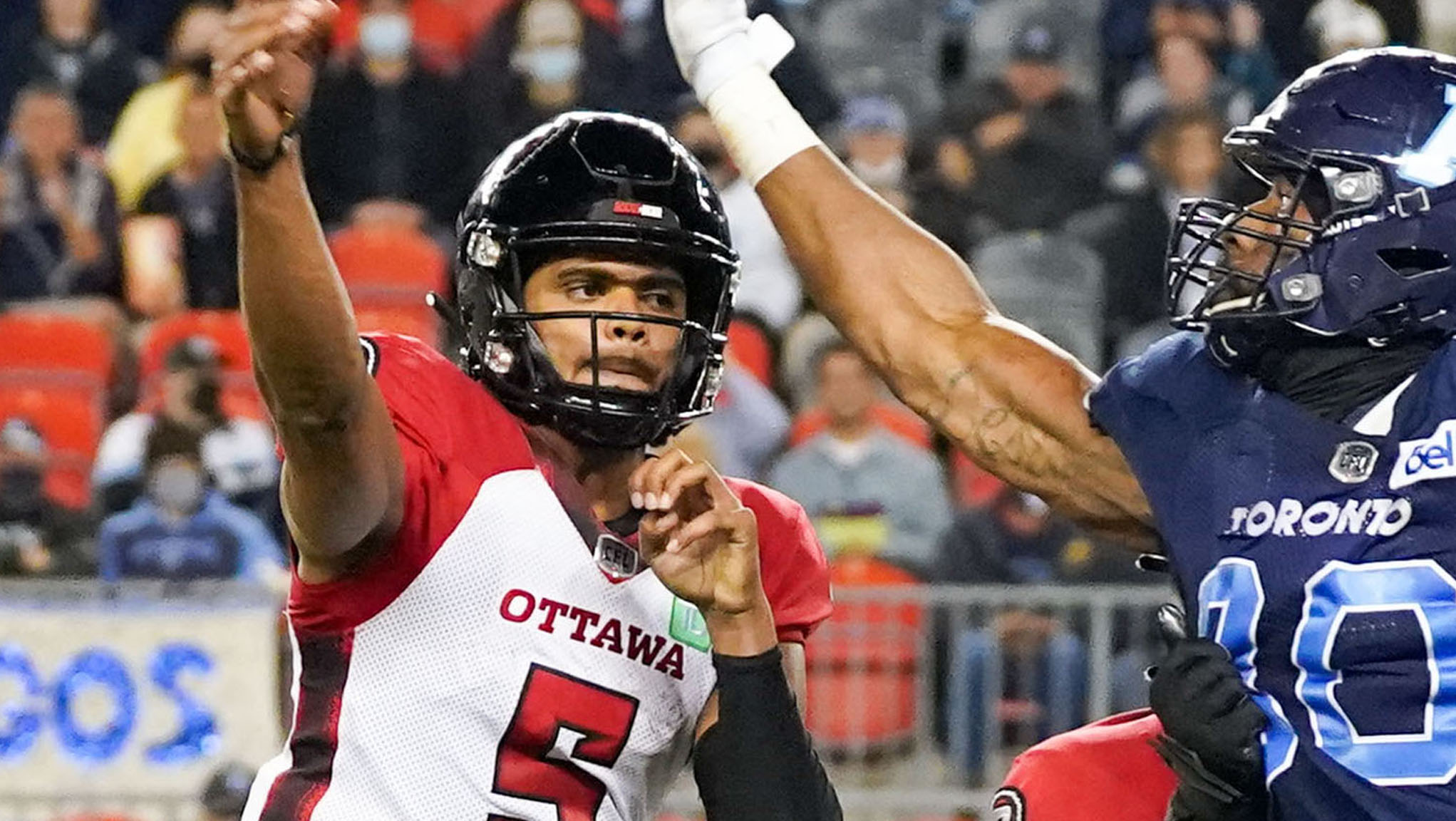 The Ottawa REDBLACKS enter into a crucial stretch, where they’ll face East opponents four out of five games. The outcome will go a long way toward determining the viability of a West crossover (Photo: The Canadian Press)

The last time we did not see the crossover come into effect was back in the simpler, more innocent days of 2015. No COVID, less political division and no one had any idea what a TikToc video was. That season marked the first time since 1983 that every CFL organization hailing from Ontario made the playoffs. Ottawa was a legitimate juggernaut at 12-6, Toronto somehow went 10-8 despite the Pan American games and playoff bound Blue Jays creating havoc with their home schedule (Toronto hosted games in three different provinces, a CFL first!) while the 2015 version of the Hamilton Tiger-Cats is one of the great recent “what-if?” CFL teams. That group was arguably the cream of the CFL crop at 8-2 and leading Edmonton 7-0 before an in-game injury knocked out the MOP favourite Zach Collaros for the season.

Moving back to the present, the 2021 season. Quite possibly, the most important team for this Eastern dream to become a reality are the Ottawa REDBLACKS.  I’m going to need you to be both my sacrificial lamb while also playing spoiler. Four of your next five games are against teams from your own division and I hate to say this, I am going to need you to lose all of them to beef up the contending teams’ respective records.

This is not as easy as it sounds as the REDBLACKS have put up excellent fights against both Toronto (do not let the final score fool you, this was a close contest for much of the game) and Hamilton in the last two weeks. Your most important task will be in Week 13 when you are at home against the Calgary Stampeders.  A win against the current fourth-place Stamps would go a long way to stem the tide of yet another Western dominant season. Listen, Caleb Evans, you have shown more than enough flashes to pull off the upset and between Micah Awe, Abdul Kanneh and Don Unamba I bet the defence has a three turnover generated game in them. I just need Ottawa to channel their inner “2016 Grey Cup” and help the rest of the division.

Oh, hey there Matthew Shiltz, I’m sure this was not how you planned your life journey when it came your professional career but hey here we are. Why not make the best of it? You already stepped in twice in Montreal’s last two games for an injured Vernon Adams Jr. and performed more than admirably. It is a testament to your skills and the entire team around you that you came in for Adams trailing 16-13 against Ottawa with 2:13 left on a third and one and you still helped guide the team to a game-winning touchdown. Now if you could be a buddy for everyone that lives in the 416, 905 and 514 and build on this for the next several games, especially a Week 13 clash against the Saskatchewan Roughriders.

Moving over to Toronto, I will keep this one brief. Please do not even consider trading Nick Arbuckle. Yes, his season has been marred with injuries and inconsistent play, but he is the only quarterback to beat Winnipeg (he was fantastic that day) and if you want to go on a deep playoff run there is an excellent chance you will need solid quarterback play from not one, but two passers.

Hey Hamilton, I know you are less than thrilled about blowing double digit leads at home in back-to-back weeks but everything is going to be fine. Those defeats only help your Eastern brethren, you lost by a mere two points in those two games against the Argonauts and you have the best scoring differential in the East. You will be playing meaningful football in late November.

So, what are the biggest obstacles for the third-place team in the East being usurped by the West? Let’s start with some recent wide receiver developments in Saskatchewan. The Roughriders have scuffled recently with back-to-back losses to Calgary but those defeats were by just nine points and there is some high-end talent coming to Regina. Shaq Evans could be back by Week 12 and GM Jeremy O’Day has signed Duke Williams after a stint with the Buffalo Bills.

Back in 2018, Williams ripped up the league to the tune of 1579 yards and 11 touchdowns. Those two targets would certainly help Cody Fajardo, who has passed for plenty of yards but has a middling eight touchdown passes to go with eight interceptions. It is not a stretch to think we could soon be seeing peak Fajardo for the 5-4 Roughriders.

Moving on to third place in the West, keep an eye on the Lions as they embark on a crossover pivotal two-game stretch in Week 13 and 14 when they do the QEW shuffle against Toronto and Hamilton, with the always dynamic Lucky Whitehead in question to be in the lineup for either match.

Finally, we finish off with my nemesis, the Calgary Stampeders. The team that has caused me more anguish than any other when it comes to picking teams. I feel forsaken by this organization that I have lavished with praise over the past decade that has left me guessing week after week about how they would perform on the field.

Currently they find themselves in that classic fourth-place Western team position that usually results in a crossover Eastern Division playoff game. Ironically since the advent of the crossover in 1997, the Stamps have never ended the year doing battle against Ontario or Quebec and if everything goes according to my plans it will stay that way. But with this being Calgary in the year 2021 who really has any idea?