When Daniel Joseph was 15 years old, he remembers being surrounded by greatness.

He looked around the high school gym where his brother was playing basketball and saw the likes of Anthony Bennett, Tristan Thompson, Tyler Ennis, Jamal Murray and Dylan Brooks.

Joseph, who at the time was playing basketball before making the transition to football, saw the hard work and determination that those guys were putting into their craft and was inspired to do the same.

“Being exposed to that consistently growing up and always being exposed to constantly competing and knowing how to perform while being in a group of guys like that has always been really nice and really beneficial for me, I like to say,” Joseph told reporters on a video conference in December. “It’s allowed me to constantly keep working and keep pushing no matter what the scenario is.”

RELATED
» Costabile: Kurtis Rourke no stranger to following in brother’s footsteps
» Alberta’s Ajou making a name for himself at Clemson
» Costabile: Brown twins living out childhood dream at Illinois 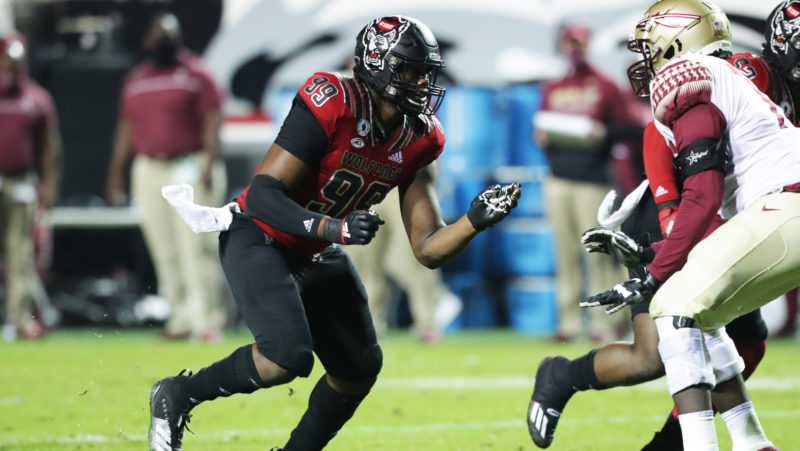 Even though Joseph didn’t pursue basketball like the handful of his hometown counterparts he watched that day did, the six-foot-three, 265-pound defensive lineman did take the lessons he learned from them to the gridiron.

After transferring to North Carolina State following the 2019 season, the Brampton, Ont. native has seemed to find his groove on his new team, already surpassing his sack total (2.5) and tackle total (5.5) in the three seasons he played at Penn State. So far this campaign, Joseph has tallied 6.5 sacks to go along with 37 total tackles.

Just like his brother, Winnipeg Blue Bombers 2017 draft pick Faith Ekakitie, and cousin, BC Lions 2015 draft pick Ese Mrabure-Ajufo, Joseph had hopes of playing basketball professionally. It wasn’t until his junior year of high school that he really started to take football seriously and decided that it would be the path he’d go down.

As a junior, he caught 26 passes for 498 yards and eight majors as a tight end. Then as a senior, he tallied 72 tackles, 2.0 sacks, 25 tackles for loss and two interceptions as a defensive lineman while also suiting up on offence, hauling in 10 receiving touchdowns as a tight end.

“I know for my brother it (transition to football) was more evident because he was a lot bigger and just built like a football player,” said Joseph. “For me, it definitely was a less evident transition.”

Despite it not being as obvious of a transition, it’s worked out marvellously for Joseph.

After high school, Joseph would go on to play three seasons as a member of Nittany Lions. Following the 2019 season, he decided he got everything he needed out of his experience at the school and transferred to NC State, which evidently was one of the schools that had recruited him in the first place, and was with his new team by the end of February 2020.

“I just knew very well that NC State was a place that had already had very good history in terms of defensive players in particular,” said Joseph when asked why he chose his new school.

“I wasn’t totally unaware of who NC State was, they also recruited me out of high school,” he continued. “I was familiar with them.”

As he learned from the now-NBA players he watched many years ago, he’s continued to keep working and keep pushing as his football journey continues. Joseph is taking those lessons and says he’s staying present and not worrying too much about where he ends up playing after his collegiate career.

“I don’t want to get ahead of myself,” he said when asked about where he’d like to play professionally. “I want to make sure I stay in the moment and stay where I am presently and make sure I capitalize and maximize everything that I need to get to that point.

“I think if I get too carried away thinking about the end goal, people tend to forget the steps needed to get to that end goal.”