Right back in the thick of it.

For quarterbacks Jake Maier, Michael O’Connor and Dakota Prukop, it’s been a battle to impress through training camp so far as they vie for the backup spot behind starter Bo Levi Mitchell.

Right from the get-go, they’ve all been dialed in.

“I think all of them have done a great job of putting in the effort and eager to learn,” said Stampeders quarterback coach Marc Mueller. “They are all high competitors and are driven to get better and that’s what you love to see as a coach. They help each other out, ask questions when needed, and have that fire to be better with each day that passes here at camp.

“The important thing is that they are themselves and not worrying how the other guy is doing. We want them to be the best they can be and not compare themselves. This is wide open competition and the decision is in their hands with how much they put into it.”

RELATED
» Trusting the Process: Stamps tap into their systems for 2021
» Battle Tested: 3 key defensive veterans in Calgary
» Rene Paredes set to be a stabilizing presence in 2021 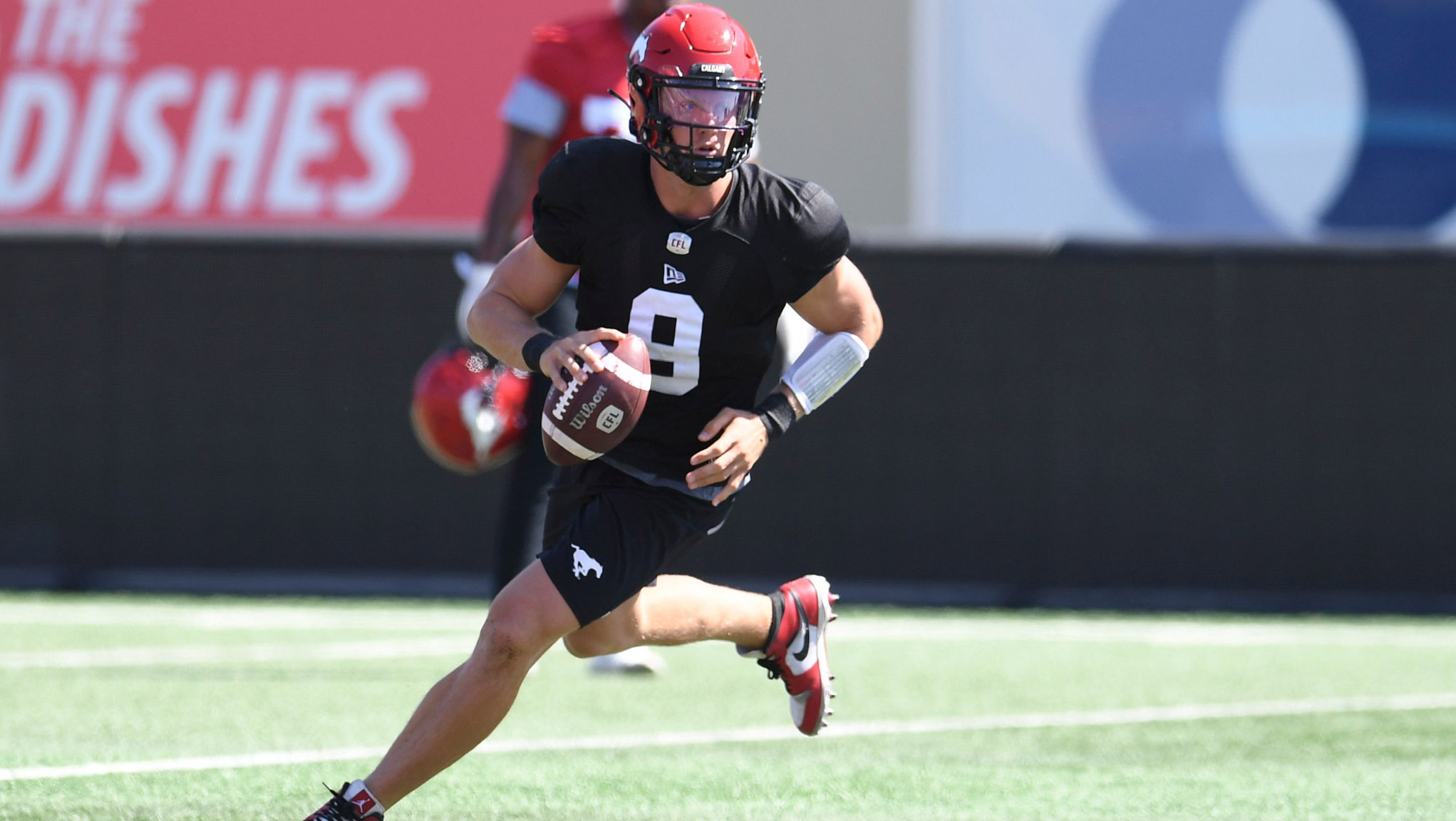 Dakota Prukop brings three years’ experience to the Stampeders, which is the most of any of the QBs vying for the backup job behind Bo Levi Mitchell (Photo: Stampeders.com)

Prukop enters his fourth season in the CFL, spending the previous three seasons with the Toronto Argonauts from 2017 to 2020 before signing on with the Red and White. The 27-year-old holds career totals of 18 completions for 284 yards and three touchdowns.

O’Connor heads into his second season, originally drafted by the Argos in the third round of the 2019 CFL Draft. He appeared in two games his rookie season, completing 15 passes for 173 yards and one touchdown.

Maier is a fresh face to the CFL, finishing a four-year college career spent with one season at Long Beach City College and three at the University of California. He racked up accolades while in college, named the Big Sky Conference’s newcomer of the year in 2017 and in 2018 he was the conference’s offensive player of the year and first-team quarterback.

“Each guy has their strengths and we’ve seen their strengths get stronger,” Mueller said. “Dakota is very detail oriented, he’s able to stand in the pocket with patience, sees the field well and understands what’s going on. Michael takes what’s available and doesn’t force anything while showing that he can throw it down field with consistency. Jake is a younger guy who has really grown each day and is very eager in every drill we run. This is his first time playing the CFL-style of game coming from the States and he’s gotten more comfortable and it’s shown in his decision making.

“They have the resources needed either in myself, Dave (Dickenson), John (Hufnagel) or Bo, and each one has maximized that and in the end, it will really pay off for them all.”

Having someone like Mitchell to lean on and pick his brain has proven to be valuable for the trio. After all, not everyone has the chance to practice alongside and watch a player of his calibre.

“He’s been great with us. He is always open to answer questions and just so supportive,” O’Connor said. “It’s been such a pleasure to take the field with him and really see how he understands the game and his approach.

“He’s arguably the best quarterback in the league and being here at camp with him is a treat. Overall, in general, I think we all are so appreciative for this opportunity we’ve been given and making the most of every day.”

There’s no secret that the Stamps’ offensive playbook is complex and creative, which presented a challenge to the newcomers.

But it was one they welcomed.

“It’s not an exaggeration,” Prukop laughed. “It’s extremely complex and detail oriented offence but as a quarterback you love that. If you are willing to put in the work you love those kinds of offences because it challenges you on a mental level to really understand why it’s done a certain way and what makes it successful.  All the QBs have done a great job with it and as the days pass you see more confidence in executing.

“It took a lot of studying up,” O’Connor agreed. “There’s the verbiage you have to get used to and the longer calls coming in you aren’t familiar with, so it was all about doing the prep work off the field to nail it down. Once we got to on the field it then translates from being on a page to being right in front of you developing.”

While all three are competing for a job, they are also being good teammates – helping one another on the field and overall pushing each other.

“When you are competing with people that they are at their best and you are at yours, that is when the whole room rises,” Prukop said. “That’s what you want, you want to be in an environment to be at your best every day because everyone else is.

“The Latin word of competition means coming together. Every QB has the same standard to push to be the best version of themselves. We aren’t going out there to try and beat Bo. We are going to be the best we can be and maximize our individual potential and when we work together that’s when we thrive.”