VANCOUVER — When asked if there was any fear that a deal with the BC Lions wouldn’t get done before free agency opened, veteran receiver Bryan Burnham was candid.

‘I kind of had gotten to the point a week ago where I thought my days in BC were done and I was going to be moving on,” Burnham said on Monday. “Luckily, they were able to make something happen to get this done.”

When all was said and done, the two sides were able to come to terms on a new deal that will see the 30-year-old stay in the lower mainland through 2021.

BC is the only home that Burnham has ever known, signing with the team in 2014 and spending all six of his CFL seasons as a member of the Leos. 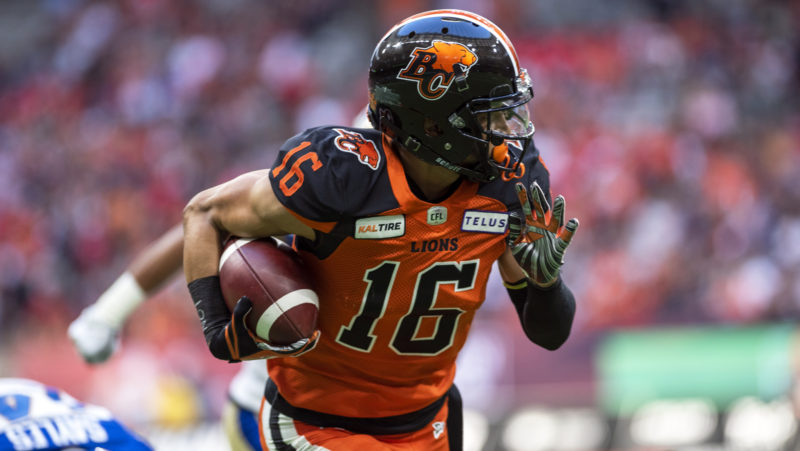 Bryan Burnham signed a new deal to return to the BC Lions on Monday. (Jimmy Jeong/CFL.ca)

Heading into free agency on Feb. 9, Burnham was ranked second on CFL.ca’s Top 30 Pending Free Agents list and was one of only two pass-catchers to crack the top 10.

The Moorestown, New Jersey native has been in top form since the 2016 season, reaching at least 1,000 yards and 65 catches in each season.

2019 served as the best year of the Tulsa product’s career to date, as Burnham posted career-highs with 100 catches, 1,492 yards, and 11 touchdowns while playing in 17 games.

For his career, Burnham has 368 catches for 5,651 yards and 33 scores. He currently sits 10th in Lions history in receiving yards and eighth in touchdowns.

Negotiations were also different from past talks due to the new co-general manager duo of Rick Campbell and Neil McEvoy. Former general manager Ed Hervey somewhat surprisingly stepped down in October, with the pair being promoted in his stead.

As it goes with many new contracts, the two sides had different salary numbers in mind and they had to go back and forth to get something done. It’s not the first time that Burnham has gone through it and it likely won’t be the last.

“Negotiations were not fun but that’s how it is,” Burnham said. “At the end of the day, you’ve got to take a step back, and for me personally, I know it’s a business. There’s things that happen throughout negotiations with everybody where you could take things personally and take it as a personal attack on yourself and feel a certain type of way. But at the end of the day, I know that it’s business.

“They’re trying to put together the best team that they can and although things didn’t go exactly the way I would have hoped, we got a deal done.”

It would be truly odd to see Burnham in anything other than a Lions uniform, but it nearly happened, as he eluded to. As one of the top receivers in the league, he had to explore his options and get the best deal for his future, and he did that with BC.

But that doesn’t mean that there weren’t other suitors.

“I won’t go into too much detail but once we got to this point where the window was coming up, we wanted to take the time to hear what was out there and Winnipeg was one of the big ones who called, and things got interesting,” Burnham said. “There was kind of a number that it would take for me to stay in BC and a number it would take for me to leave and BC got to that number and nobody got to the number for me to leave.

“All respect in the world to Winnipeg and what their franchise has done and their fans. A lot of people reached out on social media and it’s a great feeling to have when people want you. But at the end of the day, I’m very happy that we were able to get it done with BC.”

The Lions finished last in the West Division in 2019 with a 5-13 record. They were still pushing for a playoff spot until the end of the year but came up just short. With franchise pivot Mike Reilly under contract, he now has his top target locked in for a season where the franchise will be looking to make it back to the postseason.

While there’s still work to be done this off-season, BC has made sure to lock up its biggest name early. So they can now turn their attention to external additions and making the team as a whole better through free agency and the draft.