The chance to help the Winnipeg Blue Bombers accomplish something for the first time in almost 60 years is very intriguing for Nic Demski.

A win over the Hamilton Tiger-Cats in the 108th Grey Cup game at Tim Hortons Field on Sunday would give the Bombers their first back-to-back CFL titles since 1961-1962.

“It would mean a lot,” said Demski, part of the Bombers fleet of sure-handed receivers. “I’d be lying to you if it wasn’t on the back of my mind. We’ve got to focus on going 1-0 this week and getting the Grey Cup.’’

The Bombers won their first CFL championship in 29 years with a 33-12 win over the Tiger-Cats in the 2019 Grey Cup game.  A win Sunday — after the 2020 season was cancelled due to COVID-19 — would put the current edition of team in the same company of Bud Grant, Ken Pleon and Ernie Pitts.

“That would be a crazy accomplishment, but I don’t want to get too ahead of myself,” said Demski, a West Division All-Star.

Having a deep group of receivers played a big role in Winnipeg finishing with a league-leading 11-3 record this season.

RELATED
» Everything you need to know about GC Week so far
» Dane Evans to start for Ticats in GC108
» Through the Lens: Bombers enjoy first practice in Hamilton
» Quote Board: Standout statements from head coaches press conference 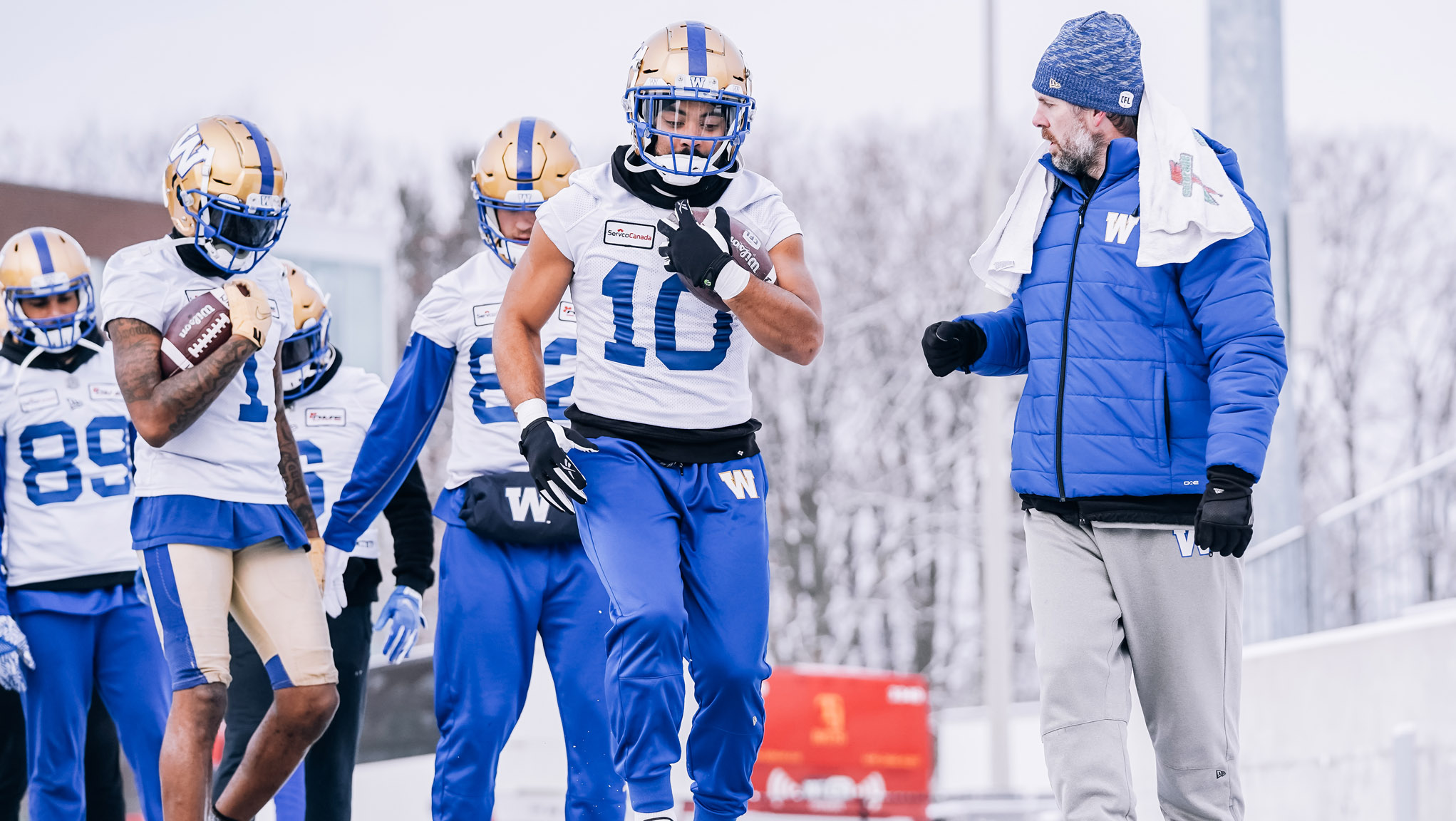 Nic Demski had 48 catches for 654 yards and four touchdowns in the Bombers’ quest to defend their 2019 Grey Cup championship (BlueBombers.com)

Demski, the 27-year-old Winnipeg native who attended the same high school as running back Andrew Harris, had 48 catches for 654 yards and four touchdowns, while Rasheed Bailey had 52 catches for 629 yards and five touchdowns.

Injuries limited Darvin Adams to 26 catches for 441 yards and four touchdowns, but he averaged a league-high 17 yards a catch. Drew Wolitarsky contributed 32 catches for 386 yards and one touchdown.

Demski said the skill among the receivers is matched only by their harmony on and off the field.

“We have a lot of talent, but I think the thing that stands out the most is just our relationships with one another,” he said. “We want to run routes to get another person open. We want to block for each other. We all want to be on the same page.

“We can all do a lot of different little things that really helps one another go out there and do our thing.”

Lawler, who also was named a West All-Star, said the Winnipeg receivers are more interested in the final score than reading the statistics after a game.

“We have all types of cats out there,” said the 27-year-old from Pomona, CA. “We’ve got dudes that really love each other.

Wolitarsky said there’s a difference between having teammates and playing with people you consider friends.

“You don’t always get to play with your friends,” he said. “We hang out with each other, we talk smack to each other. It’s awesome.”

Demski was involved in a play in last week’s 21-17 win over the Saskatchewan Roughriders in the Western Final that could have been a backbreaker.

On the game’s first possession he was open in the end zone but a pass from quarterback Zach Collaros bounced off his hands and was grabbed by Riders’ defensive back Ed Gainey.

Instead of sulking, the play lit a fire in Demski.

“If I would have let that piss me off I don’t think I would have played the way I did for the rest of the game,” he said. “It motivated me to be better not only for myself but mainly for my teammates.”

Demski rebounded to make six catches for 51 yards and carried the ball three times for 22 yards.

“I know my teammates rely on me to go out there and make plays,” he said. “It probably made me more mad the day after when I watched the game film that it did at the moment.

“I just couldn’t let that characterize the rest of my game. I just had to grow from it, learn from it and keep making plays for my team.”

Demski also contributed to Winnipeg’s Grey Cup win over Hamilton. He had four catches for 45 yards and rushed once for 22 yards.

The Bombers won the only meeting between the clubs this year, defeating the Tiger-Cats 19-6 in the season opening game Aug. 5.

The Bombers won four Grey Cups between 1958 and 1962, ironically all against Hamilton.

As much as he wants to be part of franchise history, Demski is focused on the process for Sunday, not the final result.

“I like to look at it as just another football game,” he said. “I don’t really like to get my emotions into it too much.

“I just have to keep my focus right and go in there with a winning attitude and take care of business.”