It’s been over two years since the confetti swirled around the Winnipeg Blue Bombers as they hoisted the Grey Cup on a clear, cool night in Calgary.

Just a few months later a virus would sweep around the world, causing deaths, forcing lockdowns and introducing concepts like mask wearing and social distancing.

While North America dealt with the new normal imposed by COVID-19, old wounds were torn open. The police killing of George Floyd in May 2020 in Minneapolis, plus several law enforcement shootings in Canada, shone a spotlight on the treatment of minorities.

The discovery this summer of hundreds of graves on the grounds of former residential school sites made Canadians face a painful chapter of this country’s history and reflect on the challenge of reconciliation with Indigenous people.

Over the last two years professional athletes have voiced support for Black Lives Matter and Every Child Matters. Society has taken steps to rectify years of racism and prejudice.

As CFL fans across the country prepare to enjoy the first Grey Cup in two years — the 2020 season was cancelled due to COVID — members of both the Blue Bombers and Hamilton Tiger-Cats spoke about what progress they have seen in combatting racism and the work that still needs to be done.

“I think people became more aware of the different problems and different situations that minorities and groups of people have to deal with on an everyday basis,” said Hamilton linebacker Jovan Santos-Knox. “The first step of making some type of change is just getting the general awareness that there’s a problem and how can we do things to counteract that or how can we help.”

Richie Hall, Winnipeg’s defensive coordinator, said as a Black man he always believed he’s had to work harder to prove himself.

“I don’t know how much significant change that we’ve seen but I think we have started the process,” said Hall. “I just hope that process doesn’t fizzle out and die.”

As a teenager, Winnipeg safety Brandon Alexander was pulled over in Orlando, Fla., while driving his father’s car and forced to stand with his hands on the trunk while police searched for weapons.

“You can turn a blind eye but in the grand scheme of things I think it’s being talked about at least.”

Hamilton linebacker Simoni Lawrence remembers having a cross burnt on the lawn of his house after his family moved to a predominately white suburban neighborhood in Philadelphia.

“That left scars, I had nightmares,” said Lawrence. “It doesn’t make me hate all white people. I understand for every 50 great people there are 50 bad people. You try to be on the right side of people.”

The residential school issue is personal for Hamilton quarterback Dane Evans, a Native American of the Wichita Tribe. His great grandmother Doris Jean Lamar-McLemore was taken from her home and sent to a residential school.

“They tried not to let her speak her language,” said Evans. “The powerful woman that she was, she persevered. When she passed away in 2016, she was the last fluent speaker of our tribe. So, when she passed our language passed as well.”

Evans supports athletes speaking out against racism and prejudice, even if it means writing messages on their cleats or posting on social media.

“I like the fact that people are now seeing you’re standing for something,” he said. “I think that is helping these issues.

“I’m not a politician or anything but I think if all do our part, however small it is, it can add up in the long run and hopefully changes some things.” 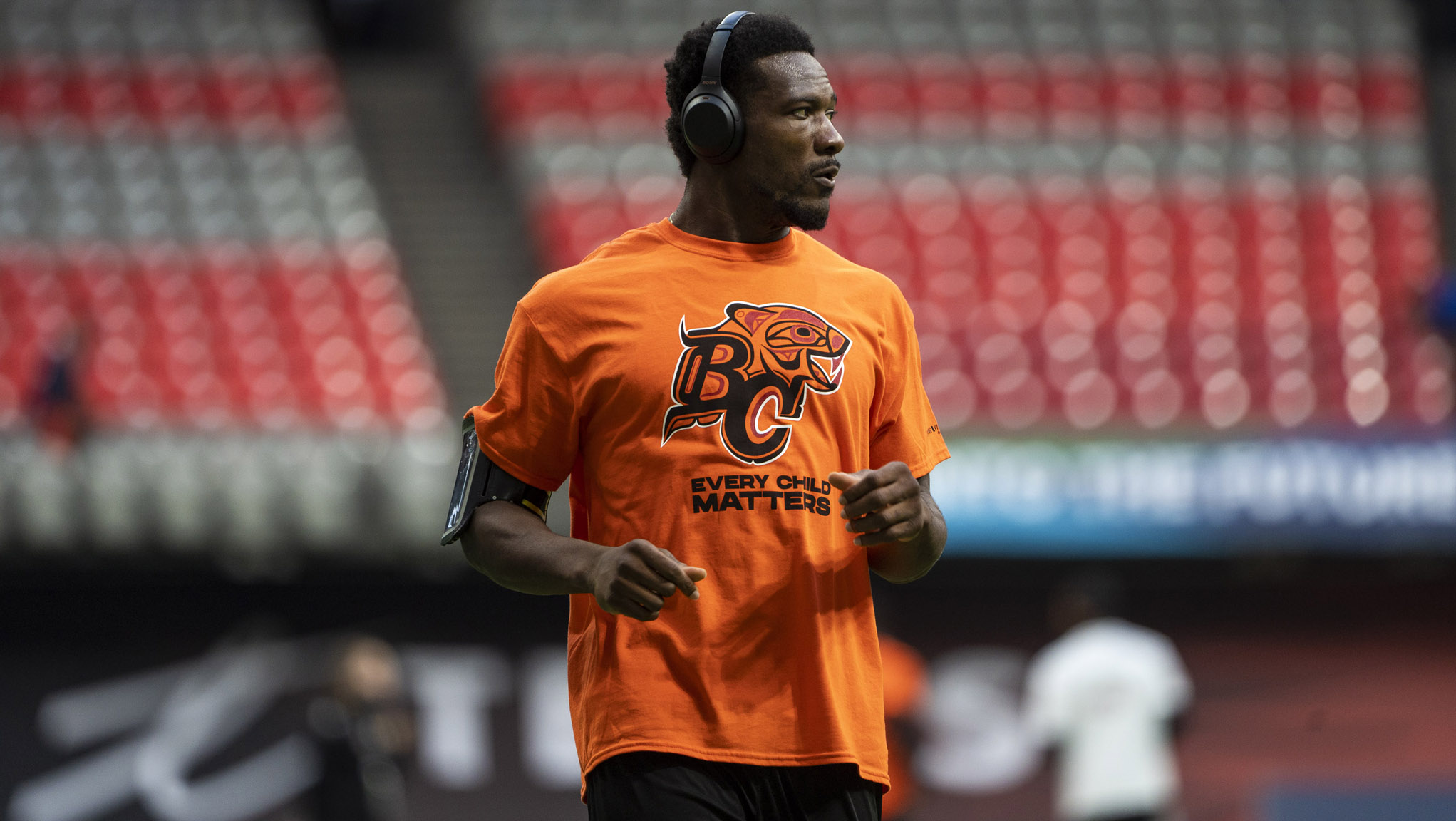 BC Lions linebacker and 2021 Most Outstanding Canadian Bo Lokombo warms up in a Lions’ Every Child Matters t-shirts ahead of the team recognizing National Day Truth and Reconciliation in September (Jimmy Jeong/CFL.ca)

The CFL remembered the children and families victimized by Canada’s residential school system during the opening games of the season. Teams also made acknowledgements for the National Day for Truth and Reconciliation.

“I think for the CFL that was a great step,” said Santos-Knox. “We had an Orange Shirt day. I thought that was great.”

Some critics say sports and politics shouldn’t mix.  An athlete’s role is to play their sport, not voice their opinion on issues.

“I understand, they have every right to say that,” said Evans. “But I’m also a person and I still have beliefs. I’m not going to go to your accounting job and tell you to shut up.

“If we have this platform, you can’t really knock somebody for trying to change the world.”

Hall said sport brings together people from all kinds of background.

“I hope sports continues to be the spearhead as far as trying to have a major impact on society in a different kind of way learning how we can better get along,” he said.

Hall agrees too much noise can cause people to turn a deaf ear.

Winnipeg running back Brady Oliveira believes social media is a platform that can help raise awareness of social justice issues.

“People nowadays are more aware,” said Oliveira, who uses his social media platform to help rescue dogs. “Everything is out there for people to see and to gather information.

“It depends how you use it. I use it as a positive.”

Lawrence laughed about politicians who want to gag athletes.

“The politicians contact us as soon as they’re running for office,” he said.

Athletes who speak out on social issues also have a responsibility.

“You have to be smart with it,” said Lawrence. “You have to gain the knowledge and you have to speak from your heart.

“I felt 2020 was just really a wake-up call. The best thing we can do for people is just to be kind, it’s the right thing to do.”