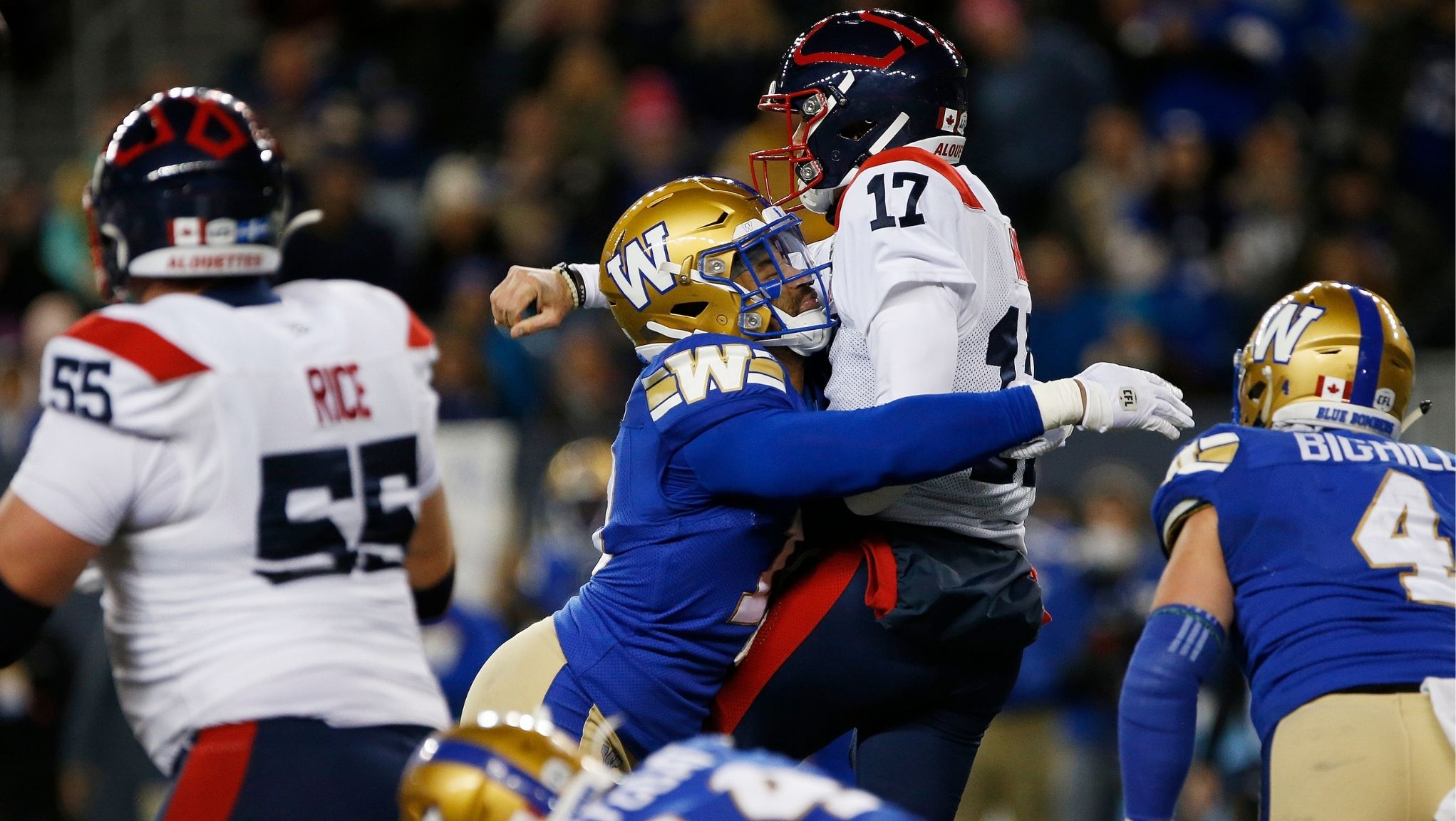 WINNIPEG —  Shutting out the Montreal Alouettes in the fourth quarter the Winnipeg Blue Bombers’ defence once again proved their dominance in their 31-21 win.

All season long, the Blue Bombers have been one of the most feared and stifling defensive units in the CFL when it comes to the fourth quarter.

Outscoring their opponents 106-6 in the fourth and not allowing a single touchdown during that time with three games to play, the Bombers once again reminded the league that nothing comes easy against them.  After the Alouettes opened up the second-half scoring with a first-drive touchdown, they were unable to repeat.

RELATED
» Bombers down Als for 9th straight win
» Through the Lens: Montreal at Winnipeg
» Boxscore: Als, Bombers by the numbers
» Watch: Als scoop and score ties things up early

“It comes down to guys knowing their assignments and playing fast,” said Adam Bighill to the media about the Bombers’ fourth-quarter performances. “We don’t have questions marks, everyone is seeing their targets and hitting their bullseye. You’ve got to play us all four quarters and don’t expect us to give you anything. Everything is going to be contested; I feel like we get better as the game goes on.”

For Bighill and the Bombers’ defence, he mentioned that a lot of their game plan was built around limiting Montreal’s ability to get anything on first down. That is exactly what the Bombers’ defence was able to do in the second half as the Alouettes accumulated only eight first downs in the third and fourth quarter.

“A lot of the key for us against Montreal was limiting first down,” said Bighill. “As the game progressed, we did that much more effectively.”

As for their ability to shake off the first half where Montreal was able to drive against the Bombers’ defence which led to 14 points, the explanation was simple for Jake Thomas.

“I think we just finally started playing our game,” said Thomas to the media. “I think early on, especially as a D-line, we weren’t getting vertical, we were playing pretty lateral. It just seemed like in the second half, we started getting that vertical pressure and things started to work well for us.”

While playing in close games is certainly something that’s not desired every game, Thomas believes that the wire-to-wire competition the Alouettes posed to them can only bring about positives.

In attempting to diagnose what arises in his team during the fourth quarter, Mike O’Shea was unable to pinpoint exactly what is behind their late-game performances.

“I can’t explain it,” said O’Shea post-game. “There’s definitely an energy. The level of execution was pretty high around that time. I don’t know how to explain it, definitely want it for four quarters not the fourth.”

Winnipeg’s 10-point win margin ties the closest they have been played since their Week 11 26-16 win over the Edmonton Elks. Having it been so long since the Bombers have seen a level of adversity that was displayed on Saturday, O’Shea felt good about the challenge.

“Because we won, I guess don’t mind it,” said O’Shea. “It’s certainly a little more adversity and a little different kind of feel to it. Having to go out and gut one out there in the second half is maybe a position we haven’t really been in in a little while. Certainly good to learn from this.”

The Blue Bombers and the Alouettes will meet again next week for the rematch at Percival Molson Memorial Stadium for a 1:00 p.m. ET kickoff.