The sources for inspiration and motivation are everywhere for our digestion. They have become clichés now – plastered on posters, featured as the core messages in advertising and pop up all over television and social media.

‘When life gives you lemons, you make lemonade… When you get knocked down, get up and fight harder… Adversity does not build character, it reveals it.’

But what if you have been handed more than your share of lemons over the years? What if your life has featured countless knock downs and one adverse situation after another? And how do you say inspired and motivated through a series of calamities that would bring most to their knees?

Winnipeg Blue Bombers defensive back hopeful Malik Boynton has been there, and there’s little doubt he’s been occasionally tempted to throw up the white flag in surrender during his 24 years on this planet.

Consider the following: There was the experience of his mother dying of cancer when he was 15, to then having his father lose his job, forcing the family to lose their home and live out of their van for a spell, then moving into his aunt’s house before she fell to cancer. Incredibly, their house then burned to the ground. Boynton then lived with his high-school basketball coach, often crashing on the couches of teammates.

Lemons into lemonade, you say? 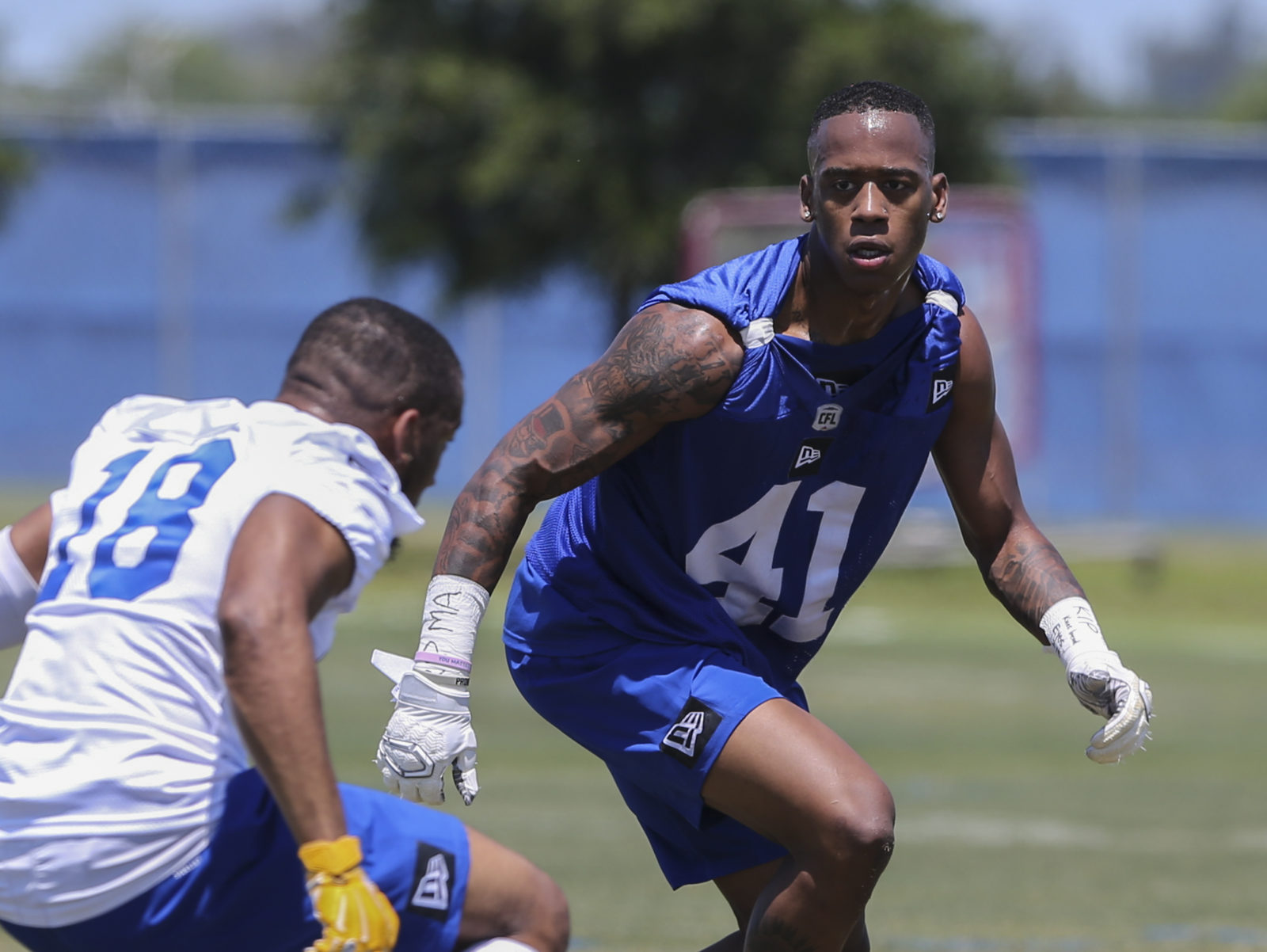 Boynton signed with the Bombers in January of 2020 (BlueBombers.com)

How about Boynton being in his freshman year at Austin Peay State playing football and suddenly dealing with the news that his younger brother, Kippriol, had been arrested for armed robbery and is still serving a term that could have him in prison for up to 20 years?

Or, during Boynton’s junior season, suffering a spinal concussion that left him paralyzed from the neck down for 20 minutes? A man’s future in football just doesn’t flash before his eyes in those moments, his whole life does.

He’s been cut by the Pittsburgh Steelers and by the Memphis Express while playing in the Alliance of American Football, which shut down before finishing its first year of existence. He was also among the final cuts of the Bombers last season, only to watch the squad end a 28-year championship drought a few months later.

Given a second chance – the Bombers signed him again this past January as a candidate to fill the holes left by the departures of Winston Rose and Marcus Sayles – he’s now had that opportunity delayed by a global pandemic.

“I appreciate every step I’ve taken in my journey, even the disappointments and the times I’ve come up short,” began Boynton in a chat with bluebombers.com this week. “I appreciate it because it’s taught me so much, not just about football, but about life.

“I’ve also learned a lot about myself. I found out I am strong enough to discipline myself, to pick myself back up from a low and defeated mindset. It also showed me that the people around me, my support system, care for me a lot. It’s my girlfriend and her family, my family, the kids I coach… everyone.

“Now when I get the chance to go up to Winnipeg it won’t feel like I’m going up there alone.”

Boynton is currently camped out in Eugene, Ore. with his girlfriend. He had been coaching 7v7 football with MVP Performance before that season was cut short by the pandemic and continues to train with former Oregon Ducks receiver Lavasier Tuinei.

Can you workout like Malik Boynton? All you need is a little space to run! #ForTheW #WorkoutWednesdays pic.twitter.com/wkz7S2utnE

He’s served as a coach and a personal trainer, filled in as a substitute teacher and cut hair to make ends meet – all the while still chasing his dream of pro football and his second shot with the Bombers.

“It’s been tough, but this process just taught me to be patient. Control what you can control and live in the moment,” Boynton explained. “I’ve been appreciating the time I have with my family and I’ve just been focused on doing what I can to try and get better so that I come to camp with the best chance of making the team.”

Boynton has leaned on his faith, especially lately, but won’t let what has happened in the past scar him emotionally. Oh, those moments have hurt him all right, but he won’t let them serve as roadblocks.

“After (the Bombers) released me last year I never heard anything for a while,” he said. “It was really depressing. I felt like I did enough to make the team. But then as the process went on it transformed my mentality – enough is never enough. I’ll never leave it up to chance again.

“I was thankful to get a shot at making the team. But what I took from it is I had a lot of work to do in the offseason. I had to work even harder to not leave it to chance; I needed to take that next step and not make the good play, but consistently make the great play. That’s what it will take for me to make the team because there’s great competition in the DB room, like always.

“I’ve been working out 2-3 times a day,” added Boynton. “I’ve erased all of my social media so I can focus and be ready. Now, it’s one thing to be on the phone with you and say this, but I’ve definitely got to go out and prove it.”

Boynton’s story, as gut-wrenching as it is, isn’t necessarily unique to the Bombers locker room. Jermarcus Hardrick has been there, challenging facing moments of adversity. So, too, have Andrew Harris, Rasheed Bailey, Adam Bighill and Brandon Alexander, among others.

Ultimately, they are all driven to succeed, to work, to keep chasing. Count Boynton among them. His hope now is he can crank up his desire soon, rather than have to wait until 2021.

“I just want a different outcome than what I’ve been used to seeing,” Boynton said. “I want to see what happens when you keep pushing, when you put your trust in something bigger than yourself and you keep working and you keep dreaming the whole time.

“I don’t want to be that person that walks around talking about what could’ve been. I’m going to put my neck out there and even if I come up short I know the only option after that for me is to keep pushing.”