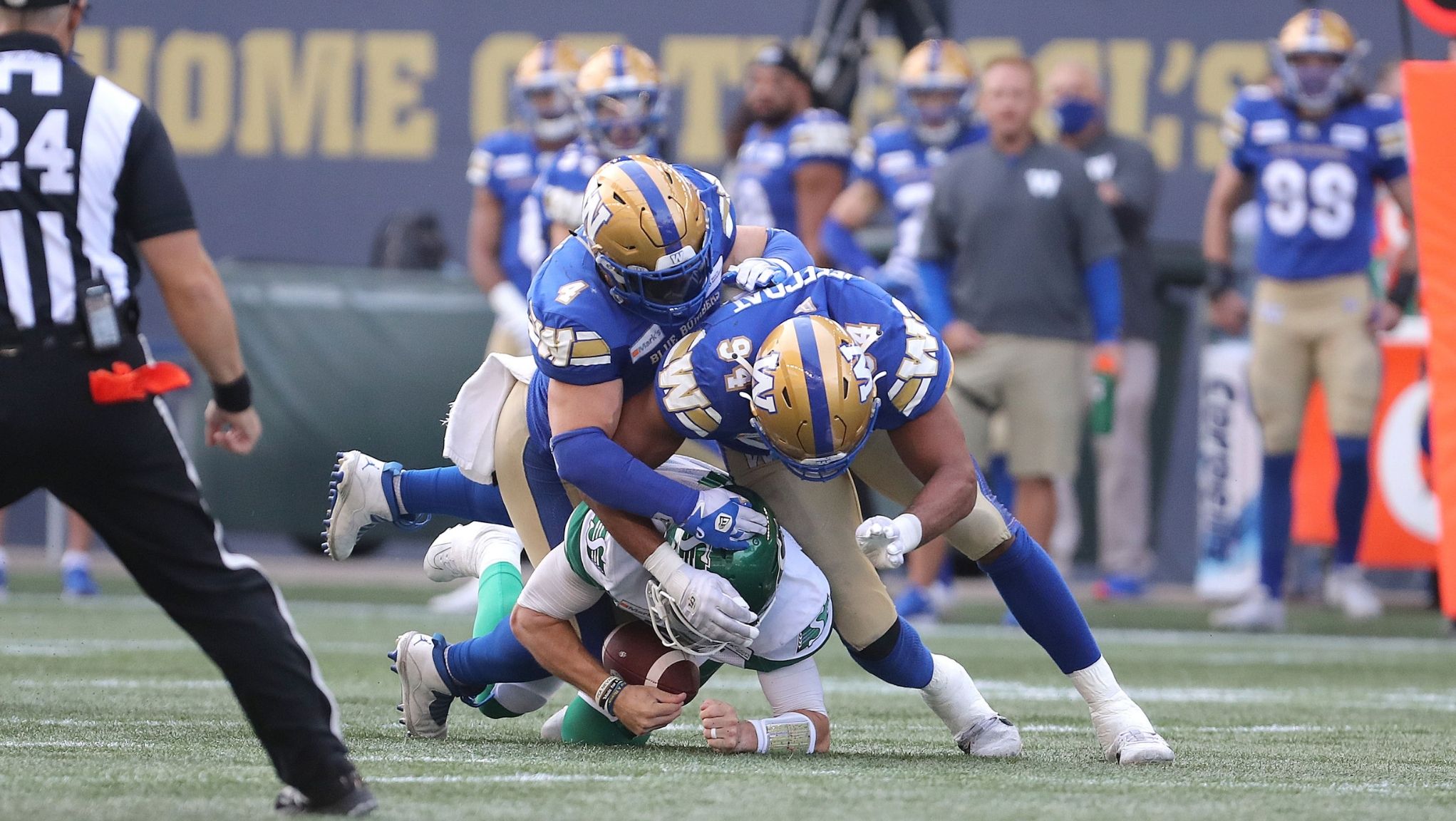 WINNIPEG —  Having held the Saskatchewan Roughriders’ offence to less than 10 points in back-to-back games, the Winnipeg Blue Bombers are becoming known for their game-wrecking defence.

Entering the Mark’s Labor Day Weekend, the Roughriders were seen as one of, if not the most potent offensive teams in the league. Led by Cody Fajardo, the weapons of William Powell, Shaq Evans, Kyran Moore and  Williams Jordan-Lambert to name a few had the Riders’ offence looking unstoppable through the first weeks of the season. Having been undefeated going into the Labour Day Classic, it remained to be seen if and how the Blue Bombers’ defence would be able to handle the Riders’ high-flying offence.

RELATED
» Bombers defeat Riders for second-straight Bajo Bowl title
» Boxscore: Riders at Bombers by the numbers
» Through the Lens: Saskatchewan at Winnipeg
» Watch: Collaros airs it out to Adams

In two appearances now against the Bombers’ defence, Fajardo and Co. were held to under 600 passing yards in two games all while recording four interceptions and being forced to lean on the foot of Brett Lauther for field goals. With performances like that Willie Jefferson believes that their brand of “Winnipeg Football” isn’t going to get any easier to play against.

“Hardnose, grind football, period,” Jefferson told the media bout the identity they’re forging. “We’re going to come to work every day, give you what you want: offence, defence, special teams. And we’re going to make you play your A-game. If you don’t come with your A-game, you’re going to be in for a long day.”

Sitting now with a record of 5-1 and four points in hand between them and the Riders for first in the West Divison, Jefferson sees the sky as the limit for the Bombers’ D.

“We’re still on the rise,” said Jefferson. “We left some things out there, offence-wise, defence-wise, special teams-wise, we didn’t show a lot of stuff…we still coming, we still have room to grow.”

At the centre of the Bombers’ defence is third-year Bomber linebacker Adam Bighill who believes the experience the Bombers have on their roster has played a vital role in their performances so far.

“Being a veteran group we have the ability to adjust really well,” Bighill told the media. “Depending on what we’re seeing, how they want to attack us in the first half, we make adjustments. We have different kinds of checks we come out with and we’re able to play things differently and tailor it to what they’re trying to do. We have a great group that’s smart enough to go ahead and do that.”

On the other side of the ball, Zach Collaros told the media how the performance of his defence can benefit the way the offence runs.

“You play complementary football and feel the ebbs and flows of the game,” said Collaros. “It’s nice to be up 10 points during the fourth quarter knowing they have to score two touchdowns to beat us and it’s hard to do against our defence.  It’s definitely a feeling of comfort I guess.”

The Bombers’ defence will have another opportunity to shine as they take on Trevor Harris, James Wilder Jr. and the Edmonton Elks offence next Friday at 9:45 p.m. ET.