When Micah Awe was growing up, football was a secondary concern for him. His parents wanted him to focus on his academics.

“I almost didn’t become a football player,” he said. “In my junior year of high school, my linebackers coach told me that I needed to go to camps. And in that moment, I was like, ‘Yeah, but my parents don’t really care about football that much.’

He went to the Nike SPARQ combine and wound up jumping the second-highest vertical of anyone at his position, and the rest was history.

Texas Tech offered him a scholarship, and while they were the only school to do so, he just needed one program to believe in his abilities.

His parents encouraged him to go into a major that was going to give him a future job, regardless of how football panned out for him. He decided to go into the petroleum engineering program at Texas Tech, which proved to have its share of challenges off the bat, as Awe tried to balance school work and being a full-time student-athlete.

“At one point , one of my college coaches was basically telling me to consider not doing engineering,” Awe said. “I was failing every single class that term, but I ended up finishing with A’s and B’s. But it definitely was not easy.

“The normal day was waking up at 5:00 a.m. for a 6:00 workout. From six to eight, you’d do a full college workout, which is extremely tough. I’d run in and grab some breakfast on the way to class, have class from 8:30 a.m. to 3:00 p.m. and then run to practice from 3:30 to 6:30 and then the rest of the nught, you do homework and then rinse and repeat. The best days were game days, because I didn’t have any homework to do, all I had to do was play the game.”

Right after graduating from Texas Tech, the NFL came calling, as Awe signed with the Tampa Bay Buccaneers following their minicamp in 2016. He didn’t make the 53-man roster, and after workouts with the New York Jets and Jacksonville Jaguars didn’t yield any results, Awe was left surveying his options.

His agent had mentioned that a few CFL teams expressed interest in him, and he started looking into possibilities up north.

BC Lions head coach Wally Buono wanted Awe to join the squad ahead of the 2017 campaign, something that the 26-year-old considered an honour.

In his first CFL campaign, Awe proved to be a key contributor in multiple phases of the game, as he finished with 54 tackles, 16 special teams tackles and a forced fumble while appearing in all 18 games.

That off-season, Awe was able to work as a research assistant for the Illinois State Geological Survey, which works on a number of important studies regarding earth science information to help with factors like environmental quality and public safety.

Awe drove two-and-a-half hours each way every day to work on some important projects.

“I was able to work on projects that they had been doing, but it was really like my job to improve it,” Awe said. “So I was able to lead and kind of be like a supervisor to the young students who worked there as well. It was a really cool experience, and I definitely explored Illinois weather — ice and snow. Everything up north was very different.”

On top of being on the road for so long every day to do critical work for the state, Awe was also trying to balance being a professional athlete.

He had to prepare for the upcoming season, and to do that, he had to continue to work out on top of working full-time.

“I had to be very smart with my time, like in college,” Awe said. “I started in November or December, which was right after the season, so workouts weren’t as rampant. But I planned out the job so that as it got closer to the season, that’s when I’d stop working and really ramp up my training.

“It was really tough. Some days, I couldn’t work out because I was driving in the car for five hours. I’m thankful that my body is athletic and I’m able to get work in. If anything, it just gave my body rest after a long season.”

During the lead up to 2018, BC also released Awe so that he could pursue NFL opportunities. He signed with the Jets but was released in April and returned to the Leos in August.

He was able to play in seven games for BC down the stretch, and despite an injury, he did return to play in Buono’s final regular-season game. He wasn’t at 100 percent, though, and was ruled out for the team’s Eastern Semi-Final game against Hamilton.

Last off-season, Awe went through the process of free agency for the first time in the CFL. After talking it over with a few teams, a chat with Toronto Argonauts head coach Corey Chamblin and general manager Jim Popp swayed the talented linebacker to join the Double Blue.

Through the first 10 games of his 2019 season, Awe was well on his way to setting new career-highs. He had 40 tackles, six special teams tackles, one sack, one interception and a forced fumble heading into Labour Day against Hamilton.

He had four tackles in Week 12, however, he suffered a pectoral injury that would end his season. He’d be forced to watch the final half of the year from the sidelines.

“When you don’t play, it does a couple things to you as a player, but I think one of the main things is that people lose touch and lose appreciation,” Awe said. “It was actually really motivating because this is something that has already happened a couple of times in my career. I thought that was one of the best games I had, and to not finish it and not see out the rest of the season, it hurt.

“It’s one of those things where I’m going to take that hurt and use it like Michael Jordan does. I see rankings all the time come out, and when you’re hurt, people forget about you, which is fine. That’s part of the game. But it’s also motivation to work even harder to prove people wrong.”

Heading into this off-season, Awe had interest from a couple of teams, and he received even more once some team’s plans fell through with other individuals. One team that stuck out was the Winnipeg Blue Bombers, who were pursuing him the year prior in free agency.

The defending champions offered a lot in terms of opportunity for him, but the biggest factor was the team environment, which former Argos teammates Ian Wild and Kevin Fogg said was top notch.

While Awe has become accustomed to being a starter, nothing is guaranteed in football, especially not with the Bombers’ talented linebacking corps. In the middle, there’s stalwart Adam Bighill, who’s still among the best MIKE linebackers and on-field leaders in the CFL. At the WILL spot, Kyrie Wilson is coming off a career-best year and will be pushing to keep his spot.

“For me, I grew up in Texas and played football in Texas, so competition has always been a part of me and I can’t run away from it,” Awe said. “Either you were good in high school and you started or you didn’t play — and even some of those guys got Division I offers because there was so much competition. 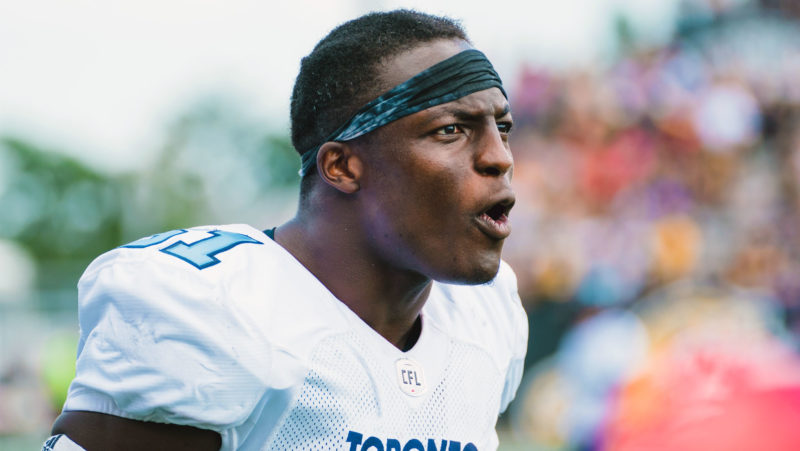 During his time away from the field this off-season, Awe has been hard at work developing an app called PurpleShift. The app is designed to allow athletes to go head to head with the rest of the world in different tests, such as the 40-yard dash, among other combine drills that football fans know well. There’s a live ranking system and it’ll allow for coaches and recruiters to get accurate times and measurables for players coming up through the ranks.

“The 40-yard dash is one of the most important numbers in the world for a football player. What I realized when I was training, my trainer at the time would use a stopwatch,” Awe said. “I’d run one time and get a particular time and then I’d run a different time. At Texas Tech pro day, we didn’t have lasers, we had all hand-timed. One person might have lasers and another might be hand-timed. So for me, I think there should just be one objective that everyone can agree on, so if you do run a 4.40, it’s legitimate.

“This app is basically going to get rid of the suggestiveness behind it and make it objective. Hopefully what happens is athlete A runs a 4.40, but he’s from a super small town somewhere in Ontario. Normally, a college coach wouldn’t ever go there because there’s just not enough money. But if you run that time and it’s verified on the app, then college coaches might invest the money into going down to meet that player in person.

“Sports should be objective. It should be about if someone is a better player or not, if he’s faster or not. It should just be straight up.”

He added that he hopes to be able to drop the app in the coming weeks and has dreams of one day having it featured at a combine.

There’s never been a question when it comes to Awe’s play on the field. He’s an absolute beast who’s able to fly to the football while being one of the hardest hitters in the entire league. But his drive to succeed outside the lines is what makes him so special.