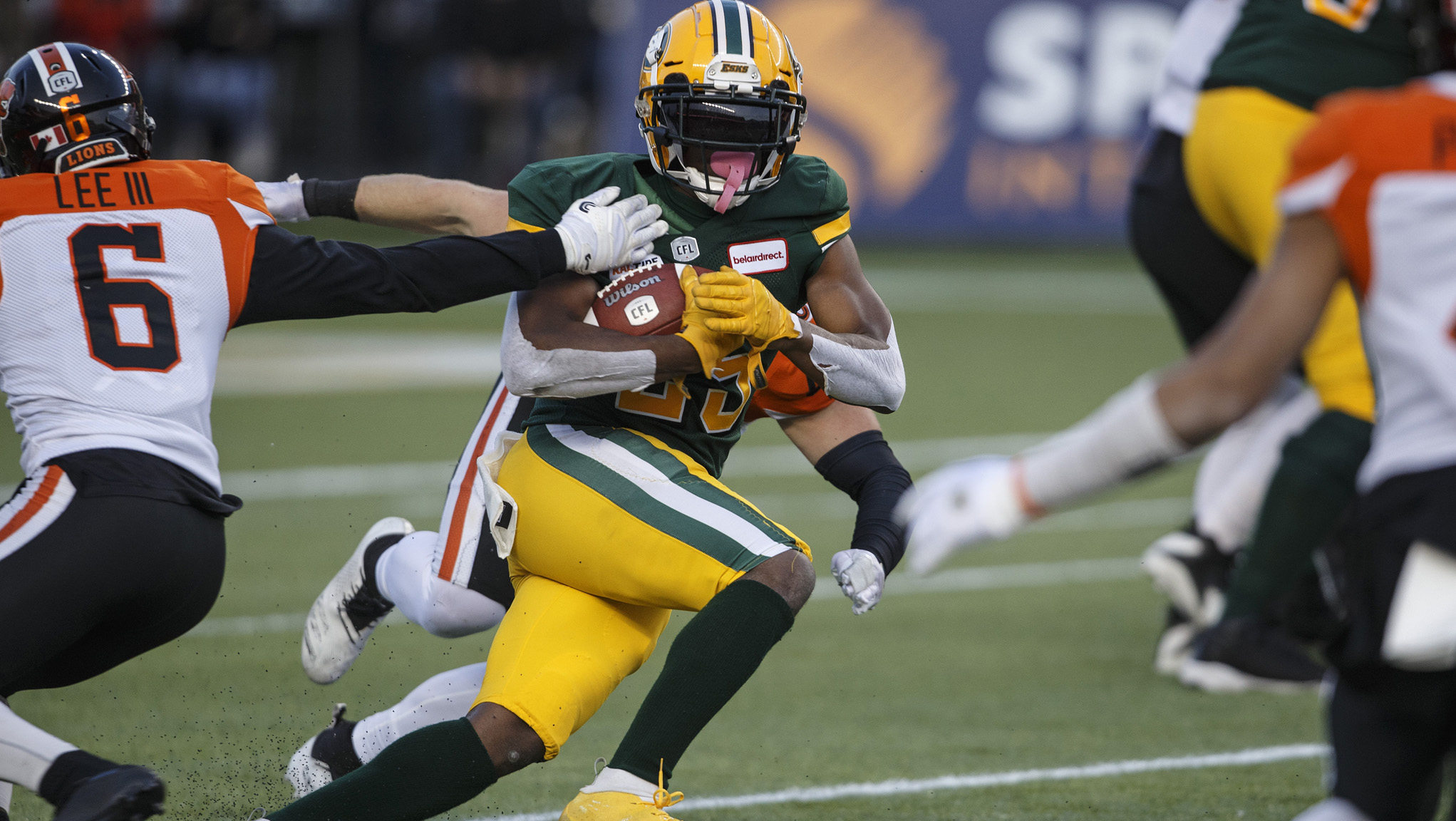 Shaq Cooper fared well in a backup role with Edmonton for the last two seasons. Two years later with the Lions, he’ll get his chance as a starting RB (Jason Franson/The Canadian Press)

After spending a couple years as an understudy in Edmonton, running back Shaq Cooper is anxious to take a starring role with the BC Lions.

The Lions are hoping Cooper taking centerstage will help boost an offence that struggled to score points in 2019 and had a middle-of-the-pack running game.

Cooper spent the last two seasons with the Elks, mostly as a backup to C.J. Gable. In seven games he rushed for 496 yards and two touchdowns on 90 carries. He also had 21 catches for 156 yards (136 of those coming after the catch) and a touchdown.

The time in Edmonton was a learning experience but now Cooper wants to step into the spotlight.

So far head coach Rick Campbell likes what Cooper has shown during training camp in Kamloops, BC.

“You can tell he’s got a spring in his step,” said Campbell. “I like hungry, motivated guys. You mix that with talent and good things can happen.

“He’s a guy that has proven he can play in this league. He wants to contribute on a regular basis. He’s fast, he’s a dynamic guy when you get the ball to him in the open field. In the CFL you need a few guys that can make an ordinary play into a real exciting play.”

RELATED
» This is the Remix: New look Lions’ defence has to produce
» New Kids on the Block: Lions confident in special teamers
» A QB Fortress of Solitude: Lions aim to protect Reilly in ’21

Cooper signed with the Lions on the first day of free agency in February.

“I want to bring speed and power,” he said. “I want to be the guy the coach can count on.”

Cooper is a compact five-foot-10 and 190 pounds. He can use his speed to streak through a hole or bulldoze his way to a first down.

“I want to be aggressive,” he said. “I’m not scared to lower my shoulder. “

BC offensive coordinator Jordan Maksymic spent four years on Edmonton’s coaching staff and knows what Cooper brings to the Lions.

“He’s a playmaker,” Maksymic said in an interview with the Lions’ website. “He’s such an explosive athlete.

“It’s going to be our job to find a bunch of ways to get the football in his hand.”

John White was BC’s starting running back in 2019. He ran for 1,0004 yards, leaving him fourth in the league in rushing. He also was BC’s first 1,000-yard rusher since Andrew Harris’ final season with the Lions in 2015.

White signed as a free agent with Toronto.

“At running back, we felt we needed to have someone with a little bit of experience there,” he said.

“Jordan had the confidence that Shaq Cooper would be a guy we would have an interest in. It was a good fit for us.”

Quarterback Michael Reilly said a threat at running back helps the passing game.

“The hardest thing to stop is when a team is balanced,” said Reilly, who threw for close to 3,900 yards and 20 touchdowns in 16 games in his first season back in BC in 2019. “You don’t know how they are trying to attack you.

“I think it’s important for us to be balanced. I think we have the ability to do that. Our offensive line is very well built for the running attack.”

Besides Cooper, the Lions also have veteran Chris Rainey, plus American rookies Reggie Corbin and James Butler in camp. The 33-year-old Rainey will likely be used mostly for punt and kick returns. 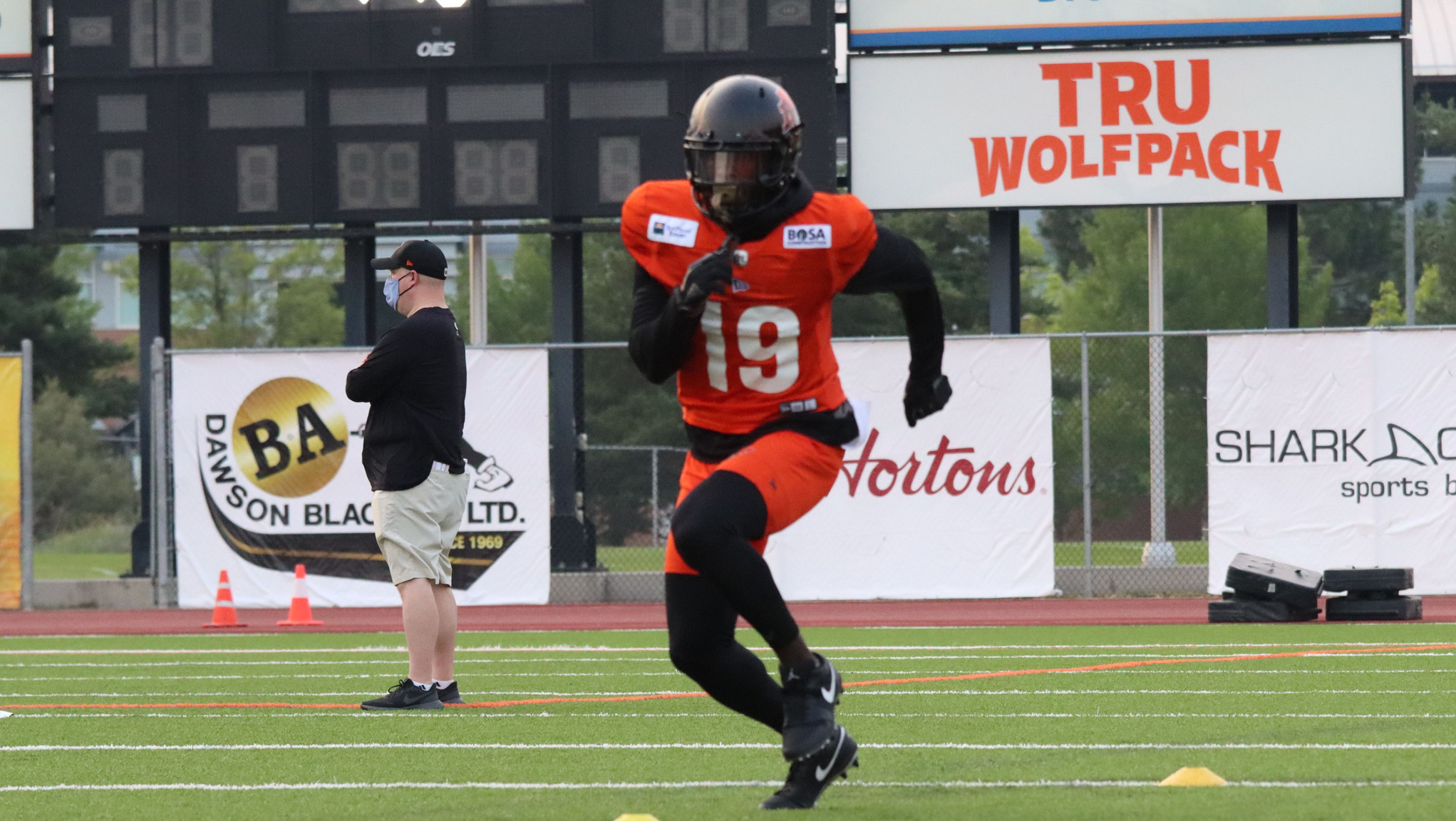 The Lions added a 1,000-yard receiver to the fold when they signed Dominique Rhymes. He should help take defensive attention away from star receiver Bryan Burnham this year (Photo: BCLions.com)

An already impressive BC receiving corps got even better with the addition of free-agent Dominique Rhymes, who had over 1,000 yards with Ottawa in 2019. He joins a group that includes Bryan Burnham, who led the team with 1,492 yards and 11 touchdowns, Jevon Cottoy, and Canadian Lemar Durant.

Putting together an offensive line to keep the 36-year-old Reilly healthy will be a key to any Lions’ success. BC allowed a league-high 58 sacks in 2019 but showed signs of improvement later in the season when Kelly Bates took over as offensive line coach.

Reilly is pleased to be working again with Maksymic. He was Edmonton’s quarterbacks’ coach when Reilly was named MOP in 2017.

“Anybody that has worked with him, he’s tireless in his work,” said Reilly. “The guy has a mind unlike anybody I’ve ever played or worked with.

“He’s going to make sure his play calling puts our offensive line and entire offence in a position to be successful.”

Cooper is also happy with be working with Maksymic again.

“He’s seen a lot of me,” he said. “He knows I work hard. Him trusting me and having faith in me means a lot.”

The Lions open the season on the road Aug. 6 in Saskatchewan and Aug. 12 in Calgary. Their first home game is Aug. 19 against Edmonton.

Cooper already has the game circled on his calendar.

“It’s going to mean a lot to play against them,” he said. “I get a chance to show them what I can do.”