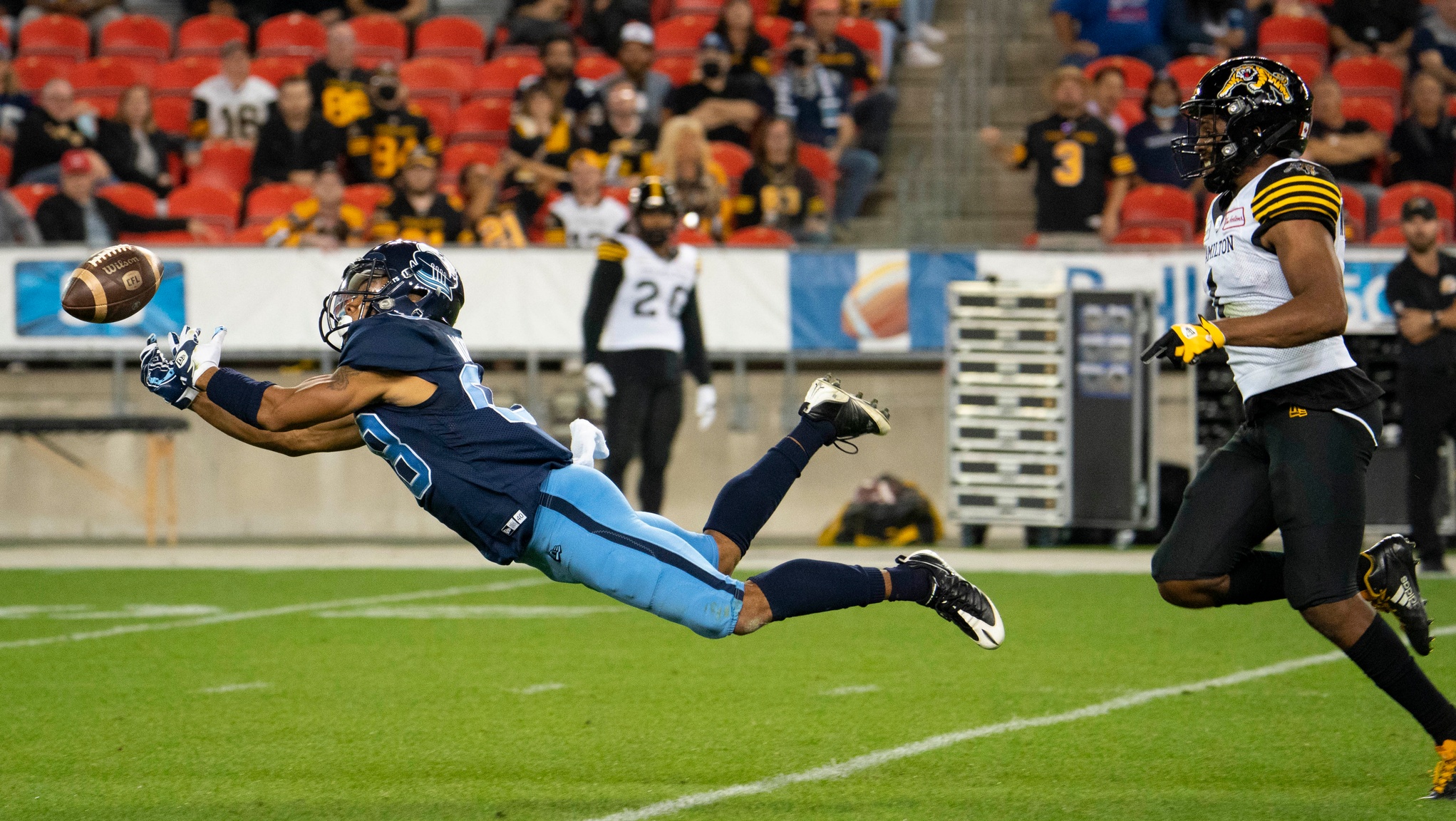 TORONTO —  It was tale of two halves for the Argos’ offence in Toronto’s 17-16 win over the rival Hamilton Tiger-Cats at BMO Field on Friday night and the team is now focused on fixing the offensive mistakes that paved the way for Hamilton to nearly complete a comeback in the final minutes.

While the Argos (3-2) managed to bounce back from last Monday’s 32-19 Mark’s Labour Day Weekend loss in Hamilton and move into first place in the East, the team is not satisfied after leaving points on the field and giving up a costly turnover late in the fourth quarter.

Powered by a strong defensive performance and a pair of first-half offensive touchdowns, the Argos managed to hold on thanks to a missed extra point by Michael Domagala with under two minutes left in the game.

“I think those guys know we left a lot on the field and we were pretty sloppy, so we’re not happy with that performance at all,” said head coach Ryan Dinwiddie.

Quarterback Nick Arbuckle completed 23 of 32 passes for 236 yards and a touchdown, but he also threw two interceptions and missed some opportunities to put the game out of reach. The second pick set the stage for the Ticats to nearly tie the game following a late touchdown run by Sean Thomas-Erlington.

“It feels like a loss almost for me,” Arbuckle said. “I mean that interception I threw at the end, that’s going to sit with me for the next 24 hours for sure. I’m just trying to throw the ball away there and I didn’t even get it to the sideline. Who does that? That’s a play that I’ve got to correct.”

Dinwiddie liked what he saw from his team early on with their strong first half, especially after dropping the first game against Hamilton just four days earlier. The team showed once again that it could bounce back directly after a loss after doing it for the second time this season.

“I think the guys are resilient. Guys were banged up, we were nowhere near 100 per cent going into this game. I’m sure they weren’t either, but those guys kept fighting and found a way to get physical the first half. We had some mistakes in the second half on both sides of the ball, but the defence was dominating,” Dinwiddie said.

“Offensively we’ve got to get a whole lot better.”

Despite the short turnaround, Arbuckle and the offence came out strong and had the Ticats on their heels following an incredible 40-yard touchdown by D.J. Foster.

“We showed we could move the ball, get first downs, make explosive plays happen in that first half. So there’s no excuse for me not to be able to continue that with our offence in the second half,” Arbuckle said.

Eli Harold and Shawn Oakman each registered a pair of big sacks for Toronto and Henoc Muamba‘s interception set up a short touchdown drive that put the team up 14-0.

Another bright spot for the Argos in Week 6 was their ability to establish a rushing attack, as running back John White ran for a game-high 84 yards on 12 carries — his highest rushing total since Week 2.

White sustained key drives and helped set up a 26-yard field goal by Boris Bede in the fourth quarter that ultimately ended up being the difference.

The Argos will look to claim their fourth win of the season when they travel to Saskatchewan to face the  Roughriders next Friday at 9:45 p.m. ET.