TORONTO —  Facing a familiar opponent in the Eastern Final, the Toronto Argonauts are preparing for everything the Hamilton Tiger-Cats may throw at them.

Over the course of the 2021 campaign, these no-love-lost QEW rivals have seen a lot of each other. Clashing a total of four times during the regular season, with the Argos coming out on top in three of those meetings, both teams know what each other is capable of.

All season long, the Ticats have been one of the most dominant teams on the defensive side of the ball. Allowing the fewest yards on the ground in the regular season (1,115) complemented by the fourth-fewest yards allowed in the air (3,489), the Ticats’ have been a defensive nightmare. If the regular-season was not a large enough sample size for them to prove their tenacity, they reminded the league what they’re capable of in the Eastern Semi-Final. There, they held the league-leading rusher, William Stanback, to 29 yards in their 23-12 win which was highlighted by six sacks.

RELATED
» Head to Head: Who has the edge in the Eastern Final?
» Hogan: Rogers returns at the perfect time
» Ten players to watch in the Divisional Finals
» O’Leary: Five storylines for the Eastern, Western Finals

Amid the success Hamilton has found this year, Toronto has had their number and been one of the few teams to have figured out the recipe to beat the Black and Gold: A healthy dose of their passing game.

Throughout their regular-season meetings, the Argos leaned on the talents of Nick Arbuckle — before his departure to Edmonton — and McLeod Bethel-Thompson. The two threw for a combined 1,192 yards and seven touchdowns against the Tabbies and were one of the many factors behind their wins.

With that, it might be easier said than done for the Argos to tally a fourth-straight win on Sunday. With no guarantees that history is to repeat itself, Argos head coach Ryan Dinwiddie acknowledged that the biggest challenge he’s facing ahead of Sunday is finding a different way to attack Hamilton.

“The hardest part is trying to do something new, attack them a different way,” Dinwiddie said to reporters in a Tuesday Zoom call.

“We played them so many times. We’ve had some games where we’ve had some wrinkles and some games, we’ve had some stuff from the week before that we ran against them. We’ve just got to find a way to reinvent the wheel a little, make sure we stick to our core concepts and make sure we’re not doing the same thing over and over that they’ve seen all year.”

Knowing that Hamilton is in the same situation as him, Dinwiddie is expecting the Ticats’ offence that put up 237 yards in the elements against Montreal to try and change things up a bit as well. 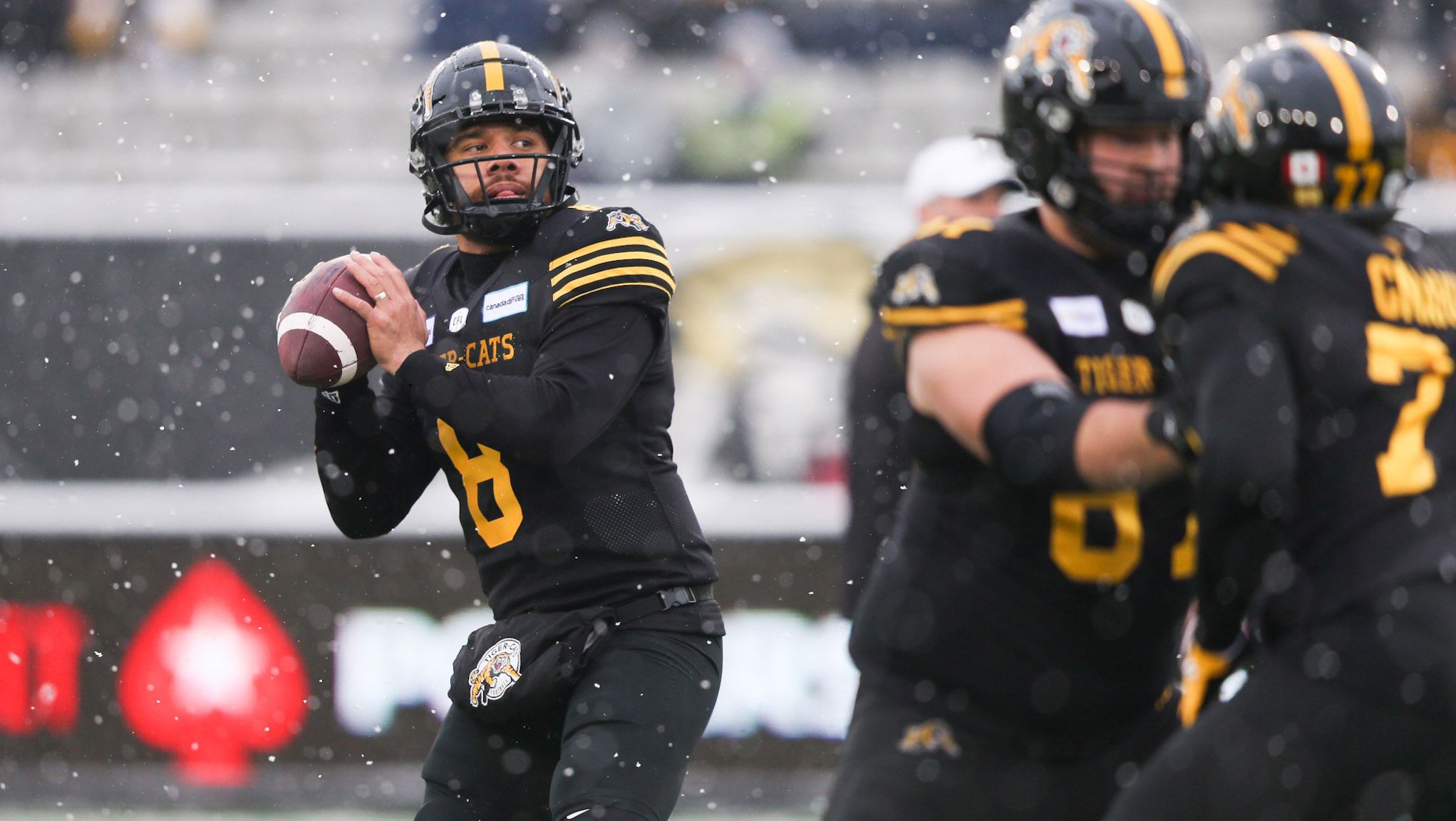 Jeremiah Masoli and the Ticats’ offence will be looking for the punch they were lacking in their Week 15 encounter with the Argos (Geoff Robins/CFL.ca)

“Tommy (Condell) does a great job on offence. He’s thrown some shots at us each week. The last time he had some guys open they just didn’t make the throw,” said Dinwiddie.

“We know they’re going to go back to those. I mean, you’ve got to make big plays in big games, you can’t just dink and dunk it all the way down the field, especially in this type of weather. They might have a reverse pass or something like that, I’m sure they might have had something they’ve been practising for five or six weeks, they’re just waiting for the right time to bring it out.”

As for the Ticat’s defence, Dinwiddie spoke highly of the men in the trenches and what that means for their game plan come kickoff.

“Their front seven’s been together the whole year so they’re playing really good football, they get after the passer, Ja’Gared Davis is a different player when it comes to big games, that’s when he really puts on his best showing. We’ve seen that the last few weeks,” said Dinwiddie.

“We’ve got our hands full. We’ve just got to keep them from getting after the passer too much. If we stay second-and-long throughout the game, it’s going to be a tough day.”

Looking in the rear-view mirror to their previous meeting, a one-sided 32-12 win, Dinwiddie is hoping to carry elements of that game over to Sunday, along with picking up his fourth win over the team’s longtime rival.

“I thought our last performance against them was the best,” he said. “We’ve got to build off of that and we have some new schemes to attack them in certain ways.”