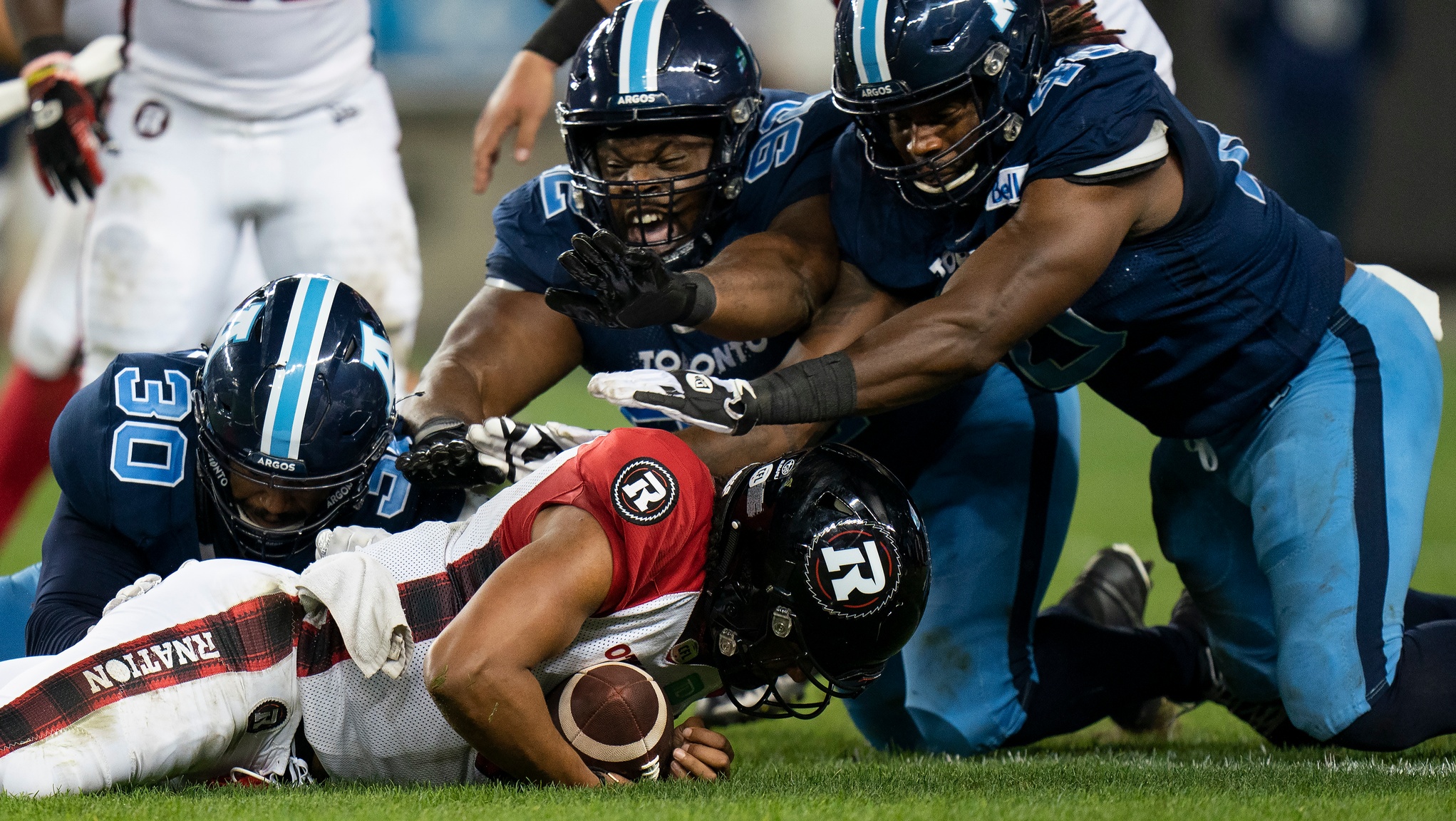 TORONTO — The division-leading Toronto Argonauts won their second straight game with a commanding 35-16 win over the Ottawa REDBLACKS on Wednesday night, but it was powered by strong defensive and special teams performances that made up for a lack of offensive output.

The Argos’ defence and special teams accounted for three of Toronto’s five touchdowns on the night, and they helped keep the game close until the offence could find its rhythm in the third quarter.

New defensive consultant Chris Jones has only been with the Argos (5-3) for two games, but the unit has recorded five interceptions in that span — two of which were returned for touchdowns against Ottawa.

It is the first time Toronto has had two pick-sixes in the same game since 2006.

“Defensively they’re practicing it and they’re trying to score all the time,” said head coach Ryan Dinwiddie. “That was big time for those guys to get the game and kind of put it out of reach when we weren’t doing our part (offensively).”

RELATED:
» Argos roll past REDBLACKS to remain perfect at home
» Through the lens: REDBLACKS at Argonauts
» Boxscore: Argos, REDBLACKS by the numbers
» Watch: Pellerin blocks punt for an Argos TD

While McLeod-Bethel Thompson had his second straight game with multiple touchdown passes, the offence finished with just 213 total yards and was unable to reach the end zone until the second half.

Dinwiddie gave a candid assessment of the offence after the game.

“It was one of the worst offensive performances I’ve seen. Those guys know it. I didn’t rip them at halftime, I just let them know where we’re at and what need to get better at,” Dinwiddie said.

“We’ve got to be a whole heck of a lot better than that, and there’s some guys that have got to get better or they’re not going to be here.”

D.J. Foster had the biggest offensive play for Toronto with a 63-yard touchdown on a screen pass that put the Argos on top in the third quarter, but Toronto’s longest play outside of Foster’s was a 25-yard pass to DaVaris Daniels.

Special teams picked up the slack early on when Dion Pellerin’s diving punt block led to a scoop-and-score by Dejon Brisset.

“Our special teams was phenomenal,” Dinwiddie said. “Those guys swarmed to the ball, flew around made some really good plays, and then the blocked punt was huge for Dion to get that done.”

The Argos’ defence took control of momentum for good when Dexter McCoil and Chris Edwards both returned interceptions for touchdowns in the third quarter.

“We’ve got some playmakers now and if they continue to do that each week we’re going to be a dangerous football team,” Dinwiddie said.

Toronto’s defence is now second in the league with 10 interceptions after two big weeks. Bethel-Thompson was quick to give praise to the unit following the win and noted how much of an impact they could have down the stretch.

“That’s the strength of our team for sure. That defence just flies around. They’re a bunch of violent individuals, and it’s really fun to watch. I think they’re gelling, I think they’re coming together,” Bethel-Thompson said.

“I think they’re only going to get better, which is scary for the offences that they’re going to face coming up.”

The Argos face a quick turnaround with another Week 10 matchup coming up on Thanksgiving Monday against the rival Hamilton Tiger-Cats (4-4). The teams have already faced each other twice this season, with Toronto winning in Week 3 and Hamilton winning in Week 5.

“It’s going to be a challenge,” Dinwiddie said. “They’re a damn good defence, damn good football team. But no excuse for the short week, we’ve got to find a way to get it done.”

Bethel-Thompson knows the offence will have to get things back on track right away if they are going to maintain control of the division, and he said Monday’s matchup is the team’s biggest game of the season so far.

“We want to make sure it’s a win and really establish ourselves in the East, but we’re going to have to play a lot better on Monday than we did today,” Bethel-Thompson said.