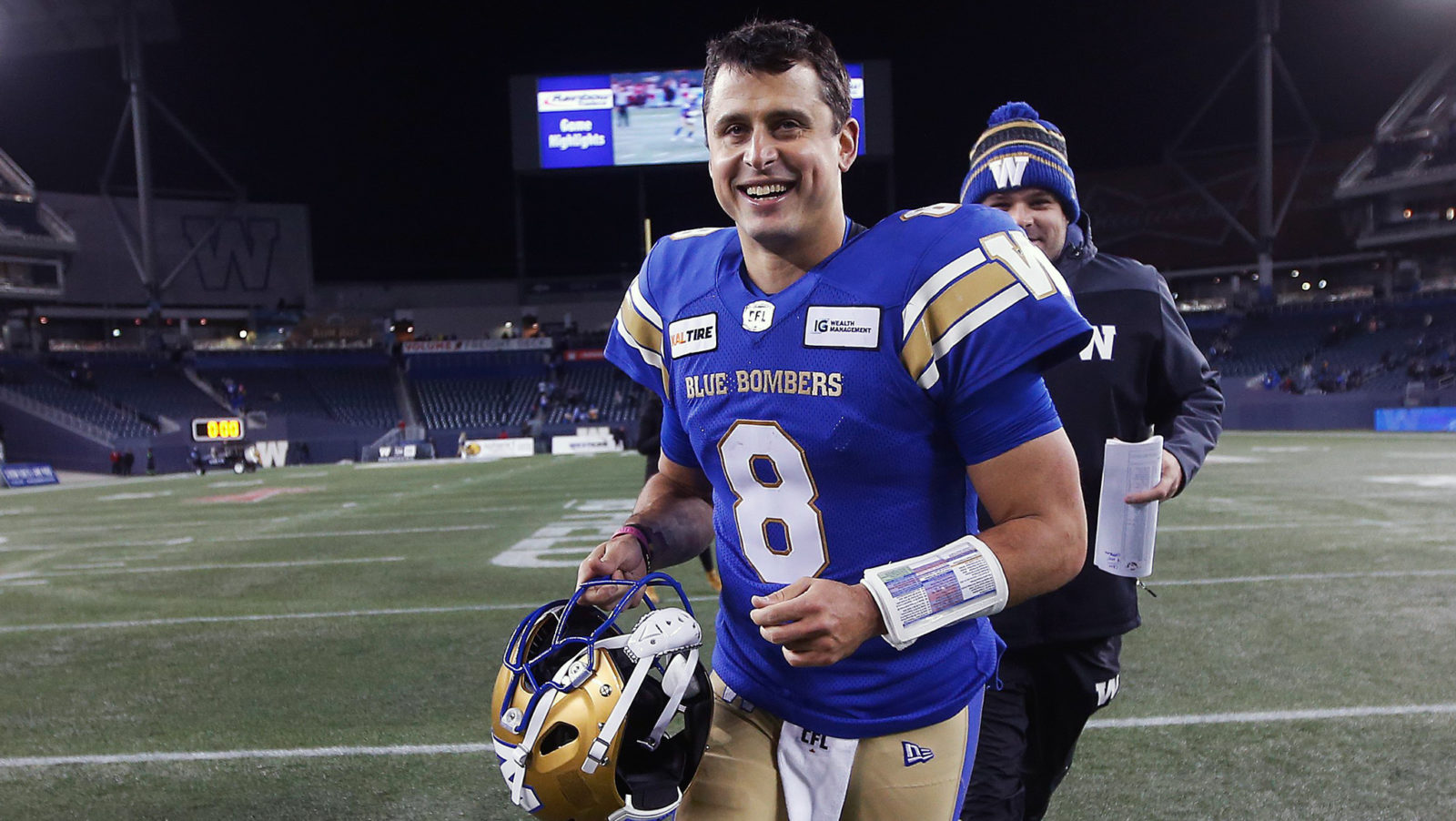 Editor’s Note: A similar version of this article originally appeared on June 4, 2020.

The one-year anniversary of Zach Collaros’ first game with the Winnipeg Blue Bombers – a game that included his incredible scramble out of the pocket to find Darvin Adams in the end zone – is coming up on Oct. 25.

Following that victory in the regular season finale, where Collaros made 22 of 28 passes for 221 yards and two touchdowns, Winnipeg would not lose a game for the rest of the year. It was a defining moment for Collaros, as the Bombers had complete faith in the pivot, and would eventually choose him as their starting QB moving forward.

The moment that would go down as one of the best plays of the 2019 season was near the end of the game and the Bombers were trailing. It appeared that they might drop their second in a row to Calgary.

Collaros had other plans, however.

The Bombers pivot scrambled out of the pocket and made something out of nothing, tossing a perfect pass to Darvin Adams, who incredibly kept his feet inbounds for the touchdown. That major scored began a 10-point swing that ended with a field goal to give the Bombers the first win of their eventual four-game winning streak that ended in a Grey Cup Championship.

If you take a look back at that play, you can see Collaros’ instincts to try and keep things alive, the accuracy of his throw and Adams’ catch to top it off. A key part of the success of that play, and one that sometimes gets overlooked, was the blocking from the offensive line to make sure that Collaros was able to work his magic.

Right guard Patrick Neufeld broke down the play over the phone from his home in Saskatoon back in June. Here’s his perspective on the incredible play:

“I’m not exactly sure what yard line we were on but we were close to the goal line. We always talk about getting six not three and we just knew that if we gave Zach enough time that he was going to make a play for us. Practice is always different for us because the whistle is blown dead if a guy gets too close to the quarterback or the play kinda just stalls. When it’s live, you just never know what’s going to happen. Calgary up front, they ran a defensive line twist and it kind of split down the middle. As an offensive line, we never know where Zach really is. We kind of have an idea of where he is based on where the the d-line is rushing. So when the d-line stops and they start retreating, you have an idea that okay, the quarterback is moving.

“I think at the time, Zach was trying to step up and someone fell into his rush lane so he literally just turned around and started running. At that point, as an offensive lineman, you’re like, ‘okay, what’s going on here? What can I do to try and salvage this play and make this play successful? I just remember turning around and chasing after Rose and he was kind of in pursuit of Zach and Zach’s running. It kind of started turning into a Madden football play where it was like he was controlled by a joystick. He’s running one way, he spins around and then I honestly thought that he was just getting rid of the ball, that he wasn’t going to make a bad play worse.

“Next thing I know, he’s throwing the ball into the end zone and there’s a group of people there and from my perspective at that time, I had no idea that Darv (Darvin Adams) was there, let alone that Darv’s got two feet in when he caught that ball. Then I looked over and the crowd was going crazy and then I see the referees hands go up and I was like, “wow, that was a touchdown pass.” And I was like, ‘this is Zach Collaros. This is the kind of guy we have back there.” No play is dead with Zach and he’s going to work his ass off to make sure that he’s going to make that play successful.”

“For us, it was one of those games that we really wanted to go into the playoffs on a good note,” said Neufeld. “Calgary, historically, has been such a good team especially at the end of the season. We knew how important this game was and this was also Zach’s first start for us. A lot of guys had known how good Zach was just based on his prior years in the CFL. At one point I think he was a MOP candidate and with the Riders the year before I think he was 10-4 as a starter so everyone knew how good of a player he was.

“Then when he came into our building and we saw how many hours he would be in there studying and watching film and taking everything in. On the practice field he was making some great throws and some throws we hadn’t seen in a while. We were all confident. Then come game time, it took a little while to get in there but it was a battle back and forth. We had some pretty great plays on defence, we had some pretty great returns in the special teams part of the game. Then Zach really showed what kind of quarterback he was and led us to victory.”