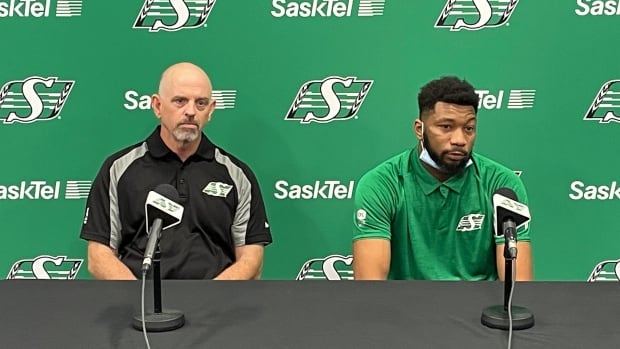 The Saskatchewan Roughriders say no charges have been laid against defensive back Loucheiz Purifoy following an incident at a Regina restaurant after Sunday’s West Division semifinal that led to a woman being charged with assault.

In a news conference Tuesday morning, Purifoy said he and a few other players went to eat at Earls that night. However, when his meal was taking too long, he got “hangry” and yelled at a waitress, he said.

From there, he said that police were called and he was detained overnight for “breaching the peace.” The next morning, Purifoy noted he was released without charges.

Coach Craig Dickenson says Purifoy will be disciplined internally, but wouldn’t comment on what that will look like — or whether the Riders safety will play in this coming weekend’s West Final against Winnipeg. <a href=”https://t.co/marNDK0y5d”>pic.twitter.com/marNDK0y5d</a>

Regina police have confirmed that officers were called to a restaurant in the 2600 block of 28th Avenue on Sunday around 10:30 p.m. CST.

When they arrived on scene, they took a statement from a 22-year-old employee who said she was struck in the face by a 31-year-old woman.

Police said the 31-year-old woman was subsequently arrested and charged with assault.

A man — who Purifoy has confirmed was him — was also taken into custody and released “once he was calm and sober,” police added.

Purifoy called the woman his “friend,” adding that he’s aware there was another incident that night but, at the time, he was more focused on getting his food.

“There was an altercation that was going on, [but] I was speaking to the manager,” he said. “I have no idea what was happening.”

Riders head coach Craig Dickenson said Purifoy will be disciplined internally for his actions but wouldn’t elaborate on what that will look like.

“We’re disappointed and embarrassed by it, but we also support him. He’s a member of this team and he’s a member of our family,” Dickenson said at Tuesday’s news conference. “We’re looking to address it today and then just move on.”

Dickenson wouldn’t confirm whether Purifoy will play in this upcoming weekend’s West Division final against the Winnipeg Blue Bombers.