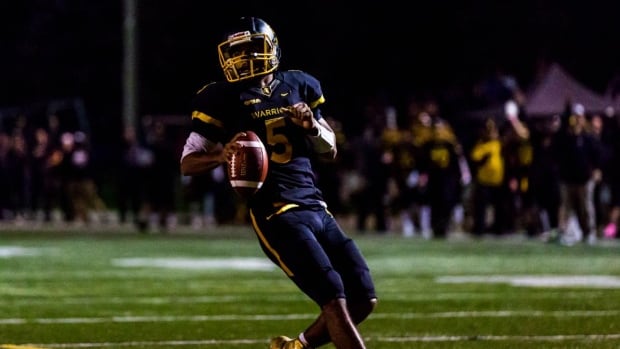 In his final year of eligibility, Ford became both the first Black QB and the first Warriors player to earn the honour of U Sports’ most outstanding football player.

“Tre is a trailblazer.”

The six-foot-two, 192-pound Ford finished the season in the top 10 of both passing and rushing across Canada. Through the air, the Niagara Falls, Ont., native completed 63.4 per cent of his passes for 1,465 yards and 10 touchdowns.

He also led U Sports with 10.7 yards per carry, totalling 629 yards on the ground to go with three scores for the 3-4 Warriors, who fell to Western in the Ontario University Athletics (OUA) quarter-finals.

Western meets Saskatchewan in the Vanier Cup on Saturday at 1 p.m. ET. Watch live coverage of the title game on CBCSports.ca, the CBC Sports app and CBC Gem.

Ford’s next stop could be the CFL, where he ranked ninth in the most recent Scouting Bureau prospect list. He previously won 2017 U Sports rookie of the year as well as taking a pair of OUA MVP trophies.

Elsewhere, Alberta’s Josiah Schakel was crowned top defensive player after leading Canada West in tackles, while Concordia slotback Jaylan Greaves was top rookie following a season in which he topped U Sports with 22.4 yards per catch.

Queen’s boss Steve Snyder won the Frank Tindall Trophy as coach of the year after the Gaels romped through the OUA East with a perfect record, allowing just 7.3 points per game and three total touchdowns in the process.