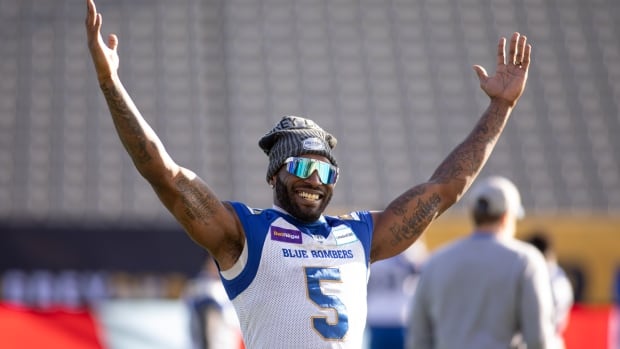 Familiarity shouldn’t be an issue for the Winnipeg Blue Bombers on Sunday.

The Bombers will attempt to secure a second straight CFL title when they face the Hamilton Tiger-Cats in the Grey Cup game. Winnipeg captured the 2019 title with a 33-12 victory over the Ticats.

A total of 31 players who were on Winnipeg’s 2019 Grey Cup roster played in its 21-17 West Division final win last weekend over the Saskatchewan Roughriders.

“You bring them back for these types of reasons,” Winnipeg head coach Mike O’Shea said Saturday. “These types of games because they know what they need personally and are also aware of what their teammates need.”

The Bombers held their final walkthrough Saturday, with the head coach happy with the state of his squad.

And he comes in sporting an unblemished 5-0 record.

But he wasn’t feel nostalgic Saturday.

“I don’t know why I would try to compare it to another time.”

“Besides being a great friend, he’s a great coach,” Steinauer said. “I was unaware of that but definitely not surprised.”

And while Steinauer and O’Shea are very close friends, Steinauer definitely wants the win Sunday.

“But the thing I respect about Osh is he works. I think we’re both looking forward to this competition.”

‘We probably both play the same brand’

Asked if he savoured moments more now, O’Shea said: “I think that’s a natural thing as a player standing back and watching other players was an important transition but I’m not a player anymore. I get to stand back and watch all these guys all the time.”

And O’Shea has a clear idea of what kind of game will transpire Sunday.

“Sixty minutes of tough football played in a great environment, Hamilton-style football,” he said. “We probably both play the same brand, good defence, offences that can get after it, big plays.”

No revenge factor for Steinauer

“You can growl, you can roar, you can do media,” Steinauer said. “The game is to be played and not talked about.

“It’s about execution and the team that executes the best will have the best opportunity to win. There really is not a revenge factor or a get even [factor], this is about 60 minutes of football or more and trying to get a win.”

CFL players and coaches routinely talk about the importance of starting fast. But scoring first hasn’t been nearly as crucial so far in the league playoffs.

Over the four post-season contests, the team that scored first did not register the victory. In the regular season, the squad that opened the scoring won 59 per cent of the time (37-26).