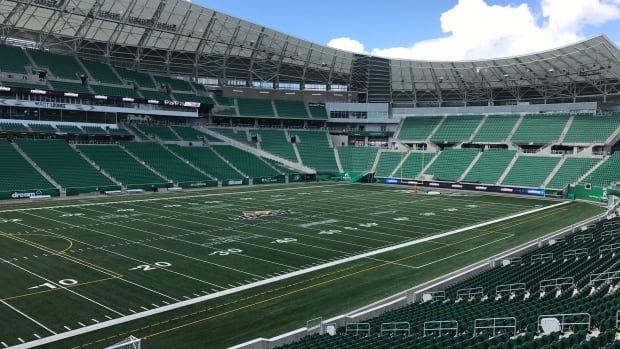 The Saskatchewan government says it’ll chip in $3 million in as part of a bid for the Canadian Football League’s hub city — if there is a CFL season to be played.

“The Government of Saskatchewan is pleased to commit $3 million as part of the Saskatchewan Roughriders’ bid to be the hub city for the 2020 season, provided the one-hub city model is approved by health officials and the Canadian Football League and Regina is selected as the hub city,” a statement from Gene Makowsky, minister of parks, recreation and sport said.

Mosaic Stadium was to play host to the 2020 Grey Cup before it had been cancelled and postponed to 2022 because of the COVID-19 pandemic.

Manitoba’s provincial government had put forward its own $2.5 million bid for the hub city designation on Monday.

Regina Mayor Michael Fougere said the city made an in-kind donation worth about $1 million to allow the use of Mosaic Stadium for games and Leibel Field for practices, if the bid is successful.

“We want the sanction of the chief medical health officer and that’s critical to make this work,” Fougere said Monday afternoon.

Fougere added the bid is not a guarantee as city council would have to discuss the matter, and re-emphasized the event would need the OK from Dr. Saqib Shahab, the province’s top doctor.

The mayor said Mosaic Stadium is the best stadium in the CFL and that he thinks Regina is the “better” city, though admitted bias clearly and plainly before making statements.

“[The bid] came together in short order and we should know in the next week or two as to what happens,” the mayor said. “I’m hoping that people will be happy to see this.”

In a statement, Arielle Zerr, the Roughriders director of communications, said the organization put the “competitive” bid together with the help of the province, the City of Regina and the Regina Hotel Association.

“We are proud of the package that we put together,” the statement said, citing the economic benefit that could be had from hosting a condensed CFL season within Saskatchewan.

“We are excited about the opportunity of potentially being a hub city, but whether we win the bid or not we support the CFL and are hopeful that we can get back on the field and play football in 2020,” the Riders’ statement concluded.