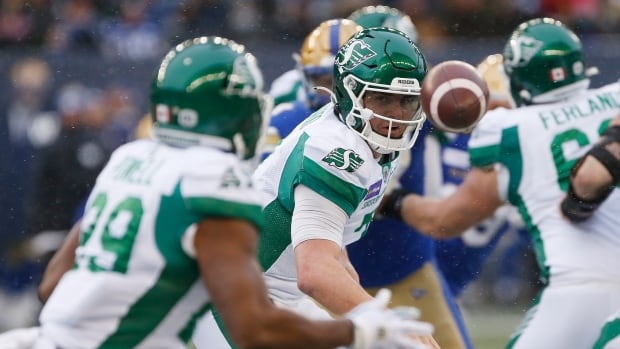 The Saskatchewan Roughriders and starting quarterback Cody Fajardo have agreed to a restructured contract for the 2022 season, the CF team announced Monday.

Fajardo was the West Division’s outstanding player in 2019, his first with the club, when he threw for 4,302 yards and 18 touchdowns while rushing for 611 yards and another 10 touchdowns.

The California native signed a two-year contract extension in October of 2019 and extended his deal through 2022 in January of last year.

“Cody has always been the definition of a team player, and this is just another example of that,” Roughriders vice-president of football operations Jeremy O’Day said in a release. “His leadership both on and off the field has been a large part of our success, and we appreciate his team-first mentality as we head into the 2022 season.”

Both players are Canadian.

The six-foot-two, 200-pound Onyeka, of Brampton, Ont., had 24 tackles and seven special-teams tackles in nine regular-season games. He also suited up for the Riders’ 21-17 loss to Winnipeg in the West Division final.

The six-foot-two, 200-pound Picton had 25 catches for 218 yards and a TD over 10 regular-season games last season. Saskatchewan selected the Regina native in the fifth round, No. 37 overall, in the 2017 CFL draft out of the University of Regina.

Picton began his time with the Riders on the practice roster before appearing in two regular-season games in 2019.