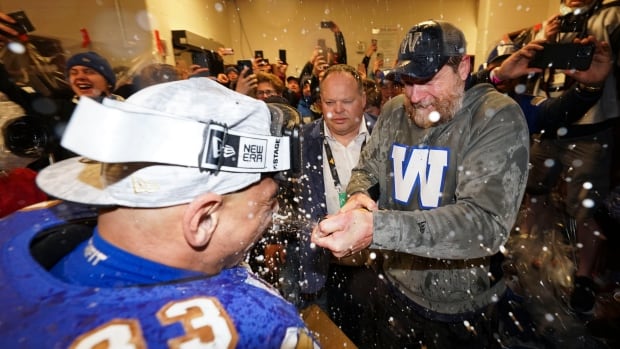 Quality rest has been hard to come by for Tiger-Cats head coach Orlondo Steinauer over the last two nights, with thoughts of his team’s painful Grey Cup overtime loss still swirling in his head.

“Not a lot of sleep to be had,” Steinauer said. “It’s going to take a few more sunrises to put this one behind us.”

Hamilton let a second-half lead slip away Sunday night as the Winnipeg Blue Bombers came back for a 33-25 victory at Tim Hortons Field. The result extended the Ticats’ Grey Cup drought to 22 years and counting.

Steinauer met with players and staff on Tuesday morning for the final time this year. He later kicked off a season-ending media availability via Zoom that included appearances by several top players.

Steinauer said he was proud of his team and had no regrets.

“These guys went out there and did what we asked them to do,” he said. “They played physical, they played hard, we were lining up to win. What else do you want?”

With a raucous home crowd cheering them on, the Tiger-Cats led 19-10 after three quarters but Winnipeg stormed back with 15 points in the fourth. Hamilton needed a 13-yard field goal with six seconds left to force overtime.

Winnipeg scored a touchdown in the extra session and added a two-point conversion. Hamilton got a chance to answer but an interception ended the game.

“Yesterday was kind of like a hangover day to be honest with you,” said lineman Chris Van Zeyl. “Not so much in the sense that I went out and drank a bunch but as far as the numb feeling and empty feeling of losing.

“For us to be as close as we were and fall short, for the effort we put in, for all we sacrificed all year, for all those factors, it hurts.”

Steven Dunbar and Brandon Banks scored touchdowns for Hamilton. Michael Domagala had three field goals and two converts with the other points coming on a safety.

One play that will continue to be debated is whether Tim White should have returned a Winnipeg kickoff with two minutes left instead of dropping to a knee and conceding a single.

Hamilton was playing into the wind, but the single left the Tiger-Cats needing a field goal for the tie instead of the lead. Starting from the 35-yard line, Hamilton still marched down the field and nearly scored the go-ahead touchdown.

With about 10 seconds left, Jeremiah Masoli threw a pass just inside the end zone to Jaelon Acklin, but Deatrick Nichols deflected just enough of the ball to force an incompletion.

“I truly thought that and I didn’t think any different when the game went to overtime and it just didn’t work out.”

Hamilton was trying to win a Grey Cup at home for the first time since 1972. The Tiger-Cats’ overall Grey Cup record slipped to 8-14.

“I’m sick to my stomach,” Banks said. “I don’t know, it’s hard to put into words. It’s a sick feeling. Obviously the only thing that can heal this is time.”

The focus now turns to the off-season for a team that could see plenty of roster turnover in 2022.

Masoli and fellow pivot Dane Evans, who left Sunday’s game in the second quarter after aggravating a neck injury, are two of the more notable players who will soon be eligible for free agency.

Evans said he first suffered the injury in the East final win in Toronto a week earlier and was awaiting MRI exam results.

Reports have indicated the University of Washington is interested in Steinauer for its defensive co-ordinator position. The 48-year-old coach said he has not been contacted by anyone from the school.

Winnipeg also beat Hamilton 33-12 in the 2019 championship game in Calgary.