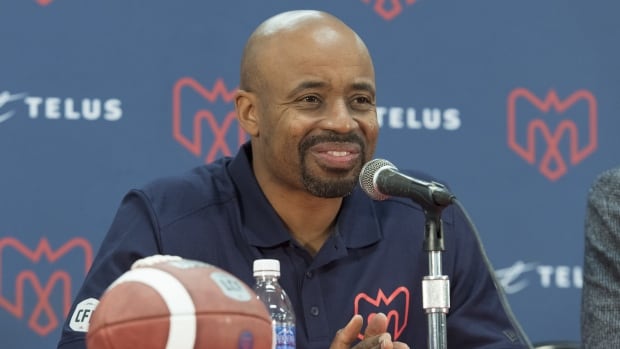 With the 2020 CFL season cancelled due to the COVID-19 pandemic, Montreal Alouettes head coach Khari Jones now has the opportunity to focus on his other passion — acting.

He’s in an American commercial for Optum Perks, a service that lets people find prescription discounts, that’s airing now on U.S. networks. Seeing him in that commercial caught a few people off guard.

“I got a lot of people contacting me, telling me, ‘there’s a guy who looks and sounds like you in a commercial.'”

Jones is American and during his time at the University of California, Davis, he played on the football team and acted, something he continued to do during his CFL playing days.

“I was in a lot of plays in college and when I was playing in the CFL, I would return to San Francisco, where I was living during the off-season, and act.”

Acting allowed him to land some minor movie roles and meet his wife Justine — she was an actor at the same university.

Jones and his family now call Surrey, B.C. home. With no CFL season, this was the first time in years that he had free time to act. He touched base with his acting agent in Vancouver, who suggested going out to some auditions.

“So far, it has been fun. It’s been fun to exercise that acting muscle again.”

The 49-year-old former quarterback is no stranger to being on camera; in addition to being shown during CFL broadcasts, he spent time working as a sports reporter at CBC.

But despite that, he says his two teenage daughters really get a kick out of seeing him acting on TV.

“As soon as they see me in a commercial they get excited. I’m like, ‘you see me on TV all the time.’ It’s kind of funny.”

Don’t expect to see Jones leave Montreal for Hollywood anytime soon. As much as he loves acting, it is only a part-time gig.

His desire to be back on the sidelines, coaching the Alouettes, is what drives him and he’s hopeful he will be back coaching soon enough.