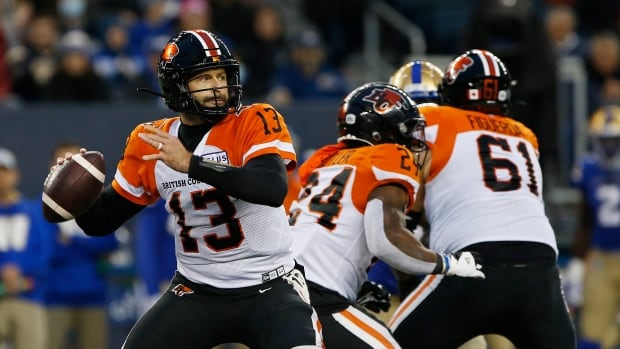 After leading the CFL in passing once again last season, Michael Reilly is hanging up his pads.

The B.C. Lions quarterback announced his retirement Monday after 11 seasons in the league.

“When you draw up quarterbacks, Michael Reilly is the kind of quarterback you want. He can do everything for you,” said Neil McEvoy, B.C.’s co-general manager and director of football operations.

The 36-year-old from Kennewick, Wash., first joined the Lions in 2010 and played backup for three seasons, including 2011 when B.C. won the Grey Cup on home turf in Vancouver.

Just as his contract was about to expire in 2013, the Lions dealt Reilly to Edmonton, where he became a dominant starter and played six seasons. He won a second championship title in 2015 and was named Grey Cup MVP.

Rick Campbell remembers the game well. At the time, he was coach of the Ottawa Redblacks, who Edmonton beat 26-20. Reilly finished 21-of-35 passing for 269 yards with two touchdowns and no interceptions.

Now Campbell is head coach and co-GM of the Lions, and had an opportunity to work with Reilly during the 2021 season.

“I had a lot of respect for him, seeing him from the other sideline,” Campbell said. “He does all the things you hope a football player does. He’s good on the field but also just super competitive, loves the game, he’s a great teammate, a great leader, all those things.”

Reilly impressed once again in 2017, earning the CFL’s most outstanding player award with career-highs in passing yards (5,830) and touchdowns (30).

In 2019 Reilly returned to B.C., saying he wanted to bring the Grey Cup back to Vancouver.

His second stint with the Lions was difficult, however. A broken wrist ended his 2019 campaign and the COVID-19 pandemic scrubbed the CFL’s 2020 season.

During the break, the star quarterback went through a contract grievance with his team before settling and renegotiating his deal to stay on through 2022.

An elbow injury to his throwing arm kept Reilly out of the first game of 2021 and nagged throughout the season.

The Lions finished the year out of the playoffs with a 5-9 record but Reilly still managed a league-high 3,283 passing yards with 14 touchdowns and six interceptions.

‘Mike was able to put you in a position to win’

It was the fourth time he’d led the league in passing, following three straight seasons (2016-2018) in Edmonton.

“Whenever we had the football, we always had a chance to win because Mike was able to put you in a position to win,” McEvoy said. “Not all quarterbacks have that allure. He was just one of the guys that have that.”

Reilly finishes his career with 34,805 passing yards and 182 touchdowns over 168 games.

While McEvoy and Campbell couldn’t say for sure what the future holds for Reilly, the Central Washington University product previously started training to be a firefighter.

“I think it’s cool for him that he can go out on his own terms, where he didn’t literally have to limp off the field,” Campbell said. “He’s healthy, he’s happy, he’s got some young [daughters] at home, he’s got a great family. I’m sure those were all factors for him.”

“He’s an 11-year professional athlete and when you start to get into the double digits, you start to think about your future and Michael is no different,” he said.

“Our plan is that Nathan Rourke will be the starter,” he said. “And we’d like to add a veteran CFL quarterback to the mix.

Rourke, a 23-year-old from Victoria, B.C., started the Lions’ final game of 2021, passing for 359 yards, a touchdown and two interceptions in a 43-10 win over Edmonton. He also added three rushing TDs.

“I just don’t see [Rourke] changing much,” Campbell said. “He’s going to continue to work hard and do this thing.”

The Edmonton Elks signed running back James Wilder Jr. to a one-year contract extension on Monday.

Wilder, who was scheduled to hit the free-agent market next month, racked up 996 total yards and three touchdowns in 2021.

The Florida State product finished third in CFL rushing yards (770) last season and was named the Elks’ most outstanding player.

Boateng had eight defensive tackles and one special teams tackle in 12 games during his rookie season in 2019.

He worked out with the Green Bay Packers in August.

The Saskatchewan Roughriders bolstered their roster on Monday with the signings of wide receiver Darvin Kidsy and defensive back Will Sunderland.

Kidsy, who split his college football career between North Texas and the University of Texas, spent parts of two seasons with the Washington Football Team after signing with the club as an undrafted free agent in 2018.

He spent most of last season on the Seattle Seahawks’ practice roster.

Sunderland, meanwhile, signed with the Green Bay Packers as an undrafted free agent out of Troy University in 2020.

He later spent time with both the Indianapolis Colts and Seahawks, playing in three pre-season games in 2021.

Williams, who was set to become a free agent next month, played all 14 games with the Stamps last season, including 13 starts at left guard.

“I’m thankful to the Stampeders organization for this opportunity and I’m looking forward to the season,” Williams, a third-round draft pick out of Manitoba in 2019, said in a statement. “I believe we have the players and coaches in place to be a serious contender for the Grey Cup.”

He is the fifth veteran offensive lineman to sign with the Stampeders this off-season, joining a group that includes holdovers Julian Good-Jones, Sean McEwen and Ryan Sceviour as well as the returning Derek Dennis, who had two previous stints in Calgary. Dennis suited up for the Edmonton Elks last year.

Morton and Bingham spent time on the team’s practice roster last year. Butler attended training camp with the Ticats but was released before the start of the season.

Both Morton and Butler have had brief stints with NFL clubs in the past. Morton spent time with the Indianapolis Colts and Green Bay Packers while Butler spent parts of two seasons on the New Orleans Saints’ practice squad.