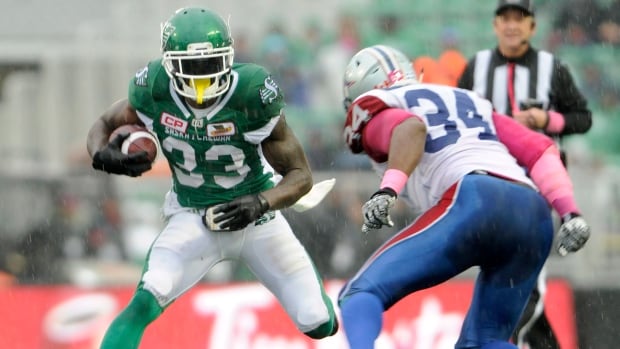 The man who killed former Saskatchewan Roughrider player Joe McKnight cannot be tried again on a murder charge, now that his conviction on the lesser charge of manslaughter has been overturned, a Louisiana appeal court ruled Thursday.

Authorities in the New Orleans suburb of Jefferson Parish originally charged Ronald Gasser with second-degree murder in the road rage shooting of McKnight, a standout high school football player in Louisiana who later played in the NFL and the CFL.

The jury came back with a lesser manslaughter conviction. But that verdict came on a 10-2 vote. It was thrown out, along with Gasser’s 30-year prison term, and a new trial was ordered after the Supreme Court ruled non-unanimous verdicts unconstitutional.

McKnight spent time with the New York Jets and Kansas City before coming north in 2016 playing first for Edmonton and then the Saskatchewan Roughriders, finishing the season with 228 rushing yards and 80 receiving yards over five games.

Prosecutors wanted another chance at seeking a murder conviction. But state District Judge Ellen Shirer Kovach ruled in February that trying Gasser for murder again would violate his constitutional protection against double jeopardy.

On Thursday, the state 5th Circuit Court of Appeal agreed in a 2-1 panel ruling.

“At the time of defendant’s trial in the present case, a unanimous verdict was not required by Louisiana law in order to acquit a defendant,” Judge Hans Liljeberg wrote in an opinion joined by Judge Robert Chaisson. “Therefore, when the jury returned a ten to two verdict of guilty of manslaughter, it served as a valid acquittal of the second degree murder charge, precluding retrial of defendant for second degree murder based on the principles of double jeopardy.”

“It seemed fairly obvious to us that the Double Jeopardy clause prevented the state from trying Mr. Gasser for murder a second time after his prior acquittal on that charge,” Gasser’s attorney, Dane Ciolino, wrote in an email Thursday night. “We are glad that both the district judge and appellate court agreed. We hope that the state doesn’t waste any more time and money to appeal this any further.”

McKnight was a high school football hero at Louisiana’s John Curtis Christian School who played three seasons for the New York Jets and one with Kansas City.

Gasser fatally shot McKnight on Dec. 1, 2016, after what authorities described as a rolling a 5-mile (8-kilometre) traffic dispute and chase over a New Orleans area bridge.

Witnesses at the 2018 trial said McKnight had been weaving in and out of traffic at high speed before the shooting — one prosecutor acknowledged to the jury that he was “driving like a jerk.” But prosecutors argued that Gasser escalated the conflict, following McKnight down an exit that he would not ordinarily have taken.

Gasser’s defenCe team insisted he fired at McKnight in self-defense.