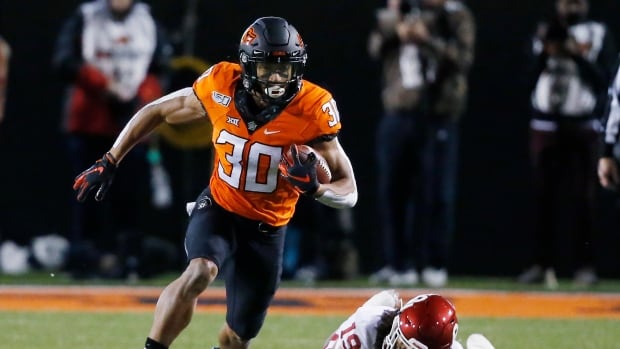 As last season’s NCAA rushing leader, Chuba Hubbard was a deserving winner of the Jon Cornish Trophy as the top Canadian in U.S. college football.

Hubbard, who is Black, threatened to boycott the OSU program after Gundy was photographed wearing a T-shirt promoting the One America News Network. The cable channel has been critical of the Black Lives Matter movement.

Gundy, who is white, later apologized.

“Obviously his football stats speak for themselves,” Cornish said during a telephone interview. “But I think what Chuba also showed is that he’s a remarkable person.”

The six-foot-one, 207-pound Hubbard ran for 2,094 yards on 328 carries (6.4-yard average) with 21 TDs last year. But he was a distant eighth behind winner Joe Burrow, a quarterback with the LSU Tigers, in voting for the Heisman Trophy, given annually to U.S. college football’s top player.

No Canadian has ever won the Heisman. In fact Hubbard was just the fourth Canuck to be nominated, joining Washington State running back Rueben Mayes (North Battleford, Sask., 10th in 1984), Michigan State offensive lineman Tony Mandarich (Oakville, Ont., sixth in 1988), and Michigan running back Tim Biakabutuka (Montreal, eighth in 1995).

Cornish played collegiately at Kansas then spent nine seasons with the CFL’s Calgary Stampeders before retiring in 2016. Last year, the native of New Westminster, B.C., was a first-ballot inductee into the Canadian Football Hall of Fame, only the 20th player and second running back to do so.

But Cornish feels Hubbard wasn’t given enough consideration for the Heisman Trophy. Hubbard was also a finalist for the Doak Walker Award as American college football’s top running back.

“It’s hard to have a 2,000-yard rusher that’s not further up in the Heisman voting,” Cornish said. “Obviously Oklahoma State wasn’t a top contender but I did think Chuba deserved more respect.”

“It’s just another continuing evolution, just the same as the [Canadian] running back in the CFL. Now we’re having starting running backs in [U.S.] college football, Chuba Hubbard broke 2,000 yards. Now maybe it needs to be the next Jesse Palmer that goes down and dominates in college and legitimately wins the Heisman. It’s always been hard for running backs to win in the first place.”

Palmer, of Ottawa, played quarterback at the University of Florida (1997-2000). He was selected in the fourth round of the ’01 NFL draft by the New Giants and also spent time with the San Francisco 49ers (2005) and CFL’s Montreal Alouettes (2006).

But Cornish admits it would be a huge boon for football in this country if a Canadian ever won the Heisman.

“It would definitely be cool to see,” Cornish said. “I think the Lou Marsh Trophy [presented annually to Canada’s top athlete, which Cornish won in 2013] would most definitely go to a person who won the Heisman Trophy.

“At the end of the day, it’s an American award given in an American sport and for a Canadian to dominate… I think that would garner the highest respect we can give an athlete in Canada.”

Cornish said the trophy named after him will always recognize Canadian collegiate players excelling south of the border.

“To have a mechanism… to show Canadians in Canada still in high school that you can play U.S. college football, I think is a great way to keep interest in the sport,” Cornish said. “I think it really highlights the best Canada has to offer.”