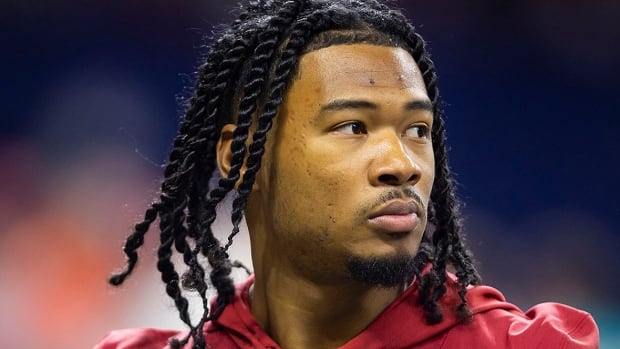 Rourke won his awards in 2017-18 while at Ohio University.

However, Metchie becomes the first unanimous selection in voting conducted by a national media panel.

The six-foot, 187-pound Metchie recorded a team-high 96 catches last season at Alabama for 1,142 yards and eight touchdowns before suffering a season-ending knee injury in the Tide’s 41-24 win over George in the SEC title game Dec. 4.

That forced Metchie to miss the school’s playoff run, which ended with a 33-18 loss to the Bulldogs in the NCAA championship contest Jan. 10.

Despite the injury, Metchie opted to skip his senior season at Alabama and declare for the 2022 NFL draft. Earlier Tuesday, Metchie was named the top-ranked prospect on the CFL Scouting Bureau’s top-20 list for the league’s May 3 draft.

“It feels great,” Metchie said of the back-to-back Cornish awards. “It’s always great to be recognized by your country and your peers.

Metchie said he’s ahead of schedule with his rehabilitation, which is good news heading into the NFL draft, slated for April 28-30.

“I definitely have a history of facing adversity, both on the field and off of it, and this isn’t anything different,” he said. “Recovery-wise, my knee has been doing really well, and I’m ahead of schedule.

“No speed bumps over the last four months, and I’ve been running for over a month now.”

Luketa had 61 tackles (8.5 for a loss) in 12 games as a linebacker/defensive end for Penn State. The six-foot-three, 253-pound Luketa also had an interception return for a touchdown and is eligible for the ’22 NFL draft.

The six-foot-six, 190-pound Mardner registered 46 catches for 913 yards (19.8-yard average) and five TDs last season at Hawaii. Mardner exercised the transfer window in December and will play at Cincinnati.

Wayne was the second-leading receiver at Pitt last season with 47 catches for 658 yards and six TDs after starting four of the 13 games he appeared in. The six-foot-three, 210-pound receiver is a former high-school quarterback and completed two-of-three passes for 36 yards and a touchdown.