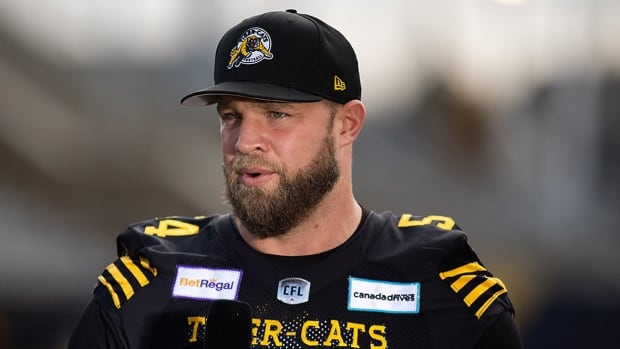 Even on his worst days, Chris Van Zeyl has never had to worry about having a roof over his head, a warm bed to sleep in or where his next meal was coming from.

On Friday night, the Hamilton Tiger-Cats veteran offensive tackle will again leave the comfort of his Burlington, Ont., home and spend the night in his Dodge Charger to help bring awareness to homelessness.

“You look at how extremely lucky and privileged we are to have a house and a warm bed, it’s very sobering,” Van Zeyl said in a telephone interview. “It’s very tough to digest at times that this is a reality for some people.

“It definitely makes you look in and realize how lucky and fortunate you are.”

This marks the second straight year that Van Zeyl, 38, will participate in the Sleepless in Our Cities initiative spearheaded by United Way Halton & Hamilton. The program supports those facing homelessness, poverty, and unemployment.

Van Zeyl won’t start up the vehicle during the night. And once again, the native of Font Hill, Ont., is accepting donations for the program on his Instagram and Facebook pages.

For me, it’s one night. For [those homeless] it could be several nights or the entire winter.— Tiger-Cats offensive lineman Chris Van Zeyl on spending a night in his car

An avid outdoorsman, Van Zeyl knows all about dressing for the elements. But nothing prepared the two-time Grey Cup champion for the challenge of trying to sleep in a car during the winter.

“It was an eye-opening experience,” Van Zeyl said. “It kind of brings to light many of the struggles and what some people must endure.

“For me, it’s one night. For them, it could be several nights or the entire winter. I mean, it was -10 C and there’s a lot colder nights throughout the winter. Again, it’s very sobering.”

“I try to think of having my entire family sleep in that car,” said Van Zeyl, a married father of two children (three-year-old son, Colton, and one-year-old daughter, Adelyn). “When you start to put it all together, it becomes a very sombre moment where you’re like, ‘Oh my goodness, this is something people have to do every day.’

“There’s some really cold nights where people have to be in their cars or wherever they can find shelter.”

Despite being bundled up in winter clothing and having a sleeping bag, Van Zeyl said he never felt warm.

“I remember having difficulty getting to sleep,” he said. “Then, when I did open my eyes at about 6 or 7 a.m. and looked around, the condensation from my breath had frozen the inside of the windshield.

“Despite it being frigid and my whole body being cold … I remember looking around and thinking, ‘Oh, that’s beautiful.’ It was crystallized, it was like diamonds all over the inside of the window. But then you also think, ‘Oh my goodness, people have to do this.’ And it’s not just adults and people who’ve fallen on hard times, it’s also their families in many cases.”

Van Zeyl is entering his 14th CFL season and third with Hamilton.

A three-time league all-star, Van Zeyl was its top lineman in 2019 and last year received the Jake Gaudaur Veterans’ award.

It’s presented annually to the Canadian player who embodies the attributes of Canada’s veterans. Throughout his CFL tenure, Van Zeyl has always participated in community programs.

“You have the opportunity to do something to help people, I probably say this too much, it’s a no-brainer for me,” Van Zeyl said. “To be able to contribute to both my community and society in general and do something that impacts people who’re going through this on a daily basis, without question it’s an easy decision.

After participating in the United Way program last year, Van Zeyl predictably received plenty of positive feedback from the community.

While appreciative, Van Zeyl said that’s not why he gets involved\ with such ventures.

“It’s nice for someone to appreciate what you’re doing … but you don’t look for any kind of reward or anything of that nature,” he said. “Honestly, it’s nice just to be able to contribute and to help people.