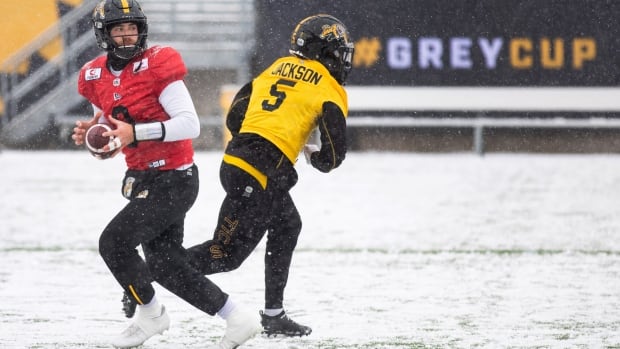 “He was drenched in sweat, just getting ready for the game and stuff, getting his warm-ups in,” said Lawrence. “He’s the ultimate pro. He goes about it every day like he’s a starter. That’s like how all our quote-unquote backups are.”

Jeremiah Masoli started for Hamilton last weekend in Toronto but it was Evans, coming off the bench, who sparked the comeback that got the Ticats to Sunday’s Grey Cup against Winnipeg. Evans completed all 16 passes he attempted in Hamilton’s 27-19 comeback victory over the Argonauts.

He also made a key play in the second quarter, fighting off a block to strip the ball from Argos defensive back Shaquille Richardson after a Hamilton fumble.

“Right out of the chute, huh?” Steinauer said in answering the second question of the coaches’ news conference. “Dane will start for us.”

Evans made three starts this season compared to nine for Masoli and two for David Watford for the 8-6-0 Tiger-Cats.

Still the decision to start Evans was no surprise, given his performance against the Argos. Evans also has Grey Cup experience, having started in the 2019 championship game, completing 16 of 27 passes for 203 yards with one touchdown and two interceptions in a 33-12 loss to the Bombers.

Evans said he didn’t watch video of the 2019 game for a month.

“And then it seemed like when the world shut down, that’s all freaking TSN wanted to play was the Grey Cup. And I was like ‘Jesus Christ, do we have any other things to put on here?”‘ he said, drawing laughs.

“But in the same breath, obviously Winnipeg came to play and they got after us that day. I’m not taking anything away from them. They were the better team that night and they’ve been a great team this year too.”

Evans said four months into lockdown, “when I saw it for the 40th time,” he moved past the 2019 game.

“It took a while to digest,” he said.

Evans, 28, took over the team in 2019 after Masoli tore his anterior cruciate ligament six games into the season — a July win over the visiting Blue Bombers. But the 33-year-old Masoli has seen more action than Evans since returning to action.

Evans credits Masoli for helping him grow as a CFL quarterback

“It was never easy. Because personally I don’t like letting people down. But you’ve got to make a decision. That’s what I get paid to do.”

While thankful at the opportunity, Evans downplayed his promotion.

“Like I said last week, it’s not really about me, it’s about the team. I’m excited about it obviously but I’m not making it bigger than it is,” he said.

And he credits Masoli for helping him grow as a CFL quarterback.

“I just try to pick his brain with anything I can,” he said. “Because he’s a very good football player and I like the way he sees the game.”

Born in Oklahoma, Evans attended high school in Texas before moving to Tulsa when he was 18. He has Native American roots — a member of the Wichita tribe through his father’s side of the family.

The six-foot-one 218-pounder spent five years at the University of Tulsa, leaving in 2016 as the Golden Hurricanes’ all-time leading passer. He signed with Hamilton in October 2017 after being cut by the Philadelphia Eagles.

Steinauer said Evans has grown since the 2019 Grey Cup, able to make quicker decisions and learn from his experiences.

“Just been there. Dealt with different personalities. Hunger, disappointment, all the emotions that you would go through when everything is on your shoulders, quote-unquote, as a quarterback ΓÇª he can make all the throws on the football field.

“He’s a different leader than Jeremiah. You’re going to see more emotion. That’s who Dane was when I was working with him on the scout team. Like he’s competitive. He wanted to complete every ball even though you’re telling him where to throw it.”

The Bombers have taken notice.

“He knows what he’s doing. He knows what he’ll be looking at. He knows how to take control of the offence. He’s done it before. He’s played in big games. He’s a dude over there. So we’ve got something to look out for.”

“A great quarterback. But for me, the best thing about him is just how he acts off the field,” he said. “And how when things aren’t going great or we’re in a bad situation, he’ll come off the field and tell us ‘Hey, he’s got our back. We’ve just to get him the ball one more time and he’ll figure it out.”‘

“That’s just kind of the attitude we have around here. It’s not asking who can do it, it’s just grabbing a shovel and doing it,” said Evans.

The Ticats took time out to cheer owner Bob Young when he came into the stands to watch training.