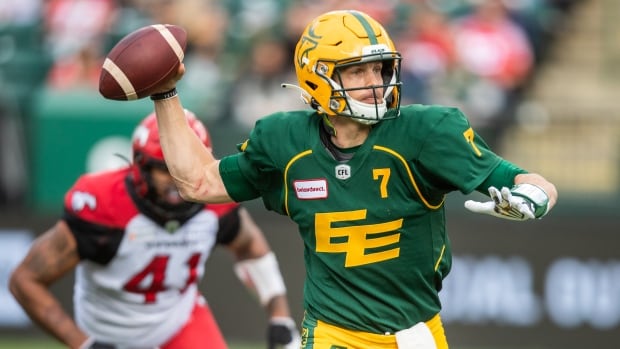 Veteran quarterback Trevor Harris is heading back to the East Division.

The Edmonton Elks traded Harris to the Montreal Alouettes on Sunday for defensive end Antonio Simmons. Both players are Americans.

The deal wasn’t surprising given Harris was a healthy scratch for Edmonton’s 26-16 home loss to Winnipeg on Friday night.

Rookie Taylor Cornelius was given the start with veteran Dakota Prukop serving as the backup.

Cornelius finished 17-of-29 passing for 187 yards and a TD against Winnipeg while rushing for 19 yards on four carries.

Harris’s last action with Edmonton was in a 30-3 loss to Winnipeg on Oct. 8.

He started the contest and completed 9-of-22 passes for 87 yards before he was replaced by Cornelius.

Edmonton (2-7) is last in the West Division under first-year head coach Jamie Elizondo.

Elizondo and Harris were together in Ottawa (2016-18) as Harris was the Redblacks’ starter and Elizondo served as their offensive co-ordinator and quarterbacks coach.

Also, Edmonton GM Brock Sunderland was in Ottawa’s front office before joining the Elks in 2017.

He signed with Edmonton as a free agent prior to the 2019 campaign.

‘Knows the league well and what it takes to win’

Montreal (5-4) is second in the East Division standings following its 27-16 win over Ottawa on Saturday.

With incumbent Vernon Adams Jr. (shoulder) on the six-game injured list, backup Matthew Shiltz completed 21-of-34 passes for 281 yards and a TD and an interception.

Shiltz also rushed for a touchdown to secure his first CFL win as a starter.

“Trevor is a veteran who knows the league well and what it takes to win,” Montreal GM Danny Maciocia said in a statement. “We are pleased to have been able to complete this transaction.

“We are confident that Trevor will work well with our quarterbacks. We thank Antonio for his services and wish him well.”

There were rumours Edmonton and Montreal began talking about a deal involving Harris after Adams Jr. was injured in the Alouettes’ 20-16 win over Ottawa on Oct. 11.

Harris reportedly has a year remaining on his current contract that’s also said to include a $300,000 roster bonus due Feb. 1, 2022.

Harris, who played collegiately at Edinboro, has appeared in 139 career CFL regular-season games.

Simmons, in his second CFL season, recorded seven tackles and two sacks in five games for the Alouettes this season.

Simmons played collegiately at Georgia Tech (2014-17) and spent time in the NFL in 2018 with the Denver Broncos and Tampa Bay Buccaneers.